Seattle Times: At Elwha River, forests, fish and flowers where there were dams and lakes 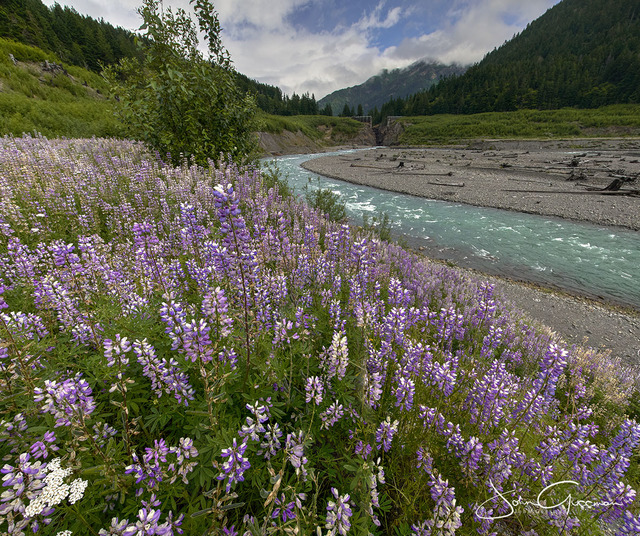 Lupine has been a surprise star player in recovery of former lake beds along the Elwha River, and chinook are reaching higher and farther into the watershed than ever before.

OLYMPIC NATIONAL PARK — With easy road access to trails open for the first time in years, and the river valley in full summer splendor, the Elwha beckons as never before.

Where once there was a dam, today tourists are enjoying the newest interpretive attraction at Olympic National ark, about the world’s biggest-ever dam-removal experiment.

Visitors can perch on an overlook made from remnants of the former Glines Canyon Dam, and look down 210 feet to where the Elwha River now rushes past in a foaming green slide. Recordings and interpretive signs along the viewing platform explain the project that began with the removal of Elwha Dam in 2011 and continued with the takedown of Glines Canyon Dam, completed in 2014.

The transformation of the landscape following the dam removal on the Elwha River beginning in 2011 is well underway as forests and flowers flourish where there were once lakes. (Courtesy of Doug MacDonald)

The Glines Canyon Overlook is handicapped-accessible, and offers expansive views of the Elwha River above and below the former dam site. A marked trail to the riverbed departs from the overlook.

It winds past stumps of old-growth trees cut before the dam was built, and the new forest rising on the former lake bed.

Lupine along the trail have been a surprising star of the recovery project. Purple, fragrant carpets of the flower in the former Lake Mills are alive with white-crowned sparrows, nesting and singing. The flowers buzz with pollinators.