Scientists to Administrator Will Stelle: NOAA must act on climate change and salmon 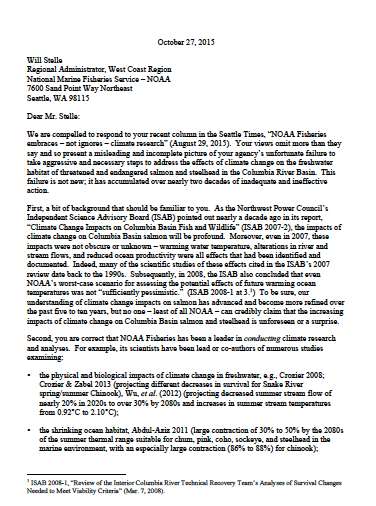 This Letter was drafted in large part in response to Mr. Stelle’s op-ed in the Seattle Times on August 29 (link below). Mr. Stelle’s op-ed was itself a response to an Aug. 2 op-ed (also below) by Pat Ford charging that NOAA has taken/is taking very little meaningful action to help ensure the survival of Columbia/Snake River salmon and steelhead faced with intensifying climate impacts.

This past summer, for example, the Northwest experienced high, prolonged temperatures in June and July and low stream flows (due to low snowpack) in the Columbia Basin. These conditions, in combination with the dam-created reservoirs on the Columbia  and Snake Rivers, raised water temperatures above the survival range for many salmon and steelhead. An estimated 250,000 adult sockeye were killed by these hot water conditions in the Columbia and Snake Rivers this summer. Other species were also harmed and killed in large numbers, including scores of imperiled sturgeon, chinook, and others.

While Summer 2015’s conditions may have been unusual, they were not unexpected. They are exactly the types of conditions long predicted by scientists in and out of NOAA-Fisheries. Despite these predictions, NOAA’s Columbia Basin salmon plans have contained virtually no meaningful strategies or measures to address or mitigate these types of hot water episodes. Last summer, NOAA and other agencies did respond on a last-minute ad hoc basis in an effort to assist struggling fish populations. The benefits of these efforts so far appear to have been very limited.

Here are links to the two op-eds that appeared in the Seattle Times this past August that helped spur these 8 scientists into action in the form of a letter to Regional Administrator Stelle.

Coincidentally, this letter is being sent just after the following article on NOAA’s report on the extremely poor survival of juvenile salmon in Summer 2015: Preliminary 2015 Spring Juvenile Survival Estimates Through Snake/Columbia River Dams Dismal – the main conclusion of a recently released NOAA Fisheries report on juvenile salmon survival this summer in the Basin.