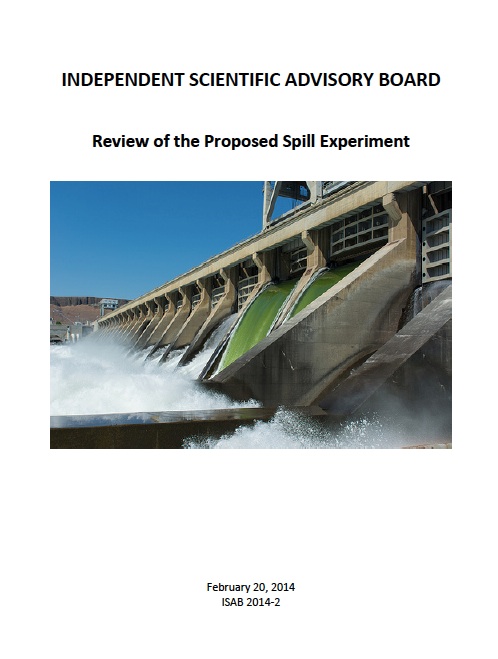 The bottom line: ‘Spilling’ water over Columbia and Snake River dams is good for salmon. It helps young fish make the trip to the Pacific more safely, and it helps them better survive in the ocean to return a few years later as adults. As long as the dams remain in place, spill is our most effective near-term measure for improving salmon survival. We know this from nearly 20 years of data about salmon – data that has been collected and analyzed by state, federal, and Tribal fishery scientists working cooperatively as part of something called the Comparative Survival Study (CSS).

Last year, CSS scientists released findings that indicated expanding spill above and beyond current court-ordered levels could allow some imperiled Columbia-Snake salmon runs to rebuild and even recover. Indeed, expanded spill could possibly double the number of fish returning to Idaho.

Because these findings are so promising, the State of Oregon proposed an experiment to put expanded spill to the test in real-world/real-river conditions. Oregon submitted its proposal last Fall to the Northwest Power and Conservation Council (NPCC) as a recommended amendment to the Council’s updated Fish & Wildlife Program, which is currently being drafted. As part of its consideration of Oregon’s spill proposal, the Council referred the proposal to its Independent Scientific Advisory Board (ISAB) for additional review earlier this winter.

On February 21, the ISAB issued its review of the proposed spill experiment, determining that the proposal’s hypothesis has merit, and encouraging the development of a more detailed study design – one that addresses a number of key questions and issues identified by the reviewers – in order to move forward with a robust test of expanded spill.

Below is Save Our wild Salmon’s statement on the ISAB review.

You can download and read the ISAB Review here.

Oregon’s proposal is strongly supported by conservation and fishing groups, the Nez Perce Tribe, and the Pacific Fishery Management Council. The Northwest Power and Conservation Council sought the ISAB review to inform development of its 2014 Fish and Wildlife Program.

The ISAB concludes that testing the proposed spill experiment’s hypothesis has merit and “offers an opportunity to use adaptive management that might improve [survival] of threatened and endangered salmon…and increase knowledge for future decisions.” The reviewers also identify several outstanding issues and questions for strengthening the spill test, and encourage the development of a more detailed proposal addressing those concerns.

Here is a statement on the ISAB review from Save Our Wild Salmon Coalition executive director Joseph Bogaard:

“This review is an important step in the Northwest’s ongoing conversation about the future of our efforts to restore Columbia Basin salmon and steelhead. We appreciate the ISAB’s thoughtful attention to this issue, and know that the review will be of value to the Council as it continues to develop its Fish and Wildlife Program amendments for 2014.

“The ISAB’s broad and long-standing recognition of spill’s role in boosting salmon survival is echoed in today’s review, as is its interest in ensuring that the Council’s program rests on a rock-solid scientific foundation. We are pleased the ISAB has determined that a spill experiment has merit, that it is likely to enhance our knowledge of spill and its effects on salmon survival, and that it is consistent with the need for and role of adaptive management. We believe answering key questions raised by the reviewers, where robust responses do not already exist, will strengthen the test design. One thing we know for sure – as the ISAB points out – is that salmon need more help now in order to reach survival levels that allow for recovery; spill is a proven way of providing that help.

“We trust the Council’s next steps will include working with Comparative Survival Study (CSS) scientists to seek responses to the ISAB’s questions as quickly as possible, such that a spill experiment can be considered as part of the 2014 Fish and Wildlife Program. Specifically, we agree with the ISAB that the CSS Oversight Committee should move forward with developing a more detailed study design, per the review’s recommendations. Doing so will continue to illuminate our shared understanding of spill and its tremendous potential for the Northwest, and lead to a spill experiment that expands our knowledge of what’s needed to recover our invaluable salmon runs.”