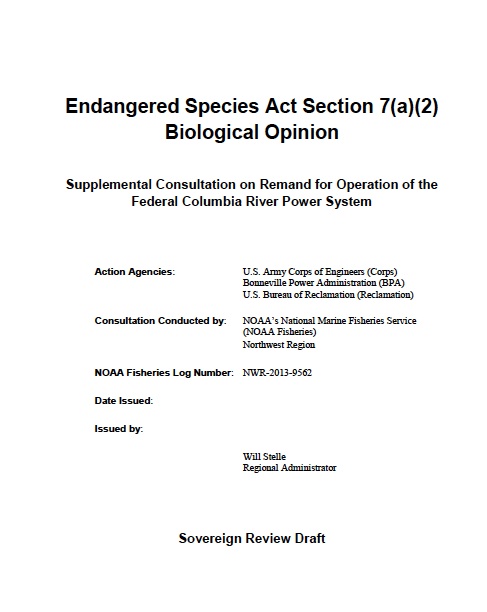 Another rehash of court-rejected plan omits meaningful salmon protections, undermines path out of the courtroom

“Unfortunately, this latest blueprint is virtually indistinguishable from the plan rejected by the district court in 2011," said Save Our Wild Salmon executive director Joseph Bogaard. “Rather than looking for ways to do more to safeguard imperiled salmon and bring people together, the federal agencies have spent the last two years coming up with new reasons for the same tired conclusions – choosing conflict over collaboration.”

Conservation and fishing groups, along with the State of Oregon and the Nez Perce Tribe, have successfully challenged previous salmon plans for failing to protect these treasured and invaluable Northwest icons. The groups expressed disappointment with the new plan, and the missed opportunity to change course for the salmon and people of the Columbia Basin.

“Today’s plan fails to help salmon or boost salmon jobs, and fails to lay the foundation for a broadly-supported stakeholder process that could work toward shared solutions,” said Glen Spain, Northwest regional director of the Pacific Coast Federation of Fishermen’s Associations. “And in some respects, such as cutting back spill, this version is actually a step backwards from what's already been thrown out of court as ‘illegal, arbitrary and capricious.’”

The federal plan not only squanders a chance to move the region forward, it also rolls back spill – water released over the dams to help migrating young salmon reach the Pacific Ocean more safely. A basic level of spill has been in place under court order since 2006. Federal, state, and tribal scientists studying the impacts of existing spill have concluded it is boosting salmon survival and adult returns. These same scientists predict that expanding spill could help recover some Columbia Basin salmon stocks. But instead of looking for ways to test that finding, NOAA Fisheries has ignored sound science and allowed dam operators to cut current spill to even lower levels.

“A 17-year study demonstrates that spill is our most effective immediate measure to increase salmon survival across their life-cycle,” said Northwest Sportfishing Industry Association executive director Liz Hamilton. “The court-ordered spill in place since 2006 has resulted in more adult fish returning to the Columbia. That’s helped salmon businesses and the jobs they support. Meanwhile, NOAA and Bonneville Power Administration seem to be stuck in the 1990s when it comes to spill science. We can understand dam managers’ reluctance to share the river water with salmon, but that doesn’t excuse their effort to turn back the clock and ignore 17 years of data from the fish.”

The plan also fails to identify any new or additional measures to address the intensifying impacts of climate change. “Climate change isn’t a future threat on the distant horizon – it’s already here and harming our imperiled salmon,” said Bogaard of Save Our Wild Salmon. “Yet NOAA – an agency that certainly knows better – didn’t include a single additional new action to help salmon better survive the warming waters and altered river flows that climate change is bringing to the Columbia Basin. That’s more than a missed opportunity – it’s negligence.”

Bill Arthur, deputy national field director for the Sierra Club, added that the federal government appears to be taking very seriously its obligations to reduce, reuse, and recycle.

“I’m all in favor of recycling, but this salmon plan takes the idea one step too far,” Arthur said. “The federal agencies have reduced in-river protections for salmon, reused flawed analyses that fail to ensure the long-term recovery of our fish, and recycled an old plan that the courts rejected more than two years ago. Rather than repackaging a failed plan and hoping for a different outcome, NOAA Fisheries should test expanded spill and employ other effective measures to help salmon and salmon economies while giving regional collaboration a running start - to help the Northwest move away from gridlock and toward real solutions that work.”