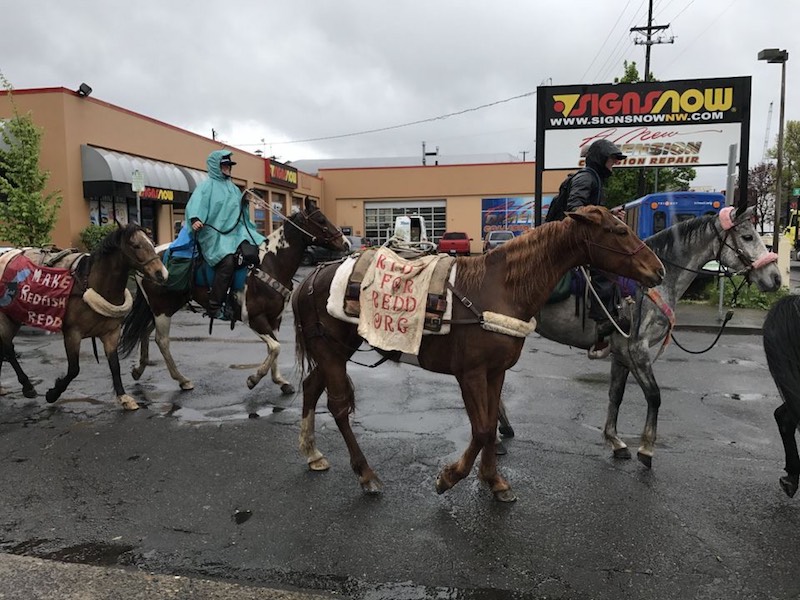 Three women rode horses through downtown Portland on Monday, part of a 900-mile journey to raise awareness about the plight of endangered Idaho salmon.

The trio are traveling roughly the same path imperiled sockeye salmon do, making their way up the Columbia, Snake and Salmon Rivers to the spawning grounds in Idaho's Sawtooth National Forest.

The trek started last week in Astoria, and the three Idaho residents opted to ride through the heart of Portland to draw attention to their cause.

The "Ride for Redd," a nod to the term for a salmon spawning ground, is backed by the nonprofit advocacy group Idaho Rivers United. Just before noon, the three riders crossed the Hawthorne Bridge and gathered on the Central Eastside.
Under a persistent afternoon drizzle, Kat Cannell, rode her father's horse, Hogan, past OMSI in Southeast Portland and outlined the trip's mission.

"The Columbia produces an amazing amount of salmon, and the ones that make it to our home swim 900 miles inland and 6,500 feet in elevation," Cannell said as she plodded along the roadway. Each rider had a pack horse alongside them.
"Our salmon are really at stake right now," she said. "Idaho is at risk of never seeing salmon again, and that's devastating."

Cannell, Katelyn Spradley and M.J. Wright, plan to finish their trip by June 2 at Redfish Lake in Idaho's Sawtooth Range.

Idaho horseback riders on salmon trek pass through Portland
Environmental groups have long pushed for the removal several dams on the lower Snake River to improve salmon habitat. "This is a huge undertaking that's about bringing attention to Idaho's endangered wild salmon, which are no better off now than when they were listed as endangered 25 years ago," Greg Stahl, an Idaho Rivers United spokesman, said in a statement.  "Since dams were erected on the lower Snake River, populations of wild fish from central Idaho — where there's a motherlode of intact habitat for salmon — have plummeted."

Last month, a federal judge ordered that more water be spilled over those dams as a way of bolstering fish survival. Last year, the same judge rejected the plan proposed by federal agencies and utilities to manage those dams and protect salmon, the fifth such dismissal of a federal management plan in a legal fight that dates more than 20 years. Environmental groups continue to call for the dams to be removed.
The riders, Cannell said, are depending on the kindness of strangers for much of their housing along the route.

Cannell said the horses can handle up to 30 miles of travel in a day. Monday night, the group plans to rest in a barn near Happy Valley.
They hope to reach Hood River in four days.

In total, the trip may take upward of 50 days.

"Oregonians are so sweet to us," she said, "We've been really well taken care of here. Other than being a little wet, it's been really flawless."

While the trip is sponsored by the river advocacy group, the riders also have a GoFundMe page. The crowd-funding site proceeds will also help pay for a documentary film of their journey. You can also track their journey on their Facebook page.