Below you will find an alert recently sent out by the Oregon Rural Electric Cooperative Association to its member coops.  It is seriously incomplete and potentially misleading in a number of ways. First, on the costs of an April court order to increase spill to protect juvenile salmon and steelhead, BPA recently provided testimony in an on-going rate case admitting that the impacts of the order could range from negligible to several million dollars and cannot be determined at this time.  Moreover, BPA’s prediction of possible multi-million dollar costs for the increased spill depends on assumptions about the market price for electricity in the spring of 2018 that could well be double actual market prices then.  The most likely outcome is that the increased spill will have minimal, if any, impact on customer bills.  Those bills will be much more affected by market conditions and other forces.

Second, years of scientific research by scores of scientists working together in the region demonstrate that increased levels of spill help increase juvenile salmon survival and adult returns. Third, the best scientific information shows that the federal hydro-system is the largest source of human-caused mortality for salmon and steelhead in the Columbia Basin - killing up to 70% of the fish annually.  The 97% survival number in the alert is for survival from the just above to just below a single dam.  Juvenile salmon have to get past eight dams.  The 97% number also leaves out fish that die in the reservoirs behind each dam from predation, disease and warm water.  And it leaves out fish that die after they get past all the dams because of injuries and wear-and-tear from dam passage.  For most salmon and steelhead populations, juvenile survival through the entire hydrosystem is about 50% or less. Finally, Oregon has been a regional leader in advocating for salmon and steelhead restoration based on careful scientific analysis of the effects of the hydrosystem on these fish.  At the same time, it has been a strong advocate for a smart and efficient electric power supply.  Oregon’s consistent success in court over the years in protecting salmon reflects this focus on good science and balance.  Courts do not rule for parties that misuse science or present inaccurate and incomplete information.  But the courts have consistently ruled for Oregon.  And Oregon is not alone in its efforts.  It has the strong support of the Nez Perce Tribe and of sport and commercial fishing organizations whose livelihoods and families depend on the recovery of our wild salmon heritage. ORECA’s use of incomplete and potentially misleading information in an alert to its member coops is a disservice to all of those served by our rural electric cooperatives.  These cooperatives could play an important and constructive role in restoring Columbia basin salmon – but only of they have all the fact, not just a handpicked few. 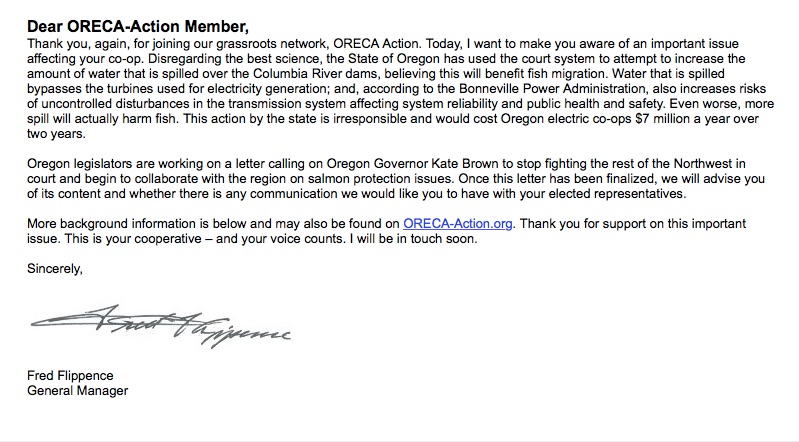 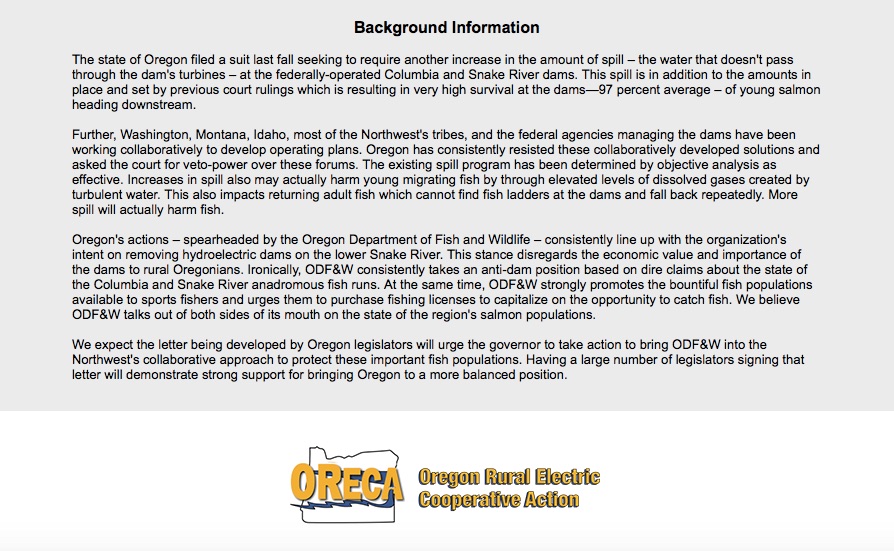