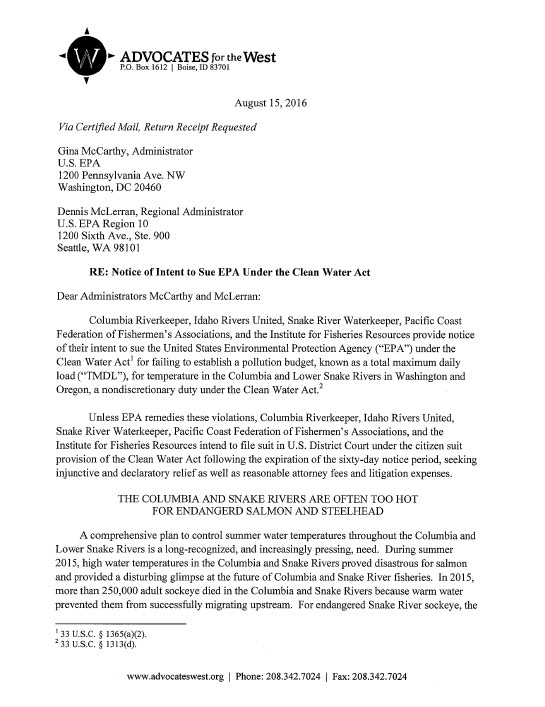 Warm water can be deadly for salmon. Just last year, 250,000 sockeye died on the Columbia because of high temperatures.

The EPA started addressing the issue more than a decade ago, but that process stalled.

“We want the EPA to take a holistic approach, to look at all the sources of temperature. But when EPA did that between 2000 and 2003, their conclusion was that it’s really the dams and flow that are controlling most of the temperature issues in the Columbia,” he said.

The lawsuit aims to force federal environmental regulators to determine “total maximum daily load” for the rivers, which would set a limit on water temperatures in order to protect salmon. The EPA and other agencies would then have to operate under those guidelines when regulating the river.

Johnson said a plan to manage river temperatures could include changes to dam operations and removal of what he called obsolete dams on the lower Snake River.

“I think this is really about whether, looking down the road 50 years from now, do we want to be teaching our children and grandchildren to catch salmon in the Columbia or explaining to them what salmon were?” Johnson said.

The EPA did not immediately provide an explanation for why the regulatory process was initially shelved.  A spokesperson said it was the agency’s policy not to comment on pending litigation.