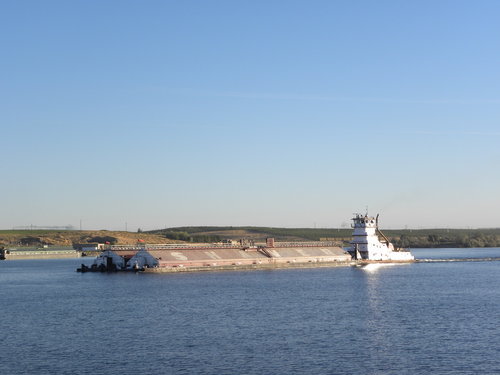 From the desk of Lin Laughy, of Fighting Goliath

As the Army Corps of Engineers blunders on with its plan to dredge the confluence of the Snake and Clearwater Rivers every 3-5 years for the next half-century, defenders of lower Snake River dams and barge transportation present the public with reruns of obsolete arguments. While many of these claims lacked validity 15 to 20 years ago, today they face more challenges than a sockeye’s run to Redfish Lake.

Freight transport on the lower Snake has declined 45% over the past 11 years, the majority of which occurred before the recession of 2008. Some regional industries have abandoned barge transport all-together. System maintenance costs have soared while our federal government goes broke. Electric cooperatives are contracting for rapidly expanding wind energy, and farmer cooperatives are investing in facilities for unit trains. The National Academy of Sciences even suggests the Army Corps may need to divest itself of parts of an unsustainable, aging empire.

Today the lower Snake River transports just 5% of the total tonnage of the Columbia-Snake River System. Based on ton-miles, the lower Snake accounts for a mere 1/10th of 1% of all freight transported on U.S. inland waterways, making it one of the most subsidized sloughs in the nation.

Below is my report on what I have learned about the current level of barge transport on the lower Snake River. This information contradicts figures recently presented by the Army Corps in its draft dredging Environmental Impact Statement.

Freight Transport on the Lower Snake River: A New Perspective

Introduction: On January 24, 2013 the US Army Corps of Engineers (USACE) held an open house and Q & A session in Lewiston Idaho regarding the Corps’ proposed Lower Snake River Programmatic Sediment Management Plan (LSRPSMP) and related Draft Environmental Impact Statement (DEIS).1 This plan calls for dredging the confluence of the Snake and Clearwater Rivers every 3-5 years for the next 50 years. Most of the questions attendees raised concerned short-term and long-term project costs, for which the Corps provided no information. Two related questions involved the future priority of funding for lower Snake River navigation given the inability of present Corps budgets to address the financial demands of an aging national inland waterway system coupled with large pending budget cuts at the federal level. Corps spokespersons did answer these questions, explaining that a major criterion for funding used by the Corps nationally is total tonnage shipped on any given waterway. The data below shed light on this topic with respect to the Columbia Snake River System (CSRS) as well as lower Snake River shipping itself. All data come from USACE data centers, the LSRPSMP Draft Environmental Impact Statement, web-based district dam and lock information, or port shipping reports.

1. The LSRPSMP DEIS notes that the 2007-2009 recession resulted in a drop in volume of barged freight on the lower Snake River. While the recession no doubt had an impact, the decline in barge shipping has been underway for at least the previous 11 years. Pulp and paper, wood products and grains historically made up about 90% of what has been barged on the Snake. Pulp and paper shipments at Lower Granite dam declined 85% from 2000 to 2005, then another 37% from 2005 to 2010, for a total 10-year decline of 90%. Grain dropped by 28% from 2000-2005, then another 17% between 2005-2010 for a total ten-year decline of 40%. Wood products declined 40% over the ten-year period. For all products passing through the Lower Granite lock, tonnage declined 45% from 2000-2010, with more than half of this decline occurring before 2006.2 Declines in freight shipments at Lower Granite closely mirror similar changes at the other 3 Snake River dams.

As a side note, the Port of Lewiston now plans to spend $3 million to extend its container dock. The current dock, which POL has certified to be in good repair, now handles less than 25% of the amount of container freight it handled in 2000.

2. The LSRPSMP DEIS claims approximately 10 million tons of cargo are transported annually on the lower Snake River. Any cost-benefit analysis of dredging at the confluence of the Snake and Clearwater Rivers and other system maintenance activities would presumably be based in part on this figure. USACE’s 10-million ton claim in the DEIS represents a gross misrepresentation of the facts.

Table 3-13 in the DEIS provides a clue how Corps personnel may have arrived at their erroneous figure. The table lists the tonnage that passed through each of the 4 dams on the lower Snake River from 1994-2009. If one adds the tonnage at each lock, the total for 2005, for example, is 10.895 million tons. For 2009 this figure is 9.132 thousand tons. These figures may be the basis for the erroneous claim in the DEIS that total annual tonnage on the lower Snake is about 10 million tons. This claim assumes none of the tonnage that passed through the locks at Little Goose also passed through Lower Granite, that none of the freight transported through Lower Monumental dam included any of the tonnage that had passed through the two upstream dams, and so on. This claim further requires that little of the tonnage shipped on the Snake ever reaches McNary and that no freight is transported on the upper Columbia to or from Kennewick, Pasco, and Richland, both equally untenable positions.

3. Applicants for government funding of projects related to river navigation on the lower Snake River frequently refer to total tonnage shipped on the Columbia/Snake River System. As noted above, the USACE reported 5.5 million tons of commercial freight passed through McNary Dam in 2010. That same year freight tonnage on the Columbia main channel and all of its tributaries, including the Snake River, totaled 55.05 million tons. Thus the upper Columbia and lower Snake contributed approximately 10% of total shipping on the CSRS. Approximately 50% of the 5.5 million tons crossing McNary came from the lower Snake River. The lower Snake thus contributes an estimated 5% of total tonnage on the CSRS.

5. The USACE also provides statistics on ton-miles of freight shipped on all inland waterways by river. Ton-miles provide a second, and more accurate, measure of a single waterway’s contribution to the whole waterway system. Total ton-miles in 2010 on all U.S. inland waterways were 263.2 billion. In 2010 the CSRS provided 2.2 billion ton-miles to the national total, or 8/10s of 1%. The lower Snake River provided .3 billion-ton miles of waterborne freight movement. On the national level, the lower Snake thus contributed an estimated 1/10th of 1% of all U.S. inland waterway freight movement when measured in ton-miles.

Recognizing the enormous extent of its infrastructure, the growing rate of deterioration of its facilities, along with the decline of agency and federal budgets, The Army Corps of Engineers recently requested the National Academy of Sciences prepare a report on possible USACE options. The resulting work, Corps of Engineers Water Resources Infrastructure: Deterioration, Investment, or Divestment?5 noted the Army Corps is in “an unsustainable situation for maintenance of existing infrastructure. This scenario entails increased frequency of infrastructure failure and negative social, economic, and public safety consequences.” Katrina, midwest flooding, extensive drought and superstorm Sandy have highlighted additional challenges facing the ACOE related to climate change.

One major alternative outlined in the NAS report calls for the divestiture or decommissioning of parts of the Corps’ infrastructure. In light of the information provided above, the maintenance of infrastructure related to barge transportation on the lower Snake River appears a likely candidate for such action.

The NAS study provides this summary with respect to inland navigation: “The inland navigation system presents an especially formidable challenge and set of difficult choices. There are stark realities and limited options…”

Those stark realities are increasingly present on the lower Snake River.