NOAA, We Have a Problem 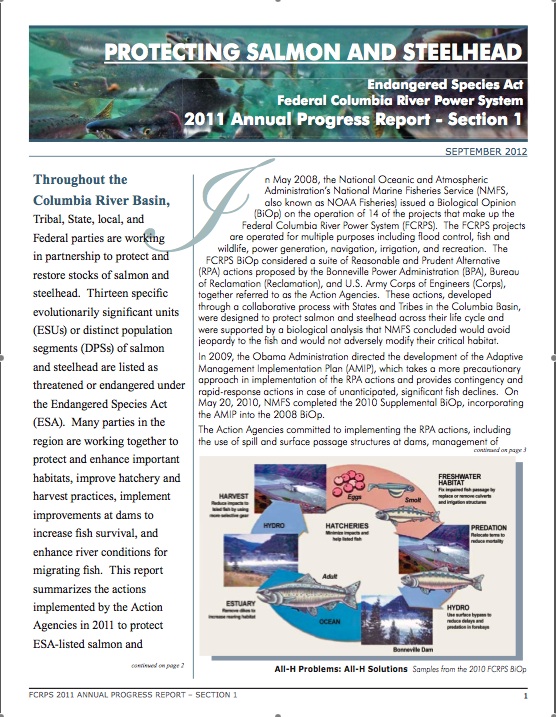 In late September, an annual progress report was issued by federal agencies responsible for implementing significant portions of the 2008/2010 salmon plan – ruled illegal in 2011 – for the Columbia and Snake Rivers. That report painted an extraordinarily rosy picture of the status of salmon restoration in the Columbia Basin. Today, the coalition of fishing and conservation groups challenging the government’s salmon plan in federal court submitted comments on the progress report that take a hard look at the agencies’ troubled arithmetic and unsubstantiated conclusions. The upshot? There’s a yawning disconnect between what federal salmon managers are doing, and what salmon actually need. The bottom line? Salmon continue to struggle and in several cases lose ground, while the federal agencies continue to claim that all is well.

Below is the statement of Pat Ford, executive director of the Save Our Wild Salmon Coalition, on the progress report comments submitted in October to a U.S. District Court in Portland, Oregon.

“These comments illustrate compellingly that there’s a huge difference between a public relations document and a science-driven policy document. Unfortunately, the federal agencies’ 2011 Annual Progress Report looks a lot more like the former. By glossing over significant concerns, using murky math, and citing actions that may not have anything to do with improving salmon survival, the agencies in charge of the Progress Report are doing Northwestern people, and all Americans who care about salmon and salmon communities, a disservice. They may also be painting themselves into a corner – legally and scientifically. The 2008/2010 salmon plan is based largely on the notion that extensive habitat projects can compensate for the massive harm done by the federal hydrosystem on the Columbia and Snake Rivers. But the Progress Report fails to show whether that plan’s specific actions are being implemented, whether the necessary survival benefits for salmon are materializing, or what measures the agencies have taken to make up for any shortfall. The Progress Report doesn’t connect the dots between the underlying salmon plan’s calculus and real-world salmon survival, a fundamental flaw that reveals how very shaky the plan’s foundations are; indeed, this is what a house of cards looks like. Meanwhile, salmon and salmon-based communities face an even bigger problem: declining salmon productivity, and no federal blueprint to fix that.

“Thankfully, there is still both time and opportunity to change direction in the Columbia Basin. Federal salmon managers have just over one year to produce a new lawful Biological Opinion that fully addresses the significant harm to salmon caused by the federal hydrosystem – and that complies with a federal court’s order to go beyond mere tweaks. Further, NOAA Fisheries and the Obama Administration have a great opportunity – today – to bring together affected stakeholders to begin work to craft a durable plan that restores salmon, boosts clean energy and transportation, creates jobs, and invests in communities. The time for glossy PR materials is past; it’s time we start real conversations about actual solutions in the Columbia Basin.”