NewsDeeply: Why Hydroelectric Utilities Are Endangered by Soaring Solar and Wind 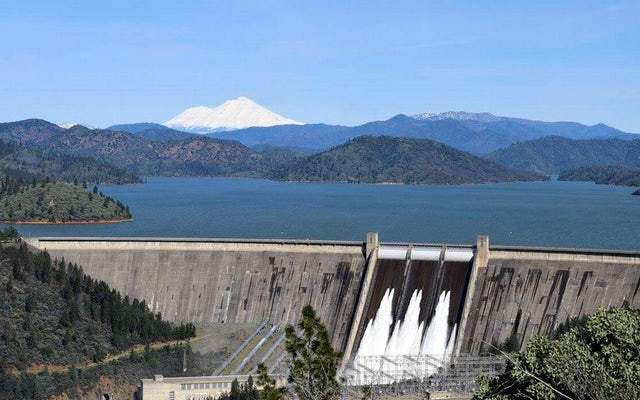 A California phenomenon called the ‘duck curve’ successfully predicted an electricity surplus as solar and wind energy flooded the grid. This may be bad news for Western hydroelectric dams that are unable to adapt.

The success of solar and wind energy in California is having a surprising side effect: It may be undercutting revenue for hydroelectric dams, the longtime stalwart of “green” energy in the West.

Four years ago, officials at the California Independent System Operator (ISO), which manages electricity demand across the state, identified a phenomenon called the “duck curve.” The curve – shaped like the profile of a duck – predicted that within a few years growing wind and solar generation would create a surplus of electricity during midday.

That surplus, in turn, would create a condition in which traditional power producers, including hydro, might have to be idled.

The prediction not only proved to be true, but the power imbalance has grown even faster than expected. As a result, there were long periods this year in which market pricing for electricity in California actually turned negative. That means producers had to pay the market to take their energy.

The situation is good for energy consumers, who benefit from lower prices. It’s also good for the planet, because it means solar and wind energy have at last become major contributors to the grid.

The “duck curve,” shown here, illustrates how the rise of solar and wind energy create a growing surplus of power during midday, a phenomenon that is putting economic strain on traditional energy sources including hydropower. (Image Courtesy California ISO)

But it’s a different story for the hydropower industry, especially during springtime. That’s when reservoirs are full with storm runoff and dam operators must release water as snowmelt builds. Normally, they would do so through hydroelectric turbines to generate electricity. But negative pricing could force some to release water by other means, without producing revenue from electricity generation.

The hydro industry may eventually find that some generating units no longer pencil out. And the effects aren’t limited to California: The duck curve influences utilities all over the West, which contribute energy to the grid, in part, to help satisfy California’s huge energy demand. 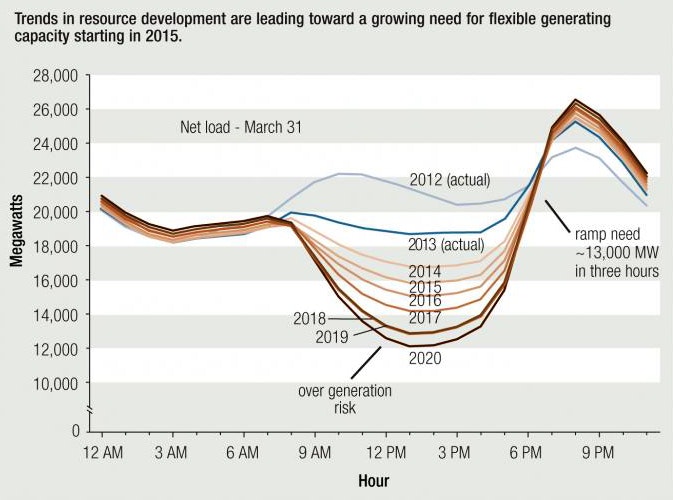 “If there is a lack of demand during the daylight hours, then there is going to be a direct influence on the ability to sell hydropower, which is in a must-run scenario during springtime,” said Gregg Carrington, managing director of energy resources at the Chelan County Public Utility District, a hydropower producer in Washington State. “If energy costs are lower than the cost of production, then it’s going to cause the business model they were developed for to be in question.”

Carrington was on a panel that discussed the issue at this year’s conference of the Northwest Hydroelectric Association. In a PowerPoint presentation, he illustrated how electricity pricing has declined by a dramatic 55 percent over the past six years in the mid-Columbia energy market in central Washington, a region dominated by hydropower.

In an earlier report, the Northwest Power and Conservation Council essentially blamed the duck curve, citing growth of wind and solar power and government incentives to reduce greenhouse gas emissions. It warned the results could “discourage future power generation development in the region.”

Carrington went a little further, cautioning that energy oversupply could force utilities to mothball some generating units, whether they be coal, natural gas or hydro. Coal plants are the natural first victims, because they are the most polluting. Already, three coal-fired plants in the Northwest have announced plans to close in coming years.

“In the end, what’s going to happen is you’re going to have stranded assets,” Carrington said. “People will turn off baseload assets, and in the long run it could affect [grid] reliability.”

The first victim of this trend in the hydroelectric sector may be the Pacific Gas & Electric (PG&E) Company’s DeSabla-Centerville facility, a small hydroelectric system on Butte Creek in California. In February, the utility told the Federal Energy Regulatory Commission (FERC) it planned to withdraw its application for a new operating license for the project. FERC declined, instead directing PG&E to find another entity to buy the hydro system, a process that is still under way.

PG&E spokesman Paul Moreno said he could not blame the duck curve for the utility’s decision to part with DeSabla-Centerville. But he did cite weak energy prices.

The oversupply of energy exemplified by the duck curve has led to negative pricing in Western energy markets – a condition in which power producers may have to pay utilities to take their energy. This graph shows an example from April 9, 2017, in which energy prices turned negative during the middle of the day. (Image Courtesy California ISO)

“Markets have changed,” he said. “The cost to operate it and declining prices for power mean it’s simply no longer good value for our electric customers.”

The repercussions of hydropower closures can be complicated. In most cases, decommissioning and removing hydropower dams is good for rivers, reviving natural river flows and restoring upstream access to spawning fish. 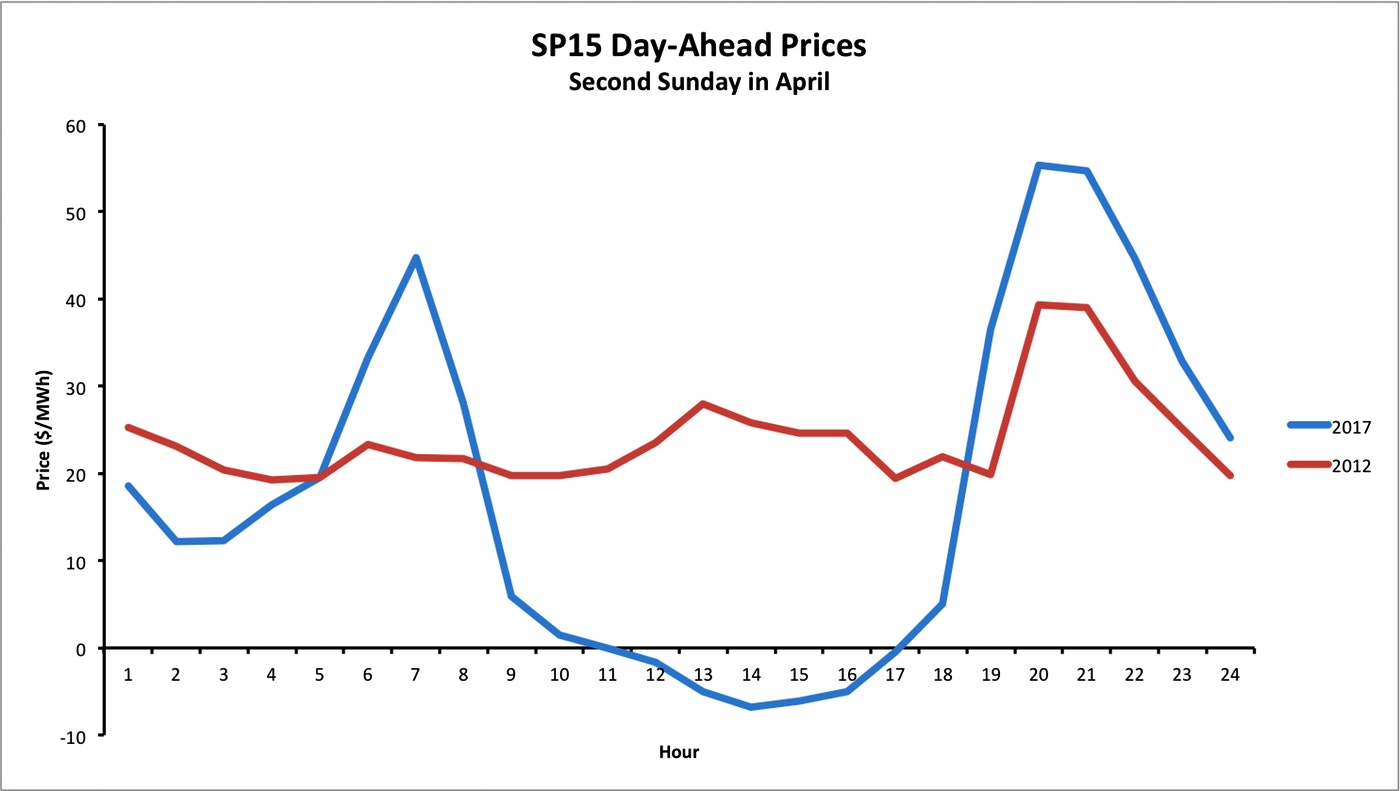 But that may not be the case if PG&E’s DeSabla-Centerville project is shut down. The system, more than a century old, diverts cold high-elevation water from the West Branch of the Feather River into a canal that feeds into Butte Creek. There, the cold water has become essential to sustaining the only wild-spawning population of spring-run Chinook salmon that still survives in California.

So if DeSabla-Centerville was shut down, or if its flows were significantly altered by a new owner, it could threaten this rare strain of native salmon.

But they have started looking closely at other hydroelectric dams that may be vulnerable to the new economics.

“In the middle of the day, if you subtract out wind and solar, the generation need for other resources goes to near zero,” said Steindorf, also chairman of the Hydro Reform Coalition, a collection of environmental groups. “That’s what we want to see. We need to see solar replacing other energy sources.”

Steindorf has been working with an analyst at Lawrence Berkeley Laboratory for more than a year to identify Western hydro projects that might soon be on the chopping block due to economic pressures. This, he said, could create new opportunities to reopen rivers for spawning fish and for recreation.

Steindorf said he isn’t prepared yet to identify any vulnerable hydro systems. But he said smaller systems and those that are “run of the river” – meaning they don’t have a lot of water storage – could be the most vulnerable.

“We believe there’s some opportunity here for river restoration, as well as to have the hydropower fleet be more efficient in meeting the changes that are required as part of more renewable energy coming online,” he said. “If we’re going to do anything about climate change, these are the kinds of problems that we need to solve.”

Clyde Loutan, a principal for renewable energy integration at the California ISO, is considered the “father” of the duck curve. He first identified the oversupply problem and developed the forecasts that led to the duck curve. Today, he and others at the ISO are working on a number of solutions to address the problem.

These include energy storage, such as massive batteries to store power at homes and businesses when there’s a surplus on the grid; proliferation of electric vehicles, which are essentially rolling batteries; and even encouraging consumers to use more power during midday when there’s an oversupply.

Hydropower is also in the mix of solutions, Loutan said, because it can generally respond instantly to changing energy demand simply by releasing water through turbines.

The opposite challenge posed by the duck curve is the upright neck of the duck. It represents a steep ramp-up in power demand at dusk – a time when solar energy production tapers off but energy demand spikes as people return home from work.

Hydropower can respond to these ramps faster than almost any other energy producer. But not all hydro plants have this capability.

Loutan noted that many hydroelectric dams are required to meet strict cold-water flow requirements at certain times of the day to protect endangered fish. Others don’t have adequate storage capacity to meet the new energy grid’s ramping demands.

Those that can ramp up swiftly, however, will remain in high demand. What’s needed, Loutan said, is pricing incentives that encourage these hydropower plants to run full-bore during the steep new ramping periods.

“In the spring months, when the snow starts melting, there’s only so much you can do because we have a lot of run-of-the-river hydro. Either you harvest that energy or you lose it,” Loutan said. “The bigger hydros, eventually we’re going to want them to operate a little differently. They’re going to have to align with the challenges we see.”

Drought presents another challenge, Loutan said. Even big reservoirs can’t help meet energy demand if they have no water to move through their turbines.

Another threat is climate change. Some predictions show that in the decades to come, more of California’s mountain precipitation will fall as rain and less as snow. This means more runoff in spring, when hydroelectric dams are already less able to respond to the duck curve; and less runoff in summer, when energy demand is highest.

“There is a pretty big shift going on out there in power generation,” Steindorf said. “These utilities are going to have to look hard at how much they want to spend maintaining a hydroelectric project they know is really not economically viable.”