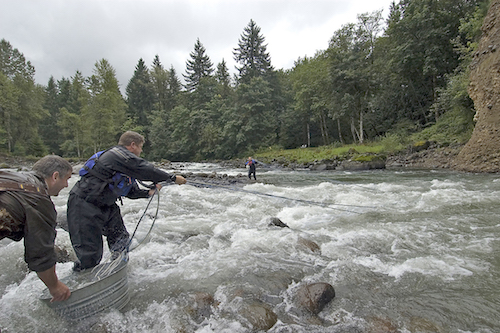 CLACKAMAS, Ore. – Ten years ago a new era of salmon and steelhead recovery quite literally started out with a bang when Marmot Dam was removed from the Sandy River.

More than a ton of high-grade explosives were detonated, taking off the face of the 47-foot high concrete dam.

At the time, it was the largest dam breach ever attempted. Portland General Electric, owner of the dam, figured it would be more cost-effective to remove the structure than upgrade it to meet new federal relicensing standards.

In July 2007, in a highly publicized event, PGE blew the concrete face off its dam on the Sandy River. For the next three months, large backhoes with pneumatic hammers pulverized, drilled, pulled apart and hauled off the remaining pieces of the dam. On Oct. 19, a rainstorm swept away the backfill that had accumulated behind the dam, making the Sandy totally free-flowing again, from its headwaters on Mt. Hood to its confluence with the Columbia River in Troutdale 56 miles away.

Biologists, conservationists, anglers, and others hailed the removal of Marmot Dam as a victory for imperiled native runs of Chinook and coho salmon and steelhead. The hope was that fish would benefit from better flows, better water quality and unrestricted access to prime spawning grounds in the uppermost reaches of the river.

So has 10 years of a free-flowing Sandy River been good for fish?

The answer is an unqualified ‘yes’, according to Todd Alsbury, ODFW district fish biologist for the Sandy, and one of the partners in the removal of Marmot Dam.

Now, for the past three years, when other runs of salmon and steelhead around the region have been down, the Sandy has been seeing increasingly strong returns; in some cases, double what they were a decade ago before Marmot Dam was removed.

“While not solely due to dam removal, returns of wild spring Chinook, winter steelhead, and coho have increased significantly as compared to their abundance before the dam was removed,” said Alsbury, who noted that in the 10 years since Marmot Dam was removed ODFW has observed the largest returns for all three species in the 40 years.

To really gauge how successful removal has been, though, it helps to look at how the fish were doing prior to removal of the dam.

Wild spring Chinook were nearly extirpated in the 1950s and ’60s by dam operations, habitat losses, and other human impacts. During this period, fishery managers tried to rebuild the population with hatchery Chinook, which were intercepted in a trap at Marmot Dam and trucked to Sandy Fish Hatchery, where the next generation of fish was spawned and reared.

However, fisheries management changed dramatically in 1998 when the fish were listed as threatened under the Endangered Species Act. This triggered discussions about ways to recover the fish, including by taking out Marmot Dam and reducing releases of hatchery fish so there would be fewer of them to compete with the ESA-listed wild fish. These discussions also led to one of the first integrated brood programs whereby wild spring Chinook were reared at the hatchery, and later cross-bred with hatchery Chinook to create a fish closely resembling the native fish, instead of looking outside the basin for replacement stock with different genetics.

When Marmot Dam was removed, ODFW biologists lost a fish trap that gave them the ability to catch and separate wild fish. The fish needed to be separated so the wild ones could go on upstream to spawn while the hatchery fish were captured and taken to the hatchery to spawn. For the first two years after dam removal, ODFW staff netted brood stock out of the river using large seine nets pulled by swimmers in full wetsuits. Later on, biologists installed weirs, or portable traps, in the river for this purpose.

To continue providing a recreational fishery, Alsbury and his staff developed an acclimation site to rear and release juvenile fish at a location that is suitable for returning adult fish. They now collect adult fish using temporary weirs near the release location to capture returning adults. Afterwards, the weir can be removed from the river.

“Our goal is to first protect native runs of native salmon and steelhead while at the same time providing a robust recreational fishery,” said Alsbury. “Thanks to a lot of hard work on the part of many dedicated individuals and a lot of collaboration we are starting to see some impressive results.”

“Habitat is the key,” Alsbury added, noting that the Sandy is one of the few rivers where fish habitat is now being added faster than it is being degraded or lost, and that salmon are now showing up to spawn in habitat that didn’t exist before.