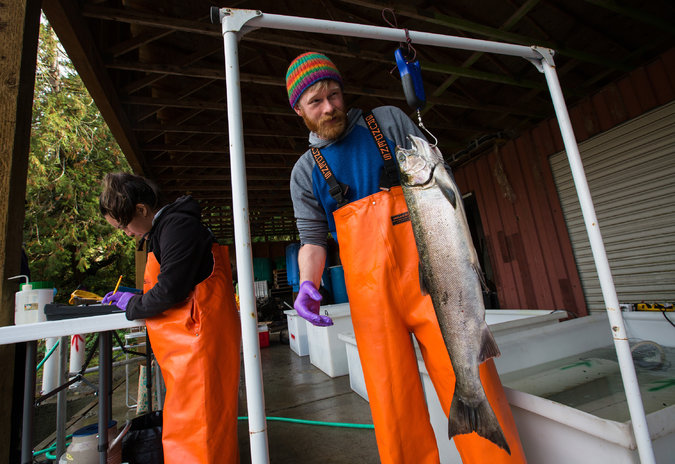 PORTLAND, Ore. — When Lewis and Clark first encountered the Columbia River in 1805, they wrote about nearby streams so thick with salmon that you could all but walk across on their backs.

Last summer, those streams looked very different. As a torrid heat wave settled over the Pacific Northwest, the salmon heading up the Columbia River from the ocean in their ancient reproduction ritual started dying en masse, cooked in place by freakishly hot water that killed them or made them vulnerable to predators. Sockeye died by the hundreds of thousands.

“It was a peek at the future,” said Jim Martin, a former chief of fisheries for Oregon, who now works on conservation issues for a fishing tackle company, Pure Fishing. “This is exactly what is predicted by climate-change models.”

Other salmon experts, though, said the future was not that clear. Even as the sockeye here were dying, they said, pink salmon were exploding in number, especially in the Puget Sound area around Seattle. Alaska, which actually supplies most of the wild-caught salmon eaten in Portland, Seattle and other coastal cities that have their identities tied to fish, had its own good-news story this year, with a near-record harvest.

The message — with huge implications for a region where salmon have been worshiped, eaten and fought over for millenniums — is that neither the fate of the fish nor the trajectory of climate change will be linear or neat. Threats to salmon abound and concern runs deep on all sides, but the pattern of 2015 suggests more than ever that location matters, with salmon doing better in some waterways than in others, and certain types of salmon thriving the most. Human intervention may help, wildlife experts say, but they are still not entirely sure what measures will work best, particularly as microclimate conditions differ so greatly.

“Hedge your bets, spread your bets,” said William Stelle, the West Coast regional administrator at the National Oceanic and Atmospheric Administration’s fisheries department, summing up the new philosophy. If it looks as if the water in certain parts of the salmon’s range is going to be too hot for them to withstand, Mr. Stelle said, then the new approach is to find or restore places with cooler water. “You have to bring it down to the local conditions — what can you do in that place?”

The Environmental Protection Agency and the State of Oregon recently announced a three-year plan to map such “cold water refugia” in the Columbia and Willamette River systems. The United States Forest Service has developed a database of stream temperatures in the Northwest with plans to roll out similar models for other regions around the country looking to map their coolest streams.

The new thinking also points the spotlight on Portland and other places that have pioneered or advanced the idea, and where fishery managers say that cold-water refuges are showing signs of early — if tentative — success. Last fall, for example, scientists documented salmon spawning in Crystal Springs Creek, five miles from the downtown high-rises of Portland, Oregon’s largest city, for the first time in a half-century.

The 2.7-mile-long creek starts from a spring on the campus of Reed College. School officials worked with the city for more than decade to tear out culverts and other blockades that had kept the fish from the watershed, known as Reed Canyon.

“It got suddenly real,” said Zac Perry, the Reed Canyon restoration manager at the college, as he pointed to the place near a bridge where the first of a dozen or so coho salmon pairs were spotted.

A couple dozen fish are by no means a major salmon recovery — and at a cost of about $15 million, some people might question the cost-benefit ratio as
well. But in salmon micromanagement circles, fishery experts said, small successes can resonate: More federally protected fish species transit through Portland, or spend a portion of their lives there, than through any other major metropolitan area in the nation, according to the Center for Biological Diversity, a conservation group. And because Crystal Springs Creek connects through another stream with the Willamette River, its cold- water refuge can make an important difference as part of a 300-mile salmon habitat.

Even though much of the salmon in American supermarkets and restaurants is farmed or caught elsewhere, the industry is still vital to the Pacific Northwest economy, injecting billions of dollars through sport fishing, tourism and the Alaskan fishing fleet, much of which is based in Washington and Oregon.

“What happens in Portland matters for salmon,” said Noah Greenwald, the endangered-species director at the Center for Biological Diversity. “If there are places the salmon can hold out, then identifying those areas and making sure they’re protected is certainly going to be important.”

The new approach to salmon conservation may also influence land-use decisions. Once cold-water hiding places are mapped, experts say, legal obligations could swing into place to protect those places under the federal Endangered Species Act, which lists four of the six Pacific species as threatened or endangered.

Critics of the cold-water refuge effort said that although it might help in the short term, it sidestepped bigger and vastly more expensive problems. A reliance on hatcheries, which began early in the 20th century after salmon were almost fished to extinction, has made the fish more genetically uniform and less adaptable to a changing climate, they said. Dams on the Columbia and Snake Rivers raised water temperatures by making the rivers slacker and slower moving, long before climate change emerged as an important factor.

“We’re doing a lot of the easy things, and they’re great, but they’re not enough,” said Guido Rahr, the president and chief executive of the Wild Salmon Center, a Portland-based conservation group. As the climate continues to change, Mr. Rahr said, salmon will need every bit of their ancient, wild genetic diversity because evolution will select the traits best suited to survival.

What traits might be needed, exactly, is anybody’s guess. The coho run that came in Portland last year with those pioneering pairs on Crystal Springs, for example, did not materialize this fall, with only a few return sightings. No one knows exactly why, though coho numbers did plummet last summer in the Pacific.

“What scares me is that we do not have control over what happens in the ocean,” said Kaitlin Lovell, the manager of the Science, Fish and Wildlife Division for the City of Portland. “Projects like Crystal Springs buy you time to make the bigger decisions you have to make.”

And those decisions do not get easier. “In an urban environment, can we do enough to overcome or stay ahead of climate change?” Ms. Lovell said on the stream’s bank on a recent afternoon. “How far can you go?”