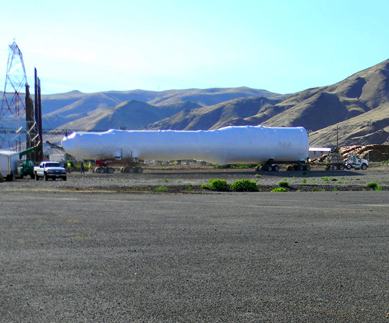 U.S. District Judge B. Lynn Winmill rejected claims by the Forest Service that it had to first complete a study of megaload effects before it could stop shipping company Omega Morgan from hauling a giant General Electric evaporator through the forest on its way to oil fields in Alberta, Canada. He said the agency was bound by several federal acts and its own forest plan to study the effects of the megaloads and consult with the Nez Perce Tribe before allowing them to pass through the forest and its Middle Fork of the Clearwater/Lochsa Wild and Scenic River Corridor.

"The consultation must be conducted after the corridor study and before any further Omega Morgan megaloads pass through," he wrote in his ruling.
The agency has already begun to study the intrinsic and spiritual values of the corridor, not just for the tribe but for other citizens as well. It hopes to finish that review shortly, perhaps by the end of the month, according to Lochsa District Ranger Craig Trulock. Brooklyn Baptiste, a member of the Nez Perce Tribal Executive Committee, said the consultation that will follow the study will take some time.

"We look forward to them coming to the table and finding the best pathway forward consistent with our view that we don't want it to become an industrial corridor," he said. "When the tribe does consult with federal agencies on any project or any rule it always takes some time. You want to make sure it's solid. It is something we would want ourselves and it's not going to be an overnight process."

Winmill sympathized with arguments by Resources Conservation Company International, a GE subsidiary that designed the evaporators, that it faces losing as much as $5 million in delay penalties if it can't immediately use the route to deliver the evaporators as contracted. But he said that is something the company was well aware of before it positioned two megaloads at the Port of Wilma for shipment east along the narrow and twisting highway. He pointed out the company researched the route and was notified by the plaintiffs and the Forest Service about procedural problems with it.
"RCCI knowingly put its loads into a position where the company would incur $5 million in losses if it must wait for the Forest Service review," Winmill wrote in his ruling. "Given these circumstances, the court cannot find that the balance of equities tips in the defendants' favor. In fact, it tips the other direction to the clear command of the tribe's treaty rights, (the National Forest Management Act) and the Wild and Scenic Rivers Act."

The company released a statement Friday saying it was disappointed with the ruling and considering its options.

"While we must review our options, we have addressed the safety, environmental and aesthetic considerations in choosing this route for shipment, and we have met the legal requirements for transport by obtaining permits for previous shipments from the Idaho Transportation Department," said William Heins, the company's CEO.

Kevin Lewis of Idaho Rivers United said the ruling gives the agency time to complete a thorough review and it should send a signal to others who want to transport megaloads on the highway.

"I think what is going to happen, is future megaload shippers are going to understand Highway 12 is fraught with peril and the most important thing to them is certainty and there is no certainty with Highway 12," Lewis said.
Trulock said he fielded calls from other shippers following the ruling seeking a status of the route. Omega Morgan had planned to ship an additional seven GE megaloads via Highway 12 and Contractors Cargo Company of Compton, Calif., was planning to use the route to move three refinery vessels from the Port of Lewiston to Great Falls, Mont.

Last month, hundreds of tribal members and environmentalists protested when Omega Morgan hauled an evaporator from the Port of Wilma to Canada via the highway against the wishes of the Nez Perce-Clearwater National Forest. The tribe and Idaho Rivers United filed their lawsuit in the midst of the protests.