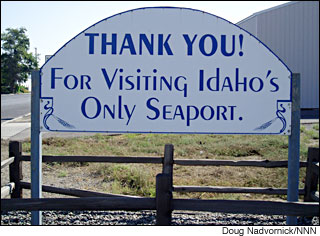 By ELAINE WILLIAMS of the Tribune

Construction crews are working to complete the new warehouse at Clearwater Paper that will hold paper board rolls for shipment.

A new warehouse at Clearwater Paper is expected to make the manufacturer's operations more efficient as it creates challenges for the already-hurting Port of Lewiston.

Clearwater Paper is building a 40,000-square-foot, 28-foot-tall, $4.5 million addition to the storage and loading facility for paperboard and pulp at its Lewiston site.

The project is expected to be completed by the end of December and save hundreds of thousands of dollars each year in reduced handling for paperboard rolls. Those innovations, however, will come at a cost to the Port of Lewiston.

Right now, Clearwater Paper's Lewiston site only has about 15,000 square feet of storage space for giant rolls of paperboard, which range from 60 to 72 inches in diameter. The paperboard is sold to customers who turn it into cups, food containers and packaging for items like cosmetics.

To compensate, Clearwater Paper hauls most rolls to Terminal II, a 150,000-square-foot warehouse 11/2 miles away at the port, then back to the plant for additional processing before shipping, said the paper mill's spokesman, Matt Van Vleet.

Clearwater Paper is the largest customer of Terminal II, the biggest building the port owns. It is operated by a private business, Inland 465, whose representatives did not respond to requests for comment for this story.

Terminal II is budgeted to generate about $250,000 for the port for this fiscal year, with overall revenue anticipated to be close to $2 million.

The potential for less activity at the warehouse comes at a time when container shipping - another significant source of money for the port - has dipped to historically low levels, in part because Clearwater Paper ships less.

Port commission President Mary Hasenoehrl said the port has met with officials from Clearwater Paper, as well as Inland 465.

"We know we're going to have to try and make up that difference," she said. "We don't know that we're going to lose (all the Clearwater Paper business). I'm sure they'll be a deficit of some sort."

Among the possibilities is seeing if existing customers - such as those who store snowmobiles and minerals at the warehouse - might need additional space.

"We're hoping (the effect) is minimal, but we don't really have a sense of that and we won't until the (mill's warehouse) is fully operational," Hasenoehrl said.

The new Clearwater Paper facility reflects not just a reduced need for off-site storage, but the factory's increased reliance on forms of transportation other than the river.

Paperboard and pulp are the only products Clearwater Paper moves on the river. About 60 percent goes by truck and 35 to 40 percent moves by rail. The remainder, if any, is barged.

Clearwater Paper is doubling the number of loading bays for trucks to 12 and adding three places to fill rail cars, bringing the total to 13.

Even though the mill has a reduced need for barging and off-site storage, the wood products company still supports the port, said David B. Jordan, vice president of distribution.

"We use the river to barge paperboard as much as we can," Jordan said.
"There's a real strategic advantage to Clearwater Paper in having the port."

But since almost all of Clearwater Paper's paperboard is being hauled by rail or truck, the company wants to be equipped so those operations run as smoothly as possible, something that has advantages for the entire community, Jordan said.

U.S. Highway 12 will be less congested as it crosses the Clearwater River because fewer trucks will be using it and less fossil fuel will be burned.

"It will allow us to keep the damage down because we're not going to be handling the rolls as much," Jordan said.

It also better positions Clearwater Paper to cope with a labor shortage in the trucking industry, Jordan said. It will be faster for the company to prepare a shipment when a driver is in town with an empty trailer, possibly just after delivering goods to another manufacturer or retailer.

Recruiting new drivers is difficult because young people would rather work in more lucrative, less-physically-taxing fields such as the high-tech sector, Jordan said.

All of the improvements will control transportation costs, something that will help give Clearwater Paper a competitive edge, Jordan said. "It's another tool to service customers better."