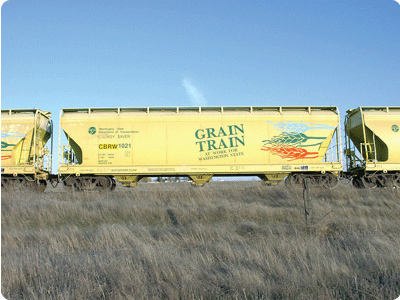 Construction crews set up forms for the first of two buildings that are going up in the Port of Wilma west of Clarkston at the new 12-acre site of CHS Primeland. This building will be home to a small office and crop protection area.

CHS Primeland won't need as many trucks to get fertilizer to farmers once it finishes a new storage center and retail outlet at the Port of Wilma.

The facility is under construction just west of Clarkston and is scheduled to be finished by spring 2016. Once the several-million-dollar project is complete, it will be the largest of its kind for CHS in the Pacific Northwest, said Lewiston Seed and Agronomy Division Manager Ken Mingo.

CHS Primeland operates in eastern Washington and north central Idaho and is a part of CHS, a Minneapolis-based cooperative owned by farmers, ranchers and co-ops across the country. Mingo said CHS provided the capital for the expansion.

Right now, Mingo said CHS Primeland has limited capabilities to handle fertilizer transported by train and no way to accept liquid fertilizer that's barged. Roughly 75 percent to 80 percent of the inventory will arrive by rail.

"It just gives us another option to secure product," he said.

Fewer road miles for fertilizer will reduce transportation costs and should result in savings for farmers, Mingo said.

A 55,000-square-foot building will have capacity to store 24,000 tons of dry fertilizer. Three large tanks and 10 smaller tanks, plus two existing Tidewater tanks, will have a total capacity of 2 million gallons for liquid fertilizer.

The storage center will supply a service territory that has expanded in recent years with mergers such as one with Latah County Grain Growers. The firm now has eight retail agronomy locations from Grangeville to Mead, Wash.

It will also provide a ninth retail agronomy location for Lewiston-Clarkston Valley-area farmers that are now served by CHS Primeland in Grangeville.

"We can get more done in a day," Mingo said. "We're not driving so far. It serves our customers better."

CHS Primeland expects to add four employees to its existing staff of about 150 to work at the Port of Wilma, where the center will be able to create custom blends in bulk or in smaller batches for individual customers using software.

"This whole facility will be highly automated and state of the art," Mingo said.