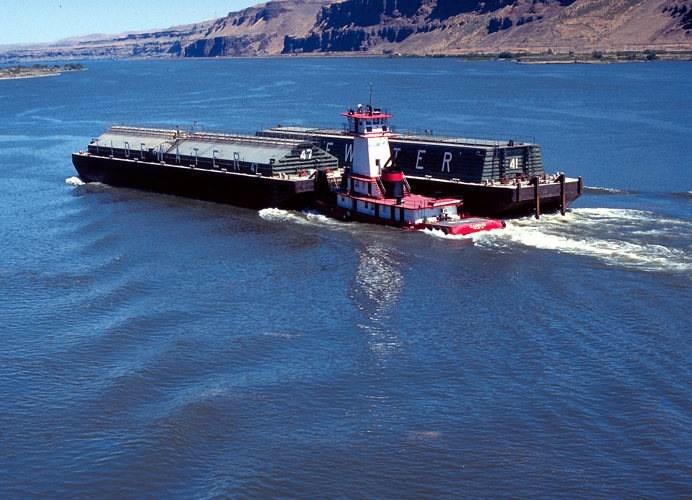 A pair of studies funded by two Northwest environmental groups conclude the four lower Snake River dams are needed neither to keep the region's commerce moving nor its lights on.

Carried out by Anthony M. Jones of the Boise economic consulting firm Rocky Mountain Econometrics, the first study targets navigation on the lower Snake River and notes commerce made possible by the dams has been in steady decline and at best can only hope to stabilize at a fraction of former levels. Jones writes that container traffic on the lower Snake River has been eliminated and petroleum products have nearly disappeared. With new competition from rail, he said wood products and wheat and barley are down from historic levels, but may stabilize at current levels.

"The long-term high forecast for tonnage on the lower Snake River looks to be about 2.7 million tons," he wrote, and noted the low forecast is similar.

The study was released before the Port of Lewiston announced this week that a small amount of container traffic would return to the river.

At the high point of river transportation, when more goods were shipped by barge and the price difference between rail and river shipping was greater, barging produced a benefit of about $20 million per year. He said based on current shipping prices and river transportation tonnage, those who choose to move products by barge instead of rail save about 2.4 cents per ton, or about $7.6 million annually.

Jones calculated it costs the U.S. Army Corps of Engineers about $227 million a year to maintain the dams, and attributed about $17.8 million of that to the transportation system. When the $7.6 million barging benefit is divided by the operation costs, it works out to about a 43-cent benefit for every dollar spent.

However, that calculation doesn't include the massive amount of money spent annually, $782.3 million last year, to mitigate the harmful effects dams on the Snake and Columbia rivers have on salmon and steelhead. Jones attributed 25 percent of those mitigation costs to Snake River dams, which lowered the barging benefit to 21 cents for every dollar spent.

"Container traffic is gone, petroleum is gone, wheat and barley is down by a third from decades ago," he said. "The products being shipped have either stopped outright or are in a state of decline, and the operation and mitigation costs are going up at something like 5 percent a year. That is not a pretty picture in the business world."

Put another way, he said "the cost is so high, if you shut the dams down today you would save enough money to pick up the (rail) shipping costs of everything that moves on the lower Snake River and still have money in the bank."

By his calculations, the corps could save about $10 million a year by removing the dams and paying farmers the $7.6 million they now save a year by using the river for transportation.

Jones also found that the small percentage of the Northwest's hydroelectric power produced at the dams could be easily replaced. In fact, he said the Northwest has a surplus of power today. Removing the dams would still leave the region with a healthy surplus of energy, he said. He even calculated that residential power bills would decline by 6 cents a month if the ongoing maintenance costs to turbines at the dams were eliminated by breaching.

The navigation study was funded by Idaho Rivers United of Boise, and the power portion was commissioned by Save Our Wild Salmon at Seattle. Both groups advocated for breaching the dams. Kevin Lewis, conservation director for Idaho Rivers United, said dam supporters and the corps have been saying for decades that the dams provide a benefit to the region.

"These reports and others clearly show that such assertions are less than honest," he said. "And while we've been enduring the government's rhetoric, endangered wild salmon, Puget Sound orcas, and Northwest fishing communities have suffered as collateral damage."

Lt. Col. Timothy Vail, commander of the corps' Walla Walla District, recently said the dams "provide a great return on investment" to the region and the country. Not surprisingly, the groups and the corps use different numbers to arrive at their conclusions. According to Vail, the dams cost only $62 million to operate and maintain and provide $200 million a year of carbon-free electricity.

"As we face future challenges with optimizing fish recovery, ensuring the efficient flow of goods through the Snake River navigation channel and providing low-cost energy, I am confident that, with the support of the American people, we will continue to ensure the Snake River dams provide outstanding value to the nation," Vail said in an October news release.

For more information on these two reports, click here to view the SOS/IRU press release.