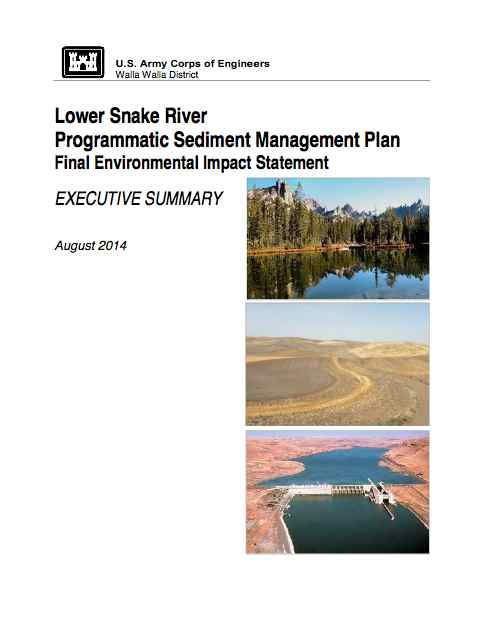 The U.S. Army Corps of Engineers released its final plan and environmental impact statement Thursday to manage sediment in the lower Snake and Clearwater rivers.

The plan, which is 3,905 pages long and cost $16 million to prepare, calls for dredging the navigation channel of the lower Snake River at the confluence of the Clearwater River as early as between Dec. 15 and Feb. 28 this winter. It also identifies a number of other tools the agency can use to manage sediment accumulation over the next 20 years. The agency has been working on the plan since 2005.

Included in the tools that can be used to manage sediment is raising the levees at Lewiston, a move that has been unpopular with residents of the town that bills itself as a seaport. However, corps spokesman Bruce Henrickson said the only short-term action being proposed at this time is dredging at the confluence of the lower Snake and Clearwater rivers and at the downstream approach to the navigation locks at Ice Harbor Dam.

"We are not proposing to raise the levees at this time or for the foreseeable future," Henrickson said. "That tool remains in the toolbox, as well as others."

Both rivers hit slackwater at or near Lewiston, causing fine silts and sand carried by the current to fall out and settle on the bottom of the channel. Over time, the sediment piles up and clogs the navigation channel, making it more difficult and less efficient for barges to transport goods to market. It also impedes the river's ability to contain flows during times of high water and flooding.

In the past, the corps has relied on dredging to maintain the channel at a depth of 14 feet and width of 250 feet, as authorized by Congress. But environmental groups have challenged dredging as part of their effort to push for removal of the four lower Snake River dams to help threatened and endangered salmon and steelhead.

Increasingly, those groups have criticized the cost of maintaining the dams and the navigation channel. They have hammered the corps for not including a cost-benefit analysis in its draft environmental review released last year.

The final review does not include a detailed section on economics, but Sandy Shelin, environmental coordinator for the corps' Walla Walla District, said the documents include enough economics to justify the work. The corps estimates about 3 million tons of commodities are shipped on the river each year and moving them by barge instead of truck or rail saves about $8.45 per ton or about $25 million per year.

The agency also projects that it costs about $1 million to $5 million a year to maintain the shipping channel.

"Therefore based on the estimated transportation savings, ongoing channel maintenance on the lower Snake River is warranted from the navigation perspective," according to the agency's plan.

"We didn't get into huge detail, we just said yes it's still worth us going out there and doing maintenance of the channel. It's still being used," Shelin said.

Those opposed to dredging insist the cost to maintain the navigation channel and the dams far outweighs any economic benefits they provide. Critics like Linwood Laughy of Kooskia say freight volumes on the river have declined significantly and other shipping methods like rail are growing. His number crunching comes up with an annual economic benefit from maintaining the channel of $500,000 to $1 million and he has said continuing to spend money on the system amounts to a subsidy.

Other long-term tools the agency could use to manage sediment include drawing down the reservoir behind Lower Granite Dam to flush sediment, moving ports to deeper areas of the reservoir, and using dikes and weirs to direct where sediment settles.

Before any of those measures are taken, Shelin said the agency would conduct site-specific environmental and economic analysis.

Henrickson said the ports of Lewiston and Clarkston will be able to use the corps' environmental documentation to dredge their berthing areas. But he said each port must get its own dredging permit.

The document is available for review at the link below. A 30-day public comment period will begin next Friday.