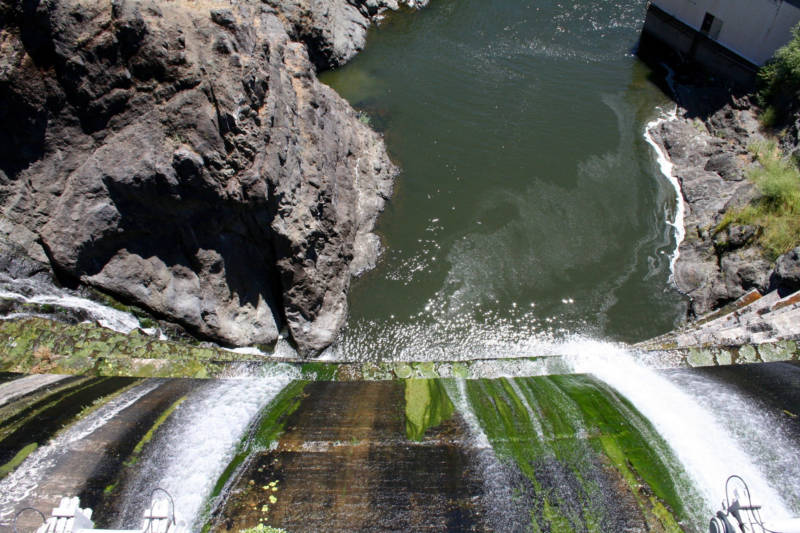 Our metal powerboat is puttering near a bend low in the Klamath River. Morning fog pours off the hills against a flat gray sky, but we can see a fight up around a bird’s nest.

“The eagles are perched up here in the tree,” says Mike Belchik, a fisheries biologist for the Yurok tribe, whose lands extend 44 miles from the Pacific Coast inland. “The osprey is dive-bombing them.”

Belchik claps loudly to break up the birds. “They both live around here and they fight all the time,” he laughs.
People along the Klamath once fought bitterly over this river, too. But that’s beginning to change.

Four hydroelectric dams may soon be demolished along the Klamath, near the California-Oregon border. Hundreds of miles of the Klamath would run free to the Pacific Ocean — opening up the largest river restoration in U.S. history.

What’s made this possible is compromise, forged over years of negotiation, among upriver and downriver interests, in California and Oregon, farmers and tribes and fishery advocates.

Two incidents of deep and painful loss, in 2001 and 2002, sparked this new era. First, the federal Bureau of Reclamation cut off water supplies to almost all irrigators on the Klamath Irrigation Project upriver, to protect water flows to endangered fish, including salmon. Angry farmers who were losing their crops converged at the main irrigation canal’s controls in Klamath Falls, Oregon, turning the water back on. A crowd of 18,000 cheered them on.

The next year, when irrigators once again were able to take water from the river, Belchik says the resulting low flows were deadly downriver.

“We started getting calls about dead fish,” he says, standing along the riverbank. “There’s tens of thousands of fish, rotting fish, big 20-pound salmon, four deep on all of the shorelines.” He wrinkles his nose. “The smell more than the look. It smells like death.”