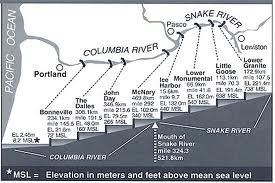 Last week, U.S. Congressman Jim McDermott (D-Wash.) introduced the Salmon Solutions and Planning Act (H.R. 4097) in the House of Representatives. If passed, the bill would provide Congress and federal agencies with up-to-date, thorough information about how best to protect and restore wild salmon and steelhead in the Pacific Northwest’s Columbia and Snake River Basin while also supporting local communities and saving taxpayer dollars.

The bill seeks an approach that puts all restoration options for Columbia and Snake river salmon on the table, including an analysis of lower Snake River dam removal. Removing these four dams is widely considered the most biologically certain way to restore imperiled Snake River salmon and steelhead, yet federal agencies have so far assiduously avoided a full analysis of this potential measure – despite repeated calls to do so from a federal judge.

Here is a statement from Save Our Wild Salmon executive director Joseph Bogaard on the introduction of the Salmon Solutions and Planning Act:

“The Salmon Solutions and Planning Act is a vital step toward fully understanding what’s required to protect and restore the Columbia Basin’s invaluable salmon and steelhead populations. After two decades and more than $11 billion in U.S. taxpayer and Northwest ratepayer spending, these runs continue to hover at or near the dangerously low levels that triggered their protection under the Endangered Species Act in the first place. We can and must do better – for a Northwest icon and a national treasure.

“The best science tells us that removing four outdated, expensive dams on the lower Snake River – just four dams out of the hundreds that make the Columbia Basin the most dammed watershed on earth – is crucial to restoring Snake River salmon and steelhead. We’d hoped that the agencies in charge of protecting these imperiled species would initiate a comprehensive study of dam removal as part of its latest federal salmon plan, but as with past illegal plans, the just-released 2014 edition fails to even discuss the issue – despite clear direction from a U.S. District Court to fully consider lower Snake River dam removal. We applaud Congressman McDermott for introducing the Salmon Solutions and Planning Act as a way to gather the information the nation needs to make smart, cost-effective decisions about the future of our Columbia Basin salmon.”

If passed, H.R. 4097 will chart an effective and common-sense course to restore salmon based on the best available science. The bill calls for the protection and recovery of Columbia and Snake river salmon populations to self-sustaining and harvestable levels. It also aims to address the need for development of renewable energy and a modernized freight transportation system.