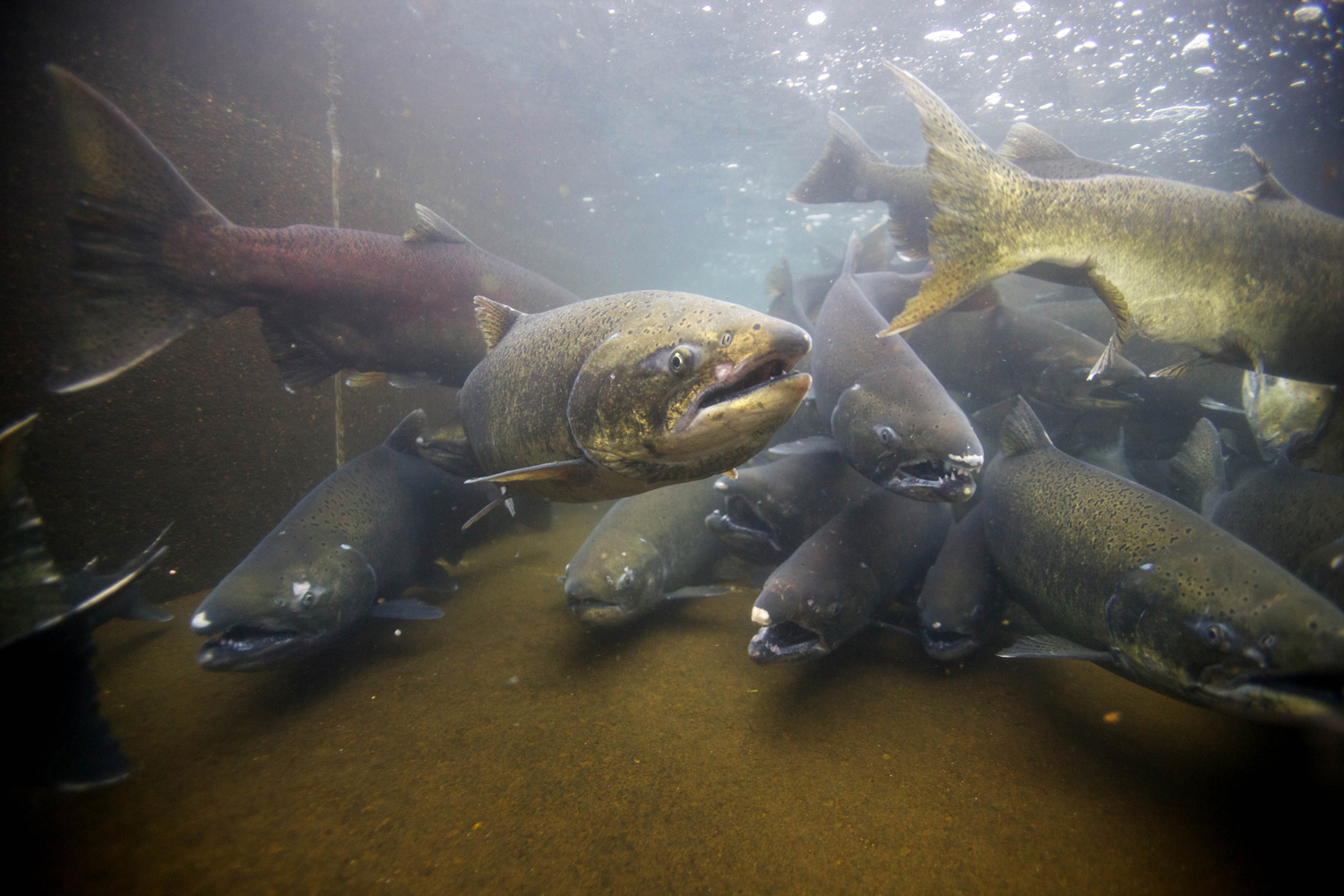 This is the time of year when commercial and sports fishermen generally head into the coastal waters off Southeast Alaska in search of the largest and most prized catch of all — the chinook, also known as king salmon. Most years, they expect to haul in at least 30,000 fish over just a few days in a flurry of fishing. Chinook weigh at least 40 pounds, and fishermen get $5 to $8 a pound, far more than they get for other types of salmon. But in early August, the Alaska Department of Fish and Game made the difficult and unusual decision to cancel commercial and sport chinook fishing for the rest of the summer.

Chinook are born in rivers and spend between several months and two years in freshwater before heading out to the ocean. There, they bulk up on smaller fish for two to five years before returning to their home rivers to spawn.

Some of the chinook swimming off Alaska’s southeast coast this time of year started their lives nearby, but others are from British Columbia or as far south as Oregon and California. Surveys off the coasts of Oregon, Washington and the Gulf of Alaska indicate that chinook stocks across the region are extremely low this year. Many of the fish have been hit by extreme climate conditions during their lifetime.

<http://www.hcn.org/articles/fish-states-restrict-chinook-fisheries/alaskasalmonanchor-jpg/image_view_fullscreen>
A skiff floats beyond the fishing boats docked at the marina in Sitka, in Southeast Alaska, in 2016. This year, the king salmon season has been cancelled there.
Education Images/UIG via Getty Images
In fact, it’s been a double whammy: When the chinook returning this year were juveniles, many of their home rivers were suffering from California’s multi-year drought and the snow droughts <https://www.ncdc.noaa.gov/sotc/drought/201513#west-secthttps://www.ncdc.noaa.gov/sotc/drought/201513>  that hit most of the West in 2014 and 2015. Both made rivers hotter and drier. Then, when the fish swam out to sea, they encountered an enormous mass of warm water in the northeastern Pacific Ocean. This unprecedented phenomenon, which scientists dubbed “the Blob,” developed in late 2013 in the Gulf of Alaska. The next spring, it spread across the entire North Pacific. “It was warm and basically sterile water,” says Laurie Weitkamp <https://www.nwfsc.noaa.gov/contact/display_staffprofile.cfm?staffid=189> , a fisheries biologist who studies salmon for the National Oceanic and Atmospheric Administration. Normally, winter storms mix up the water in the North Pacific, bringing cold, nutrient-rich water towards the surface. But in 2014, that didn’t happen. The lowest levels of nutrients ever seen in the surface waters of the North Pacific starved the phytoplankton, microscopic algae at the base of the food web, which in turn starved zooplankton, tiny aquatic animals that prey on phytoplankton. And that starved the small fish like herring that eat zooplankton.

Chinook eat those small fish. Surveys off the Washington and Oregon coast in 2015 showed extremely low numbers of forage fish for chinook and coho, another salmon species that has suffered in recent years. “The whole prey base got screwed up,” says Weitkamp. These warm, depleted conditions persisted through most of 2016.

Both the drought and the “Blob” are over now, but the extent of the damage they caused will be revealed as the chinook that survived return to spawn. “Those climate conditions kind of ended this year, in 2017, but they’re still going to impact our fisheries for several years,” predicts Nate Mantua, who leads the salmon ecology team at the National Marine Fisheries Service’s Southwest Fisheries Science Center in Santa Cruz, California.

Officials in Alaska believe unusually warm ocean temperatures also played a role in how poorly chinook fared. The decision to close the chinook fishery came after state officials determined that only about half as many fish as are needed to ensure sustainable fisheries were returning to Southeast Alaska’s rivers this year. “If you don’t adhere to your conservation principles, you’re destined to exacerbate the problem in following years,” Charles Swanton, deputy commissioner of the Alaska Department of Fish and Game, says.

California, Washington, Idaho and British Columbia also have severely restricted fisheries for chinook and other salmon species in response to critically low levels of returning salmon. On the Klamath River, poor ocean conditions, drought and disease all contributed to what are likely to prove the lowest numbers in more than 30 years. “We’ve been in a downward spiral in recent years, because the effects of the drought were building on the fishery,” says Eric Schindler, who manages salmon for the Oregon Department of Fish and Wildlife. “This year is bad. I don’t see next year being any better.”

Tracking the cause of downturns in salmon populations is complex, and some researchers are not ready to blame the Blob for the dire straits of Southeast Alaska’s chinook. “We don’t know yet what the real effect of the Blob was on chinook salmon,” Daniel Schindler <https://fish.uw.edu/faculty/daniel-schindler/> , a fisheries professor at University of Washington, says. “The warm conditions in the last few years are unprecedented. But it’s too early to tell if the poor returns this year are due to climate or not.” The notion that Alaska chinook would suffer from warmer oceans defies a historic rule of thumb that salmon from Alaska do better when oceans warm up, which usually increases prey. And other stocks of Alaska salmon are thriving. “Sockeye salmon in Bristol Bay were having one of the strongest returns in history,” Schindler says. Silver salmon in Southeast Alaska are abundant, too.

So while the multiyear Blob was harmful, scientists believe that at least some of Alaska’s salmon fisheries won’t be injured by the long trend of gradually warming oceans. But human-caused climate change clearly is bad news for salmon from California, Oregon and Washington, which contribute to Alaska’s fisheries. “The growing influence of human-caused climate change is likely to make things tougher and tougher for salmon in southern end of its range,” Mantua says.

It may already be doing so: Scientists believe human-caused climate change exacerbated California’s drought and low snowpacks. The drier hotter rivers of recent years are consistent with what scientists expect in the future. Climate change is gradually increasing average water temperatures in the North Pacific, raising the baseline for extreme heating events like the blob. But there’s no compelling evidence that the three years of persistent ocean temperature extremes linked to the Blob were consistent with human-caused climate change, Mantua says.

Although the Blob has dissipated, temperatures in the North Pacific this summer are still several degrees Fahrenheit above normal. And recent research by NOAA shows that salmon still are hurting. “We just did our ocean surveys; it doesn’t look good,” says Weitkamp. “There weren’t many young salmon out there and there wasn’t much for them to eat.” The survey results are expected to be released in September.

Climate models don’t project average water temperatures this warm in the northern Pacific for decades. So cooler, more productive waters likely will return. The fishing community is hoping that’s the case and that the restrictions on fishing this season will help ensure more robust numbers of chinook — and less encumbered fishing — in the future. “We strongly support sustainable management and can only hope that conservation will truly be served by this action,” says Dale Kelley, the executive Director of the Alaska Trollers Association, which represents the 1,000 or so businesses that fish for chinook with hooks and lines. In the meantime, though, they’re hurting: She estimates the troll fleet and its processors will lose $6 million this year because of the cancellation of the chinook fishery.