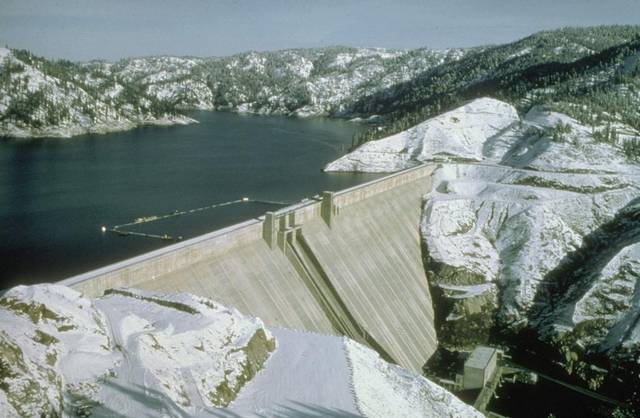 Cool water from Dworshak Dam on Idaho’s North Fork Clearwater River is keeping tailwater temperatures at Lower Granite Dam cool as air temperatures in the lower Snake River rise into the 90s. The water is released to ensure that adult Snake River sockeye salmon, listed as endangered under the federal Endangered Species Act, have a cool passage upstream.

The U.S. Army Corps of Engineers increased the outflow at Dworshak Dam Monday, July 9, from about 10,000 cubic feet per second up to 12.9 kcfs. While most of the outflow is through turbines, some 3.2 kcfs of the outflow is a controlled spill keeping total dissolved gas levels under the Washington state-mandated clean water limit of 110 percent.

“We’ve got the pedal to the metal now while still keeping TDG close to but below the limit,” Steve Hall of the Corps’ Walla Walla District told the interagency Technical Management Team this week at its meeting Wednesday, July 11. TDG is tracking downstream of Dworshak at about 108 to 109 percent, he said.

Air temperatures in the lower Snake River basin are predicted to be in the 90 to 100 degree Fahrenheit range, and as high as 100 through the foreseeable future, he said, and so the increase in flow is needed while sockeye pass the four lower Snake River dams.

The sockeye are responding and passing at a slightly higher number than initially predicted, said Russ Kiefer of the Idaho Department of Fish and Game, although the prediction still was for a small run this year.

“The temperatures are still good for migration,” he said. “We’re seeing nothing that would indicate needing a passage emergency measure this year.”

Migrating adult sockeye hit a thermal block in 2015 as river temperatures rose considerably above the 68 degree F limit set by the Federal Columbia River Power System biological opinion for salmon and steelhead. Some 90 percent of sockeye died before reaching Ice Harbor Dam, the lower of the four Snake River dams. IDFG, NOAA Fisheries and the Nez Perce Tribes set up a rescue project at Lower Granite Dam to trap the adults and haul them to the Eagle Hatchery.

Kiefer added that the conversion rates at the dams are also fairly high, citing a 60 percent conversion rate at Lower Granite Dam, the upper of the four dams. Conversion rates are the percentage of fish that pass one dam downstream and then pass a dam upstream.

However, daily counts are dropping, as is usual this time of year, Wagner said. While 5,435 sockeye passed the dam July 4, daily numbers have been declining all week and just1,806 passed July 10.

The U.S. v Oregon Technical Advisory Committee, which forecasts fish runs in the Columbia River, doubled its forecast of sockeye into the Columbia River at its June 25 meeting. The preseason forecast was 99,000 sockeye and that was increased to 209,000 fish. TAC confirmed that forecast again at its meeting this week.

However, with such a low proportion of returning adults having PIT-tags, biologists are not able to estimate how many of the endangered fish will return this year. The best estimate, Kiefer said, will be the post-season count at Lower Granite Dam.

Actual passage of all sockeye at lower Snake River dams as of July 10 is (from the downriver dam to the upriver dam):

Ice Harbor Dam: 394 this year. Last year the count on the same day was 280 and the 10-year average is 555. Kiefer said that 60 to 80 percent of the sockeye run has historically passed Ice Harbor Dam by July 10.

Recovery of Snake River sockeye salmon could take 50 to 100 years and over the next 25 years cost over $101 million, according to a Snake River Sockeye Salmon Recovery Plan released in 2015 by NOAA Fisheries.

“The species remains at risk of extinction,” says NOAA Fisheries of the fish first listed as endangered under the federal Endangered Species Act in 1991.

Before the turn of the twentieth century, an estimated 150,000 sockeye returned annually to the Snake River basin.