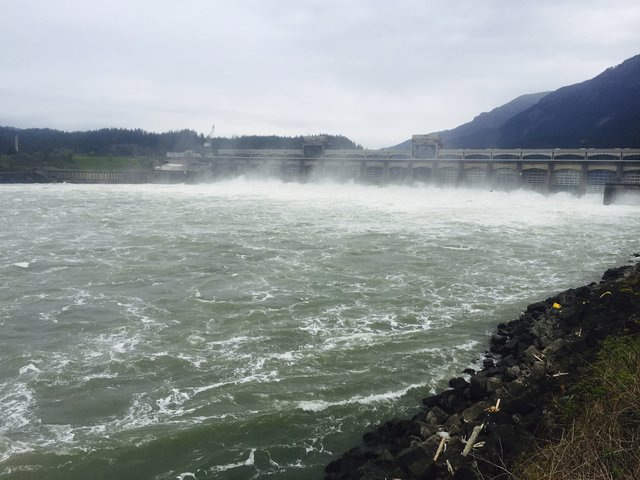 Advocates of more spill at Columbia/Snake river dams for juvenile fish passage and federal dam operating agencies have agreed to a schedule for periodic status conferences and a protocol in a federal court case.

The request for injunctive relief was enjoined with an earlier case argued in the U.S. District Court of Oregon that resulted in a remand of the Columbia River hydropower system’s 2014 biological opinion for salmon and steelhead. The remand was issued by Judge Michael H. Simon in May 2016.

The request, which was brought to Simon in January 2017 by the National Wildlife Foundation and the State of Oregon, with the support of the Nez Perce Tribe, asked the court to begin ordering spill to maximum total dissolved gas levels beginning April 3 this year and to continue for each year of the BiOp remand.

In his March 27 opinion and order, which was amended April 3, Simon agreed that spill earlier in the year at the dams would benefit Endangered Species Act salmon and steelhead, but held off on ordering that spill until next year, saying it was “too rushed,” giving federal agencies time to plan for operational changes at the dams resulting from the earlier spill schedule.

The spill opinion also required the U.S. Army Corps of Engineers to operate bypass and PIT-tag juvenile detection systems at the dams beginning March 1, 2018 (that now occurs in mid-March to early April) and for the Corps to provide timely reviews of future capital investments valued at over $1 million at the dams in order to avoid a “significant risk of bias in the NEPA process,” according to the order.

The plaintiffs could then challenge in court those projects which they believe could bias a National Environmental Policy Act review now in progress by dam operating agencies. However, Simon refused to stop any spending necessary for the safe operation of dams.

Finally, Simon’s amended spill opinion said that he would hold periodic status conferences regarding the spill and planning for the spill, giving the parties 28 days to confer and file recommendations for a schedule for the conferences.

In a May 1 court filing, plaintiffs and defendants agreed to consider protocols for spill at each dam, consider an adaptive management system and work together to develop a spill implementation plan.

They’ll do this by identifying a team of technical representatives to “collaboratively plan and carry out tasks such as modeling and analyses of a range of spill levels and spill patterns as they agree is necessary to afford a basis for identifying 2018 spring fish passage spill levels and spill patterns at each of the eight lower Columbia River and lower Snake River dams,” while working with the interagency Technical Management Team and others to complete the tasks.

The team will take into account spill and gas caps, dam or safety issues, the potential effects of spill levels and patterns on juvenile and adult salmon and steelhead survival, and other factors identified by the Court’s Opinion and Order, according to the joint filing.

They will document the work and will advise the Court that “there are agreed-to spring fish passage spill operations that may be incorporated into a proposed injunction order, or advise the Court of any outstanding disagreements that may necessitate the Court’s involvement to resolve. If necessary, the Court may then set such procedures as it concludes are appropriate to resolve these issues,” the filing says.

The parties will file with the court a joint status report June 15, 2017, with a draft available seven days ahead of time. Follow up in-person conferences will occur in early August and late September.

The status report will have (for each of the dams):

-- whether spill patterns for increased spill have been modeled, tested and/or agreed;

-- whether the parties have agreed to fish passage spill cap operations or identified a biological or other constraint that warrants a dam- specific spill operation below spill cap spill.

It will also include a statement of the tasks completed and a schedule for completing the remaining tasks, with the goal of completing all tasks needed to reach consensus on a 2018 spill implementation plan by September 15, 2017.

In a May 16 court filing, the federal defendants described theirproposal for notifying the court and plaintiffs about timely reviews of future capital investments.

Plaintiffs must respond within 60 days of notification for each project.

Meanwhile, earlier this month four members of the U.S. House of Representatives Northwest congressional delegation delivered a letter to Bonneville Power Administrator Elliot Mainzer, Secretary of the Army Robert Speer, Secretary of Commerce Wilbur Ross and Secretary of the Interior Ryan Zinke, objecting to the additional spill and asking for detailed information on the cost of the region’s fish and wildlife program and the cost of Simon’s order for more spill on ratepayers.

“We believe that the 2008 BiOp achieved consensus on a plan that has demonstrated for several years that it is working to improve salmon recovery while still allowing operation of the federal dams,” the letter says. “We are concerned that plaintiffs’ continued advocacy for additional spill or preventing needed maintenance of the dams as requested in the injunctions is not only unscientifically based, it is likely to be counterproductive.”

A counter letter from 31 conservation and commercial and recreational fishing groups sent to the four U.S. House representatives May 17 said that information in their letter was “based on incomplete or misleading information.”

It went on to say that the restoration of salmon populations is an “opportunity for our region to invest in the economy, create family-wage jobs and improve our quality of life and the health of our environment,” but that goal remains elusive.

The letter reminded the representatives that Simon had rejected the current BiOp, which was the fifth time a federal judge had done so.

“Despite spending by regional electricity customers and American taxpayers totaling $15B - under the direction and guidance of the federal agencies that manage the major Columbia and Snake river dams - not one of the thirteen salmon and steelhead populations listed in the early 1990s as threatened and endangered under the ESA has been delisted; most have shown little or no sign of significant or sustained improvement.”

The full letter is available at
http://www.wildsalmon.org/images/PDFs/congress/2017.Ltr.to.4MOCs.May17.final.pd