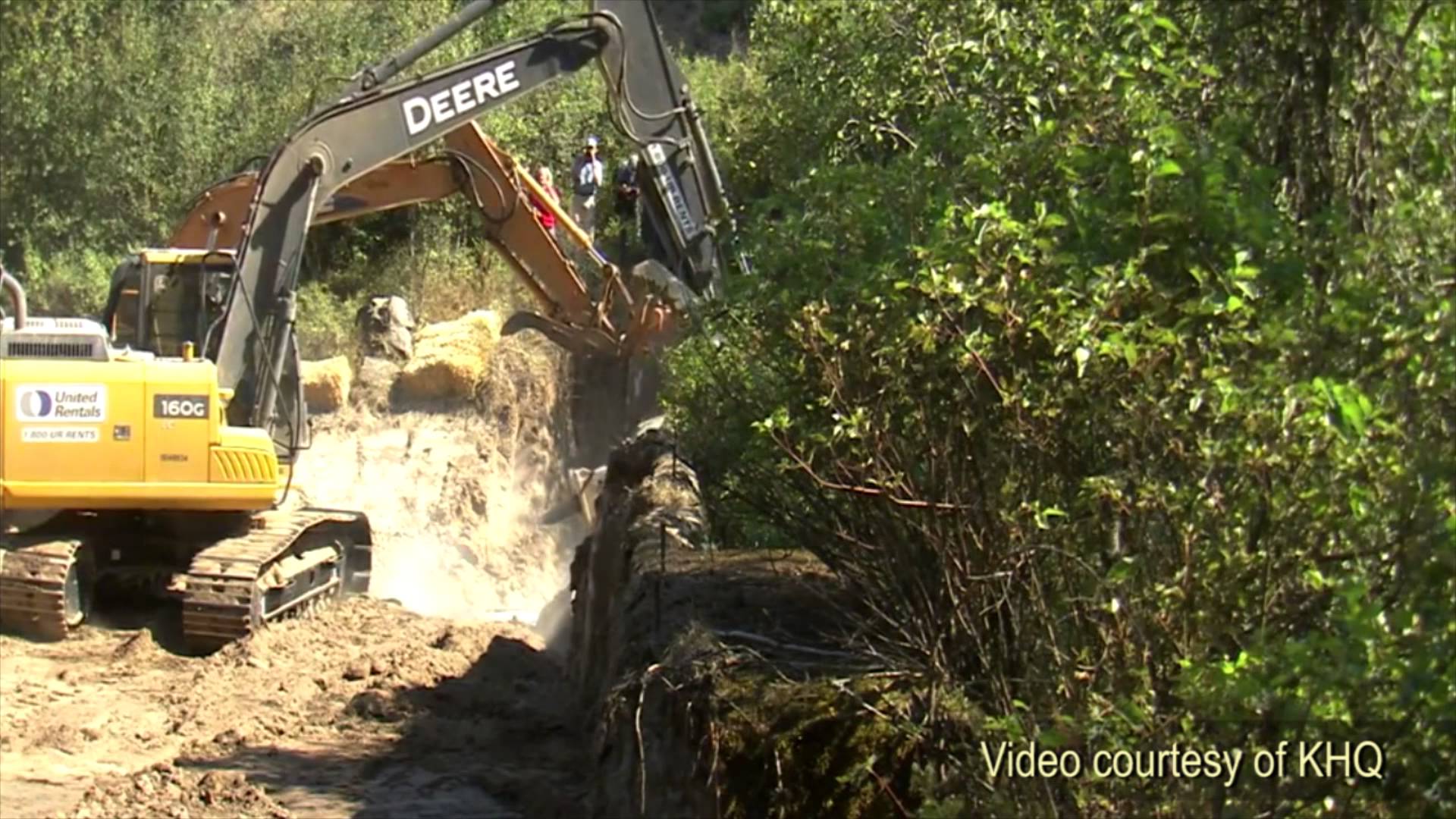 When a couple of concerned citizens witnessed adult steelhead spawning downstream from an obsolete dam outside a small town in Idaho, local agencies came together to remove the fish barrier and restore passage to historic spawning grounds unattainable for nearly 100 years.

City of Troy’s mayor Ken Whitney said Cliff Swanson lives on the outskirts of this Latah County town 11 miles from Moscow. In 2012 he said Swanson took pictures of steelhead spawning below the Dutch Flat Dam.

Swanson said a friend called and told him about seeing the steelhead. He took several still photos and video of spawning fish downstream from the dam.

Swanson’s video got a lot of attention, Whitney said, and a movement to take out the dam got momentum.

According to Brian Knoth, who oversees Potlatch River steelhead monitoring and evaluation for Idaho Fish and Game, the dam was also on his agency’s radar. Since 2005, Knoth said his agency has been monitoring wild steelhead due to their threatened status on the Endangered Species List. He said the Potlatch’s steelhead is an important component of the larger Clearwater River population, a tributary to the Snake River. Knoth said Fish and Game surveys identified Dutch Flat as a barrier to steelhead passage blocking adults from spawning grounds and juveniles from getting downstream.

“Removing the Dutch Flat Dam was one of the first major restoration projects in the Potlatch River watershed,” Knoth said.

Swanson said before the dam was removed a Fish and Game biologist filmed futile attempts by steelhead to jump over the barrier.

Latah County Soil and Water Conservation District got involved with Bill Dansart as the main planner on the project. He said the dam was originally constructed in 1919 to store Troy’s water supply, but by 1925 the reservoir had filled in with sediment.

“It (the reservoir) became a slab of concrete with a bunch of dirt behind it - then it became an area folks used as an unofficial dump site,” Dansart said.

After Snake River Basin steelhead were listed, the species’ habitat, especially habitat degraded as badly as the area around the Dutch Flat Dam, qualified for restoration funding. Not long after Swanson shot his video, a design to demolish the dam was drawn up and a variety of agencies shared the cost burden, including the Bonneville Power Administration and NOAA’s Pacific Coast Salmon Recovery Fund. Environmental Protection Agency money passed through the Idaho Department of Environmental Quality and the City of Troy.

Troy city public works employees spent the better part of the summer of 2013 removing the dam using jack hammer attachments and excavators, Dansart said, but the project didn’t get the same level of attention as the removal of the Elwha or Condit dams in Washington.

“I would say most of the people in the county didn’t know it existed,” Dansart said.

Swanson said you can barely see the tiny stream from a nearby hiking trail that connects Moscow and Troy or an adjacent road.

After the city crews removed the dam they cut in a new channel 10 feet wide and a foot deep for the creek, connecting it to a channel below the dam, Dansart said. Now the stream is carving its own channel.

Whitney said the area looks a lot nicer now; the shrubs, forbs and grass the conservation district planted have all but covered up the former dump site. Since the dam’s removal Dansart said North Latah County Highway District replaced culverts that were impeding fish passage and Idaho Fish and Game are tracking how far fish are getting upstream.

Knoth said in 2015 as part of the state’s monitoring effort radio tags were inserted into adult steelhead coming over Lower Granite Dam, the last of the Lower Snake hydroelectric projects.

“One of the reasons we were putting radio tags in steelhead was to know where they were spawning and how they are interacting with some of the restoration work going on,” Knoth said.

The first time steelhead were documented upstream from the old dam was in 2015. Knoth said three radio-tagged steelhead were tracked migrating past the former dam site and six redds were found in a subsequent spawning ground survey.

Swanson said in 2015 he captured images of steelhead spawning above the old dam site. Steelhead seem to be finding the new access quite suitable. In 2016 Knoth said redd surveys documented five steelhead redds, five live fish and one spawned-out carcass.

Looking for signs of spawning in this tiny stream is part of Fish and Game’s large scale monitoring work in the Big Bear Creek drainage as well as the greater Potlatch River watershed.

“The restoration in the Potlatch is just getting started,” Knoth said.

In the coming years Knoth said he anticipates Fish and Game will be involved with more barrier removals along with projects that add large, woody debris to streams to create more complex habitat, meadow restoration and flow supplementation throughout the Potlatch River basin.