With the number of endangered Puget Sound orcas at a 30-year low, state lawmakers are proposing a number of measures to save the fish-eating killer whales that spend time in the inland waters of the Salish Sea. 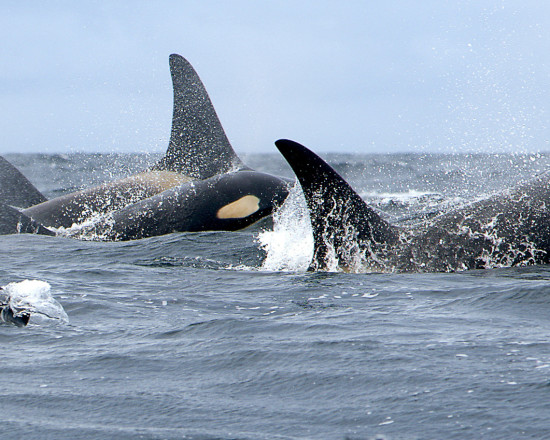 SEATTLE (AP) — With the number of endangered Puget Sound orcas at a 30-year low, state lawmakers want to protect the fish-eating killer whales that spend time in the inland waters of the Salish Sea.

The measures range from boosting hatchery salmon production to increasing marine patrols so that boats keep their distance from the whales.

Many have been sounding the alarm about the orcas' plight since the September death of a juvenile brought the population to 76. Orcas face threats from lack of food, pollution and noise from vessels.

A baby orca has not been born in the last few years. Half of the calves born during a celebrated baby boom have since died. Female orcas are also having pregnancy problems linked to nutritional stress brought on by a low supply of chinook salmon, the whales' preferred food, a recent study found.

"We haven't seen any viable calves born here in the last few years and that is disconcerting," said Brad Hanson, wildlife biologist with the NOAA's Northwest Fisheries Science Center.

Last year, the orcas spent the fewest number of days in the central Salish Sea in four decades, mostly because there wasn't enough salmon for them to eat, said Ken Balcomb, senior scientist with the Center for Whale Research.

One House bill sets aside $1.5 million to produce 10 million more hatchery chinook salmon — a roughly 20 percent boost — so orcas will have more to eat.

Blake and other says there's growing awareness that the fates of two Northwest iconic species — salmon and orcas — are intertwined, and that efforts to save one endangered species could help another.

"The idea is that, overall, you have more fish out there that are available to killer whales," said Penny Becker, wildlife diversity division manager with the state Department of Fish and Wildlife.

She said the agency is committed to ramping up state hatchery production — which has been declining over the past decade — though it would still need to determine where and how best to do that.

Putting more fish in the waters won't necessarily mean whales will get them all. A recent study found that other marine mammals such as sea lions, seals and other killer whales were also feasting on the salmon that Puget Sound orcas prize.

But some skeptics think it should only be a short-term strategy and that efforts should focus on restoring salmon habitat or removing fish barriers including dams.

"We can't stop there. We've got to have a more comprehensive approach that restores ecosystem health," said Joseph Bogaard, executive director with Save Our Wild Salmon, a coalition that is pushing to remove four Snake River dams.

Kurt Beardslee, executive director of the Wild Fish Conservancy, said officials should be looking to limit salmon harvest so orcas can have their share rather than increasing production that could potentially harm wild salmon.

Meanwhile, state Sen. Kevin Ranker, D-Orcas Island, has proposed a package of bills aimed at protecting orcas and the waters they swim in.

Senate Bill 6268 would essentially double to 100 the number of days state wildlife officers are on the water to keep boats a safe distance from orcas.

Orcas use clicks, calls and other sounds to navigate, communicate and forage mainly for salmon. Noise from vessels can interfere with that that.

"We need to continue working on toxins and salmon, but there are issues that we can take on right now," Ranker said.

His bill would also convene a meeting between experts in British Columbia and Washington to discuss strategies to help the orcas.