Truthout Report: Without Major Interventions, the Orca's Days Are Numbered 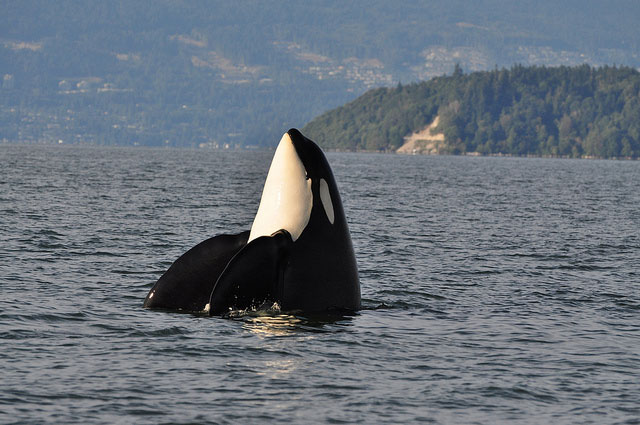 No one is certain of the total number of orcas (otherwise known as "killer whales") that exist in the wild. However, estimates are now around 100,000, and populations are dwindling. In Washington State's Puget Sound and San Juan Islands, the once-large population of orcas has declined to around 80 whales, and the Puget Sound orcas are on the US government's endangered species list.

Why are the orcas disappearing? A variety of factors are in play: Loss of food supply (such as salmon), warming waters, habitat loss, pollution, Naval sonar and war gaming, and ocean acidification are some of the many factors now constellating to make life much more challenging for these iconic whales.

Some reports warn that it could already be too late to save wild orcas.

Experts Truthout spoke with on the matter warned that, without significant intervention to address these and other issues, the orcas' days may well be numbered.

Dr. Paul Spong, a scientist who has been interested in orcas for more than four decades, founded OrcaLab, a land-based whale research station on Hanson Island off the northern coast of Vancouver Island in British Columbia, Canada.

OrcaLab operates on the philosophy that it is possible to study the wild without interfering with the lives or habitat of the wildlife being studied. The scientists work via a network of hydrophones they position around the orcas' "core habitat," a method that allows them to monitor the whales' movements year round, 24 hours a day, over an area of 50 square kilometers.

OrcaLab, in its own words, aims to work towards the "preservation of orca habitat; release and rehabilitation of captive cetaceans … and bringing to an end the dismal era of commercial whaling."

Truthout asked Spong about some of the primary changes in recent years.

"One major change is, their numbers are reducing," he said. "They arrive later, leave earlier, and fewer groups [are] coming."

In the area where OrcaLab functions, the numbers of whales are particularly low. According to Spong, the small population is due to ship and boat noise, seismic exploration, military sonar (which Spong describes as "very disruptive"), and a dramatic increase in large vessel traffic in the area.

But the biggest issue is food.

"They are very specific in the kinds of food they eat," Spong explained. "Orca prefer Chinook salmon and chum, and these are declining in recent decades, and this is directly impacting the whales."

Howard Garrett is the board president of Orca Network, a nonprofit organization that is, according to its website, "dedicated to raising awareness about the whales of the Pacific Northwest, and the importance of providing them healthy and safe habitats."

Along with the factors Spong mentioned that are negatively impacting the local orca population in the Pacific Northwest, Garrett cited the US Navy.

He estimates there to be 82 orcas in the local population, with "little or no increase" since the end of the "capture era" in 1976.

"Given the prey base 100 to 150 years ago, and the size of most other orca communities worldwide, it's likely there were about 200 [local] orcas before the losses from random attacks from fishermen and military, prey depletion due to habitat destruction, capture for the display industry, dams, and overfishing," Garrett added.

Climate Disruption and the Whales

Of course, another giant factor threatens whale populations: anthropogenic climate disruption (ACD). The impact of ACD on the Puget Sound region of Washington is well known, as studies have shown.

Like Spong, Garrett sees one of the primary issues facing orcas in the Pacific Northwest as that of food distribution and abundance, or lack thereof, and sees that as being directly related to ACD.

"Warmer water reduces salmon survival, as demonstrated during the extreme El Niño of 1995-96 that correlated with a 20 percent drop in the Southern Resident [orcas that live in the Pacific Northwest] population between 1996 and 2001," Garrett explained.

Spong emphasizes the issue of food access, and ties it directly to ACD.

Salmon, the orcas' primary food source, live and thrive in a relatively small temperature range in both the oceans and rivers, so when water temperatures are increased, orcas' food supplies diminish rapidly.

"If you look ahead to a century from now, I'm quite fearful that there may not be a food supply for the orcas because of this," Spong said.

Can the Orcas Survive?

Given that there is no immediate solution to ACD, there is obviously no simple fix for the endangerment of orcas. However, there are some things that can be done to mitigate the problems the whales now face.

Garrett said it is important for people to become informed about orcas' struggles, particularly around finding food. He also sees addressing the dams that thwart salmon spawning as a viable action goal.

"Contact President Obama to issue an executive order to remove the four lower Snake River dams to open up 5,500 miles of spawning habitat, historically the greatest source of food for the orcas," Garrett suggested. "A simple memo from Obama to the Army Corps to remove the dams would get the job done, but still needed are approvals from Washington Gov. Inslee and Senators Cantwell and Murray, so please call them too."

Spong echoed the sentiment, emphasizing dismantling dams would be a key first step.

"If there is any hope in recovering these orca populations, there must be an effort to boost their food supply by working towards taking down dams in rivers where salmon spawn," he said. "Restricting commercial fisheries from taking so many Chinook and chum salmon, as well as imposing more restrictions on the sport fishers who are doing the same also can be addressed, because these are literally taking the food away from the orcas."

The jury is out as to whether the orca can survive the impacts of ACD. But for now, there are some concrete actions that can be taken to, at the very least, buy them some time.

Dahr Jamail, a Truthout staff reporter, is the author of The Will to Resist: Soldiers Who Refuse to Fight in Iraq and Afghanistan (Haymarket Books, 2009), and Beyond the Green Zone: Dispatches From an Unembedded Journalist in Occupied Iraq (Haymarket Books, 2007). Jamail reported from Iraq for more than a year, as well as from Lebanon, Syria, Jordan and Turkey over the last 10 years, and has won the Martha Gellhorn Award for Investigative Journalism, among other awards.

His third book, The Mass Destruction of Iraq: Why It Is Happening, and Who Is Responsible, co-written with William Rivers Pitt, is available now on Amazon.

Dahr Jamail is the author of the book, The End of Ice, forthcoming from The New Press. He lives and works in Washington State.