The Daily Astorian: Orcas back at Columbia River as 2015 tracking ends 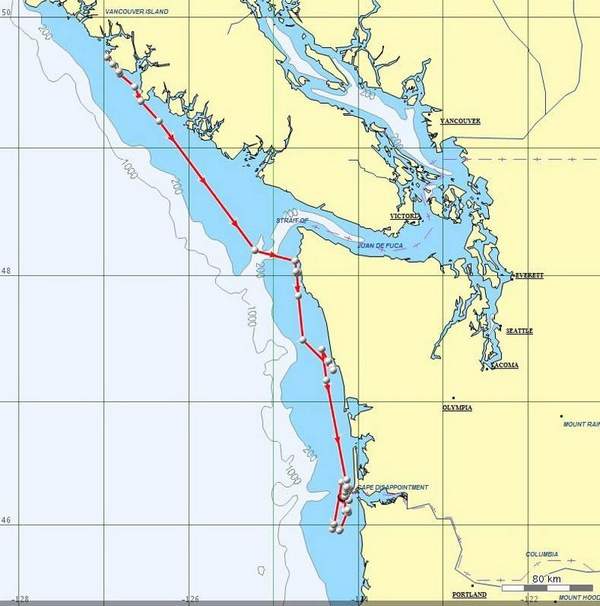 Members of the L pod of Southern Resident Killer Whales came back to the mouth of the Columbia River for Memorial Day weekend.

CAPE DISAPPOINTMENT, Wash. — Orcas made it back to the vicinity of the Long Beach Peninsula in time for the Memorial Day weekend as this year’s satellite-tracking program came to an end.

“As we sat on the beach on Long Beach Peninsula on Memorial weekend, we saw killer whales fishing just on the other side of the surf. It was very cool,” visitor Geneane Bentley Stahl wrote.

Orca L84, an adult male member of the L pod of Southern Resident Killer Whales usually identified with Puget Sound, along with other family members, made a rapid swim from the west coast of Canada’s Vancouver Island to the Columbia River plume between May 11 and May 17, NOAA Fisheries West Coast-Science & Management reported.

The orcas then went a little farther south for a few days, hunting off Tillamook Head and Clatsop Beach, before returning to the Columbia River on the morning of May 21.

Scientists from Olympia-based Cascadia Research Collective intercepted the whales and observed L84 and a few other members of his pod, or extended family group.

The tag that permitted scientists and the public to keep such close watch on orca movements along the outer coast this winter and spring is designed to eventually fall off, and apparently did so late last month, so this will be this year’s last tracking report.

It has been a fascinating set of sightings. This year at least, all or most of L pod — sometimes joined by members of the K and J pods — spent four months ranging up and down the West Coast between Vancouver Island and northern California. Much of that time was centered in the waters of the Columbia River plume, and the ocean off the mouths of Willapa Bay and Grays Harbor. This year joins 2013 as a successful deployment of the satellite tags; in 2014, the tag came off soon after it was attached to an orca.