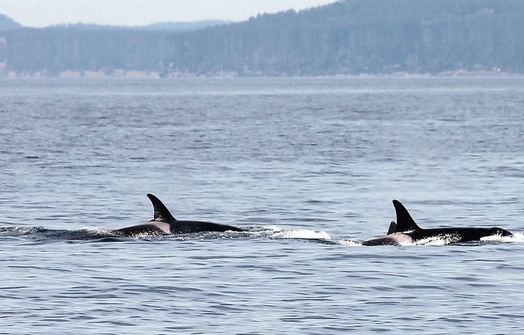 Even with Endangered Species Act protection, two iconic Salish Sea species are struggling, and a newly formed alliance is calling attention to their plight.

“It’s pretty critical that we have to do something, so let’s put the prey and predator together and let’s save them,” said Ken Balcomb, executive director of the Center for Whale Research based on San Juan Island.
The center is one of many local, national and international groups that recently formed the Orca Salmon Alliance.

Alliance members shared their mission with the public for the first time at the Seattle Aquarium last week, with an Oct. 7 event called Intertwined Fates: The Orca-Salmon Connection.

Seattle Aquarium CEO and President Bob Davidson said it was a historic occasion having “orca and salmon people” all in the same room.

The connection between salmon and orcas is well known — salmon are the whales’ primary food source — but researchers often don’t focus on both.

The federal and state endangered species listings for orcas calls the decline in chinook salmon the greatest challenge to southern resident orca recovery. Yet after 10 years of federal protection for the whales, the population has not grown.

The southern resident orcas stay along the Washington and Oregon coasts in three pods, or family units, called J, K and L.

The population has remained steady at around 80 whales since 1995.

The deaths of new calves in 2013 and 2014 heightened concerns about the whales’ demise, Garrett said.

When orca J32, known as Rhapsody, was found dead and carrying a full-term calf near Bristish Columbia in December 2014, it was a “devastating blow for those who watch and care about the orcas,” he said.

The loss of Rhapsody was the final straw, “prompting many to search for ways to rebuild chinook salmon runs as quickly as possible,” he said.

And so the Orca Salmon Alliance was born.

The group has big goals for increasing chinook salmon numbers and in turn supporting the orcas that need between 100 and 300 pounds of fish per day to maintain their weight, according to NOAA.

The quickest way to progress would be removing four dams from the Snake River, which would open

140 miles of riverbed and 5,500 miles of upstream habitat for salmon, Garrett said.

Restoring chinook populations is essential because the southern resident orcas rely on the salmon for about 80 percent of their diet, unlike transient orcas that primarily eat mammals.
“Their jaws and teeth are not as robust as mammal-eating orcas,” Garrett said.

If they don’t have access to their food supply, they will starve, he said.

Earthjustice oceans program managing attorney Steve Mashuda said the legal agency has focused on protecting salmon on the Columbia River system. The Skagit River, the second largest in Puget Sound behind the Columbia, is also important for salmon.

“The Skagit River is important because it’s got the biggest opportunity for chinook recovery in Puget Sound, and it comes down to estuary health,” he said.

“It’s really the classic combination of things that is concerning,” Mashuda said. “You’ve got legacy pollution, as well as new things like stormwater.”

Plus, there are dams and culverts blocking fish access to spawning areas, he said.

So what will help?

“It would be good to see a handful of really big projects to restore systems like the Skagit River to historic (salmon-bearing) capacity,” Mashuda said.

There has been some good news this year. Four orcas were born, though experts say the mortality rate is high in the animals’ first year.

The Orca Salmon Alliance is asking citizens to contact state Department of Fish and Wildlife Director Jim Unsworth, who set up an online comment system called Washington’s Wild Future, or other state and federal officials to urge more action to save these Salish Sea species.