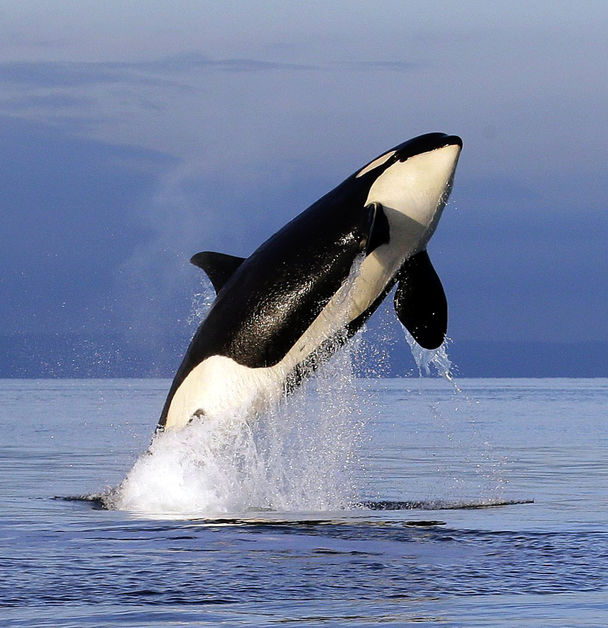 Puget Sound’s already small killer-whale population has declined in the decade since it was protected under the Endangered Species Act. Some experts view the death this month of a pregnant female orca as an alarm bell for the region’s southern residents.

The death of J32, the pregnant orca known as Rhapsody, is renewing concern among some scientists about the fate of the rest of Puget Sound's southern resident killer whales.

He’s trailed them and photographed them, mapped their family trees and counted their offspring, coming to identify individuals by their markings, sometimes even ascribing personalities based on behavior.

For much of the past 40 years, the dean of San Juan Island orca research has vacillated between hope and frustration about the future of Puget Sound’s southern resident killer whales.

But the death this month of J32, an 18-year-old orca known as Rhapsody — who was pregnant with a nearly full-term female calf — is pushing Ken Balcomb closer to despair.

“The death of this particular whale for me shows that we’re at a point in history where we need to wake up to what we have to consider: ‘Do we want whales or not?’ ” said Balcomb, with the Center for Whale Research.

With 2015 marking the 10th anniversary of the government’s decision to protect these orcas under the Endangered Species Act (ESA), the numbers certainly don’t look good.

The population of J, K and L pods has dropped from a high of 99 in 1995 to 77 this month — the lowest since 1985. No whale has successfully given birth in more than two years — a first in the decades since whales have been monitored. And the small number of female whales able and likely to give birth reduces the potential for a speedy rebound.

In fact scientists had hoped young J32, who was just coming into adulthood, would help turn that pattern around for decades to come.

“We’ve not only lost her, but we’ve lost all of her future reproductive potential, which will potentially have an impact on the population,” said Brad Hanson, killer-whale expert with the National Oceanic and Atmospheric Administration’s (NOAA) Northwest Fisheries Science Center. “That’s disconcerting.”
Even the apparent cause of J32’s demise — an infection spread by the death of her unborn calf — leads Balcomb to suspect the worst. He thinks the whales’ chief source of food, chinook salmon, is in such short supply that J32 relied on its own blubber, releasing stored contaminants that harmed her immune and reproductive systems.

But officials overseeing whale recovery say it’s too soon to say the situation is, in fact, dire. The root cause of the infection’s spread is not yet clear and may prove complex. It’s not known if the lack of successful new births is a trend or anomaly. And whale numbers have been lower than this before and bounced back, suggesting to some that there is room for optimism.

After all, said Will Stelle, West Coast administrator for NOAA Fisheries, Snake River sockeye runs were so depleted in 1992 that only one fish — known as Lonesome Larry — returned to spawn in Idaho’s Redfish Lake. This year, after decades of work by scientists, 1,600 fish returned, nearly 500 of which were naturally spawned.

“That’s not to say the issues around Snake River sockeye are the same — they’re not,” Stelle said. “But if you look in the rearview mirror, you’ll see that in fact over the last decade we’ve made substantial progress in building the basic foundation for a long-term conservation strategy for southern residents. We’re by no means there. But a decade ago we were in the dark ages.

But even Stelle agreed a central question remains: How much time do orcas have?

Salmon declines
J32 was born into a family where adult females tended to die early. She was the first and, presumably, only calf of a 15-year-old whale that died two years later. The matriarch of the family died a year after that at 37 — early for a species with a life span similar to humans.

But it’s a sad irony that this salmon-eating machine wound up dead in front of a chinook-fishing charter business in British Columbia.

Long before her carcass was towed ashore on the east side of Vancouver Island near Comox, B.C., early this month, scientists had begun to wrestle with the role salmon declines may be playing in whale survival.

“The reality is, the basic problem is food,” Balcomb said.

In the 1960s and 1970s, an orca population that a century earlier may have numbered anywhere from 140 to 200 was decimated by the aquarium trade. Entrepreneurs drove orcas into net pens in coves and sold them to marine parks around the globe until their numbers had plummeted to just 71 in 1974.

Only in the last 10 years have researchers truly documented their troubles.

“Since then we’ve improved our understanding of the individuals themselves, their population dynamics, their geographic distribution and diet and pollutant loading and contaminants and the effects of all that on productivity,” Stelle said.

But two of the whales’ three biggest problems — the buildup of pollutants such as DDT and polychlorinated biphenyls in their blubber, and disturbance by marine traffic — appear to be worsened by a third, a reduction in available prey.

These whales can eat sockeye and halibut, but overwhelmingly prefer fatty chinook from Puget Sound and Canada’s Fraser River, distinguishing them from other fish by using sonar to sense differences in the animals’ swim bladders. And Puget Sound chinook numbers have dropped to about 10 percent of their historic high. They, too, are listed for protection under the ESA.

When killer whales are hungry, research suggests they may metabolize poisons built up in their fat over years, and expend energy they can’t afford if they have to avoid disturbance from boats and other traffic.

Yet scientists continue to disagree on how much of a role that has ever played in any deaths. Few whales wash up dead for them to study. Among those that have, only one — Rhapsody’s uncle, J18 — offered clues that led some, but not all, to believe hunger was a factor in his death.
Government scientists certainly agree that a diminished food supply is a major issue. But they’re still running tests on J32’s organs, skin and fatty tissue to help narrow down her health issues more precisely.

“If southern residents are on a lower nutritional plane, then the effects of contaminants may be allowed to cause some sort of problem in a random way that disease events would be able to take over,” Hanson said. “But a lot of times what we’re seeing is these skinny animals and a lot of people say ‘these whales are starving to death.’ But it’s not that simple.”

For example, whales hunt in groups and sometimes share prey, and may give away food to others that they themselves could use.

Regardless of whether food availability helped trigger her death, government researchers share some of Balcomb’s concerns about the state of the population.

“It’s not so much that there are fewer reproductive-age females now than there used to be,” said NOAA whale scientist Mike Ford, “but rather that they may not be giving birth as often as expected.”

Deep concern
For Balcomb, the loss of J32 suggests it’s time to consider drastic measures, such as a ban or steep curtailment in chinook fishing, even though fishing is likely the least of the threats chinook face.

“It’s a wake-up call — we know what the problem is, whether it’s dams or fishing or habitat destruction,” he said. “It’s just what happens when millions of people move into the watershed. (But) stopping fishing, at least for a while, is something we can do immediately.”

Stelle, whose agency helps oversee chinook-harvest levels, said fishing has been curtailed already by about 30 percent in agreements with the Canadians, but he couldn’t conceive of a day when he’d seriously consider an outright ban, which would violate tribal-treaty rights. Still, he doesn’t rule out even more drastic cuts.

Stelle, like most experts, maintains that one of the hardest problems to address for orcas is controlling stormwater so even more contaminants aren’t flushed into the Sound, where they can work their way up the killer whale food chain. That is likely an expensive fix.

The other is reducing development in areas harmful to chinook survival — estuaries, floodplains, areas that alter drainage into river beds. But that problem is made ever more complex by the fact that dozens of government entities oversee all that decision-making.

“The particular challenges I think that are daunting can best be illustrated by driving south on I-5 and looking around,” he said. “That built-out landscape fundamentally poses the most significant challenge for us. It is: How do we reconcile the continued human-population growth projected for the basin with trying to rebuild the productivity of the most important habitats for orcas and their prey.”

Martha Kongsgaard, who leads the Puget Sound Partnership, a government agency charged with cleaning up the Sound, agreed J32’s death puts into relief just how much is at stake if the region doesn’t pick up the pace in tackling these problems.

“You don’t want to raise the alarm every time a whale dies, but I think we are really on the brink of possibly losing them,” she said. “And we ignore the orcas’ incredible totemic and symbolic power at our peril. They’re telling us it’s an emergency right now.”