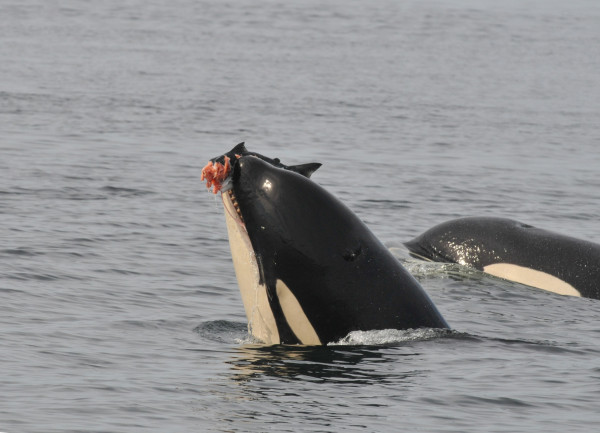 Southern-resident orcas depend on a wide diversity of chinook-salmon runs throughout a big geographic range, according to the analysis by NOAA Fisheries and the Washington Department of Fish and Wildlife.

A new look at just where orcas are eating big kings reveals the importance of rivers in north and south Puget Sound to the orcas’ survival. Even the Puyallup, Green and Duwamish rivers count for the top predators.

The Nooksack, Elwha, Dungeness, Skagit, Stillaguamish and Snohomish to the north and Nisqually, Puyallup, Green, Duwamish, Deschutes and Hood Canal river systems to the south were among the rivers most important to the whales for providing the chinook that the critically endangered southern-resident killer whales eat, according to the analysis by NOAA Fisheries and the Washington Department of Fish and Wildlife.

The preliminary findings also shed new light on the wide variety of chinook stocks needed by the whales. Rather than being animals only of the Salish Sea, including Puget Sound, the southern residents also are targeting chinook runs headed to rivers all up and down the coast.

The analysis was built by integrating the results of drone surveys of the whales that reveal body condition with DNA analysis of scat and scales and other food scraps collected by researchers in the field.

Scientists considered three factors in ranking the relative importance of rivers for the orcas’ diet: the home range of the whales, evidence that the whales prey on chinook from a river that overlaps with their home range, and evidence that the river is feeding the orcas in winter. Rivers that helped orcas through the lean winter months were given extra weight in the ranking.

Drone photography has shown that the whales seem to have a harder time finding food in winter, judging by their skinnier appearance in May, compared with images of the same whales captured in September after they have been feeding on summer fish runs, said John Durban, Leader, Cetacean Health and Life History Program at NOAA’s Southwest Fisheries Science Center in La Jolla, California.

Durban has been using drones to document the body condition of the southern residents since 2008. The photos document a shifting baseline toward skinnier whales, particularly mothers and calves, Durban said. “There is a growing recognition they are in poor condition presently,” he said.

The southern residents rely solely on fish for their diet, and preferentially target chinook salmon, the biggest, fattiest fish. The southern-resident orca population is unique in the world and down to only 75 animals, in part because they don’t have enough food to survive. Several studies have nailed lack of chinook as the leading factor in the whales’ continued decline.

Wide-ranging top predators capable of swimming many miles a day, the southern residents can sample their environment and cruise to fishing grounds targeting multiple runs across a broad geography in every season of the year.

The list of rivers is intended to identify chinook-salmon stocks important to southern-resident killer whales to assist in setting priorities to increase critical prey for the whales.

“They are particularly in need of additional food right now because of their decline and lack of population growth,” said Mike Ford, director of the conservation biology division of the NOAA’s Northwest Fisheries Science Center in Seattle.

Research has shown that the whales will eat other fish — chum, coho, steelhead, halibut and lingcod. But their preference overwhelmingly is chinook — and in particular, runs that are themselves endangered or threatened, including Puget Sound chinook.

While the analysis clearly shows chinook is the orcas’ main food source, it also underscores that it will take a broad recovery effort to supply the orcas’ needs for a diverse range of chinook stocks across their home range.

“One of the things that has been challenging about the whole prey problem is you can’t point to just a single stock and say, if we only fixed that, that would do it,” Ford said. “They utilize a wide variety of stocks.”

Pumping up hatchery production to get more chinook in the rivers has to be weighed against the danger of swamping wild chinook runs also struggling for survival.

NOAA has been working to reform hatchery practices to protect vulnerable wild fish, “and we don’t want to impact that at all with new hatchery releases for southern resident killer whales,” said Lynne Barre, director of the Seattle branch of the protected resources division for NOAA.

Any new hatchery programs, such as those that are under consideration by the governor’s task force on orca recovery, would have to be federally approved under genetic management plans intended to protect wild fish. In some instances, it might make more sense to focus on habitat restoration rather than increasing hatchery releases, Barre said. “It has to be evaluated on a watershed level.

“It’s not just ‘let’s make more fish to feed the whales,’ hold on, there are a few things to consider.’”

She said the list is intended to help managers make smart investments in salmon recovery. “It gives us a better indication of where we can invest to benefit the whales.”

The model for the analysis was developed in cooperation with NOAA Fisheries Northwest Fisheries Science Center in Seattle, whose scientists generated much of the data.