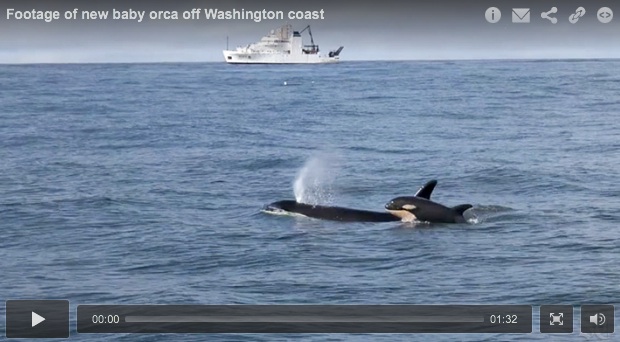 NOAA Fisheries researchers tracking killer whales off the Northwest coast took this video of a new calf from the endangered wild southern resident orca population that spends much of its time in Puget Sound. These whales often make winter forays along the Washington and Oregon coasts, and good weather and ocean conditions gave researchers excellent access during a three-week cruise, according to a statement released by NOAA Fisheries.

The research crew observed the calf with other whales in the L-pod, one of three families of southern resident killer whales, according to Brad Hanson, a biologist with the National Oceanic and Atmospheric Administration Fisheries.

This is the third calf documented this year for the southern residents. Hanson told the Associated Press last month that the baby looks great and was very active when seen.

The scientists, who recently completed the cruise, worked on board a NOAA research ship based in Newport, Ore. Some of the whales were tagged, so scientists were able to follow the whales with the aid of satellite technology. At times, the scientists worked out of a Zodiac boat that allowed them to scoop up scat and bits of prey left behind as they researched the orcas’ diets, according to Michael Milstein, a NOAA Fisheries spokesman.

“They were able to be with the whales 24 hours a day for a few stretches, and they were really happy about that,” Milstein said.

The southern resident killer whales were designated as endangered in 2005. Possible factors in their population decline include the quantity and quality of their prey, as well as toxic chemicals and disturbance from sound and vessel traffic, according to NOAA Fisheries.