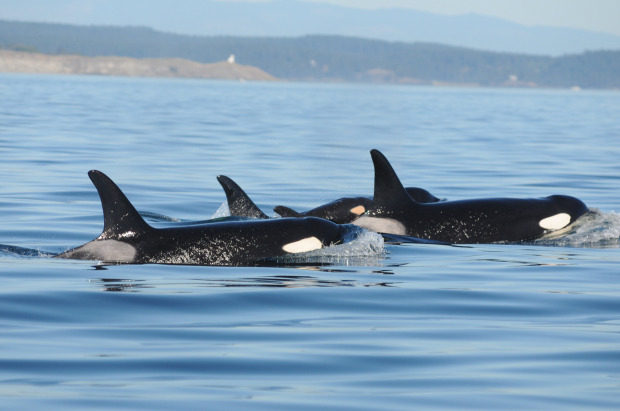 FRIDAY HARBOR — A killer whale born to much hope in early September apparently died while its pod was in the open ocean off Washington or British Columbia, the Center for Whale Research said.
The baby was the first known calf born since 2012 to a population of endangered orcas that frequent Puget Sound in Washington.

It has not been seen since its pod returned in recent days to inland waters of western Washington, said center’s Ken Balcomb.

“The baby is gone,” he said Tuesday.

The pod was offshore for a week to 10 days, and the orca designated L-120 might have been lost in a storm in the middle of last week, Balcomb said.

“A baby would not be without its mother for that long of a period. They generally stick right with its mother,” said Shari Tarantino, president of the board of directors at Orca Conservancy, a Seattle-based non-profit.

The baby’s body has not been found, she said, but it would be hard to find unless it washes ashore.

The baby was a member of “L pod,” one of three closely tracked families within the dwindling Puget Sound population.

Researchers observed the pod, but not the baby, on Friday in Puget Sound, on Saturday in the eastern Strait of Juan de Fuca, and on Monday in Haro Strait, between San Juan Island and Victoria, British Columbia.

The mother is there, aunt’s there, big brother,” Balcomb said. “The baby didn’t make it.”

That leaves 78 killer whales in the Puget Sound population.  In 2005, the group was protected under the Endangered Species Act.

The newborn was spotted in the first week of September off San Juan Island. Two other whales are presumed dead after disappearing earlier this year, so the birth was hailed.

“We were being guardedly optimistic that a turning point had been reached, but that is not the case,” Balcomb said.

The unique population numbered more than 140 animals decades ago but declined to a low of 71 in the 1970s, when dozens were captured for marine parks and aquariums. Then orcas were listed as endangered in 2005.

The striking black and white whales have come to symbolize the Pacific Northwest. Individual whales are identified by slight variations in the shape of their dorsal fins and distinctive whitish-gray patch of pigment behind the dorsal fin, called a saddle patch.

The Puget Sound killer whales primarily eat fish, rather than other marine mammals. Offspring tend to stay with their mothers for life.