LATEST: An unpublished report by NOAA scientist Dr. Brad Hanson et al documents predation by Southern Resident Killer Whales of Snake River and Upper Columbia chinook salmon in the Winter-Spring 2009. Feces collection from the L pod occurred several miles west of Cape Disappointment just north of the mouth of the Columbia River. NOAA scientists have determined that “perhaps the single greatest change in food availability for resident killer whales since the late 1800s has been the decline of salmon in the Columbia River basin.”

Read the study from NOAA scientists.

Research shows that orcas are hungry, need more chinook: Hormone research by scientists at University of Washington’s Center for Conservation Biology have found the “data most strongly supports the reduced prey hypothesis” and concludes that  “it seems clear that mitigation efforts to increase number and quality of available prey to Southern resident killer whales will be an important first step towards assuring SRKW recovery."

Read more from the Center for Conservation Biology.

“This new baby will not have a life without salmon. Salmon make up the majority of their diet and they are good at finding and catching them; but, what happens if salmon populations continue to decline?"- Ken Balcomb of the Center for Whale Research reacting to the recent identification of a new member of the K-pod from the Salish Sea and Puget Sound, June 2010

Full Text of the Letter from Scientists 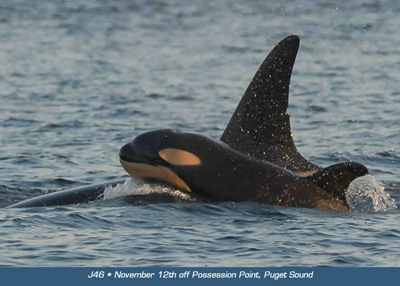 But this endangered population faces several dangerous threats. Their food is very often contaminated with long-lived poisons (PCBs and PBDEs).  Being dependant on a form of sonar called echolocation, they have suffered with the increased noise that accompanies increases is the size and number of vessels on Puget Sound. Their population is so tiny (fewer than 90 whales) and their reproductive rates are so slow that it takes them a long time to add to their population.  And, perhaps most importantly, these giant marine mammals require a lot of food – and they aren’t getting enough.

The federal agency responsible for trying to recover these whales won’t say which problem is “primarily” responsible for their decline, but clearly these five-ton mammals cannot recover without enough food to eat.  Insufficient prey leads not only to starvation, but to increased mortality from disease and increased susceptibility to toxins, increased calf mortality, and drastically lower reproductive rates. 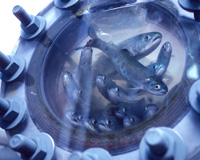 That’s where Columbia/Snake salmon come in.

Southern Residents feed primarily on chinook salmon. In fact, the government estimates that even at its current depleted population level, this population of fewer than 90 animals may require 1.75 million chinook each year.

When the Southern Resident orcas are in the San Juan Islands off the northwest coast of Washington, they feed overwhelmingly on salmon from Canada’s Fraser River. But when they leave this area and head into the Pacific each winter, they must rely on chinook salmon from the other major salmon rivers – the Sacramento, the Klamath, and the Columbia. None of them is a shadow of what it used to be.

At the turn of the last century, up to 30 million salmon returned to the Columbia-Snake River Basin, making it the most productive salmon-producing river system in the world. But today, only than one percent of that historic number returns to spawn. Chinook (like other salmon populations) have plummeted, due largely to dam construction and habitat degradation on the Columbia and its largest tributary, the Snake, which have wiped out entire runs and severely limited the food supply of Puget Sound orcas. All species of chinook salmon on the Columbia- Snake are either listed as endangered or already extinct. This has proved devastating for the salmon, the fishermen, and now the killer whales.

Leading Northwest scientists and orca advocates have called for the government to remove the four outdated federal dams on the lower Snake River. They say this will restore Columbia-Snake River salmon and renew a critical food source for endangered Puget Sound orca populations.

The science is clear that removing the four lower Snake River dams is the key to saving the Snake River’s four distinct salmon populations, including the chinook that are so important to the Southern Residents.  Coupled with appropriate harvest controls, sound land-use regulations, renewable energy alternatives and hatchery reform, lower Snake River dam removal could restore salmon abundance to 15 million acres of forest, high-desert and wilderness areas, for productive use by people, communities and iconic predators like the Southern Resident orcas.

The government initially opposed listing Southern Residents as an endangered species. After a federal court rejected the government’s position, Southern Residents were listed in 2005. The government then developed a plan to help guide efforts to recovery Southern Residents to a healthy population.  Prepared with input from the leading orca scientists in the United States and Canada, the plan contains two findings that should remain front and center as we contemplate the perils facing these spectacular icons of Puget Sound:

- “It is vital that meaningful increases in salmon abundance be achieved above and beyond those associated with periods of favorable ocean productivity.”  SRKW Recovery Plan, p. V-8 (emphasis added).

- The SRKW population must increase by an average 2.3 percent per year for 28 years – that is, to 164 whales – in order to be removed from the Endangered Species list. The population today is 88, the same as it was when it was listed as endangered five years ago. p. IV-4.

Orca scientists and advocates sound off

“Restoring Columbia River chinook salmon is the single most important thing we can do to ensure the future survival of the Southern Resident Community of killer whales. We cannot hope to restore the killer whale population without also restoring the salmon upon which these whales have depended for thousands of years. Their futures are intricately linked."

"The new Federal salmon plan for the Columbia and Snake rivers is no better than previous plans in providing access to the basin’s best remaining salmon habitat in the upper reaches of the Snake River. The resulting declining salmon runs have a very real impact on the 88 endangered southern resident orcas that depend on these fish, as they have for centuries. As the salmon disappear, the orcas go hungry."

"Our leaders must look for solutions not only in Puget Sound, but also in the rivers that bring the salmon to the sea throughout the Northwest. The great salmon rivers like the Columbia and Snake can once again produce the healthy runs of chinook, on which our majestic orcas feed, but only if we recover salmon habitat. We must act quickly to restore clean water, abundant, sustainable salmon populations, and a safe home for orcas. The scientists tell us there is no time to waste."