From the desk of Howard Garrett, co-director of Orcanetwork

Seeing orcas cruising by seems to bring out the best in people, and many residents around Puget Sound and beyond are often thrilled to see members of an extended family known as the Southern resident orcas (J, K, and L pods) foraging and playing in the waters of the Puget Sound. Watching orcas is like a drug-free mood lifter. People seem to open their eyes wide, smile and share their excitement when viewing the huge, graceful whales travelling in tight family groups, rising up to look around, or leaping clear out of the water in a mighty breach. Since the mid-1970s this tight-knit orca community has been the most watched and studied population of cetaceans on the planet. Researchers and fans alike have learned to recognize each individual whale, year after year, including their family histories.

This particular clan of orcas is precariously close to extinction, however, largely due to the scarcity of chinook salmon, their primary, traditional food source. Chinook comprise about 80% of their diet, along with a side dish of chum salmon during fall months. These orcas refuse to deviate from that menu even when faced with starvation, as was shown by the drastically ramped up mortalities between 1995 and 2001 that correlated closely with region-wide declines in chinook numbers. The resulting 20 percent drop in the population to only 78 individuals in 2001 prompted the listing of this distinct population as endangered under the ESA in November, 2005. The most recent official count shows only 84 individuals.

Most of the dietary studies have been done in summer months around the San Juan Islands, where these orcas are easily found chomping on Fraser River chinook from late spring to early fall. They tend to spend winter and spring at sea, however, and until recently there was very little clear data on where they go or what they are eating in the open ocean waters.

It is known that the famed upper Columbia/Snake River chinook - the ones that began life far, far upriver and must climb the highest mountains in order to return as adults to spawn themselves - were generally the biggest and most plentiful fish. Many of those famous populations - like the fabled "June hogs" have disappeared as a consequence of the construction of dams like Grand Coulee, but a few still remain. They start their journey home early, gathering first in the salt water at the mouth of the river in the winter and spring, to be able reach their far-flung streambed destinations before winter returns. Historically, these were the most bountiful runs of chinook found anywhere in teh world, but are now at just a few percentage points of their former numbers largely as the result of dams and other forms of habitat destruction.

Since 2006, winter data has trickled in indicating Southern Resident orcas eating upper Columbia and Snake River chinook. But the best evidence is just in from a young adult male orca from K pod, K25, (Scoter). On December 29, 2012 NOAA researchers tagged him with a satellite transmitter off Vashon Island. K25 always travels with his K pod family, and as of February 22 the tag was still broadcasting location data. A look at NOAA’s maps of his travels show that at least five of the maps, between January 21 and February 8 (to date) show that they consistently milled around, presumably foraging, near the mouth of the Columbia. 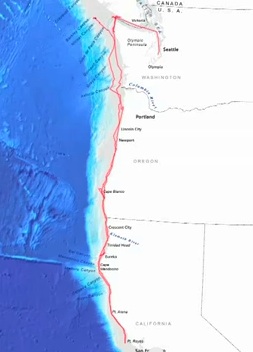 Take a look at this 90 second video showing the travels of K pod so far this winter. They are seen off the coast of Washington State, northern California, and everyone in between - but with a clear preference for the waters just off the mouth of the Columbia River, and just to the north along the Washington State Coast.

These initial tagging data strongly reinforce previous data and logical assumptions that upper Columbia and Snake River chinook are vital for the survival of Southern Resident orcas, and that restoration of abundant runs of those chinook represents an essential opportunity to help this struggling orca clan get through the lean winter months.