NRDC Blog: To Save Orcas, First Save Salmon

Southern Resident orcas face many threats in the Northwest, but giving them more salmon could remedy most of them. 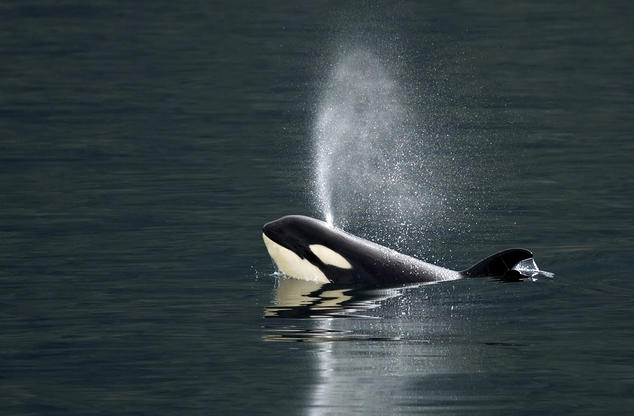 Southern Resident orcas—a group of killer whales that stay close to the Pacific Northwest coast—are slumping toward extinction. There were 86 members when the population was listed as endangered in 2005. After more than a decade of government protection—or what passes as protection—there are 83 left.

Like most endangered animals, these orcas face several threats. Industrial chemicals accumulate in their bodies and inhibit reproduction. Shipping noise <https://www.nrdc.org/stories/turn-down-volume>  frequently drives the whales from their habitat, preventing them from foraging, mating, and raising their young. If these were the orcas’ only problems, they could probably manage. But a dramatic dip in numbers of Chinook salmon, which make up as much as 80 percent of the Southern Residents’ diet, has intensified the impacts of pollution and ocean noise on the orca population’s growth rate. The whales simply won’t be able to recover without more salmon.

But replenishing the Chinook supply in the Pacific Northwest is much easier said than done. Dams, especially along the lower Snake River, make it nearly impossible <https://www.nrdc.org/onearth/whales-dam-problem>  for the fish to complete their normal migration patterns. Climate change exacerbates the challenges of their journey, as the salmon fight to survive in the hot, slow-moving water behind the dams. Not enough wild Chinook are reaching their historical spawning grounds at the higher elevations, where the water remains within the temperature range the fish are adapted to. As a result, the upper Snake River Chinook salmon population is down more than 75 percent compared with their numbers in the pre-dam era.

In early May, a federal judge threw the Southern Residents a lifeline. Judge Michael Simon told the agencies <http://www.seattletimes.com/seattle-news/environment/lower-snake-river-dam-removal-back-on-table/>  that operate dams along the Snake and Columbia Rivers that they have been unjustifiably dismissing the effect their hydroelectric dams have on the salmon. By March 1, 2018, the National Oceanic and Atmospheric Administration (NOAA) must produce a completely new set of conclusions regarding the dams’ environmental impacts. As part of that process, the judge advised that retiring the four lower Snake River dams must at least be considered. He deferred to the government’s determination that the dams do not directly jeopardize Southern Residents. That finding, however, was based on a lone study that many orca scientists consider outdated and an outlier. The connection between the survival of the Pacific Northwest’s resident orcas and the recovery of Columbia and Snake River salmon will be a central subject of the upcoming environmental review. In the meantime, these whales will need continued federal protection.

“We’re gutting the Endangered Species Act <https://www.nrdc.org/stories/10-things-you-didnt-know-about-endangered-species-act>  each time we ignore its mandate to ensure federal projects operate in a way that does not put an entire species at risk of extinction,” says Giulia Good Stefani <https://www.nrdc.org/experts/giulia-cs-good-stefani> , an attorney for NRDC’s Marine Mammal Protection Project. “For decades, the government has been failing Columbia and Snake River salmon and the orcas that depend on them. The science is straightforward—if we lose the fish, we lose the whales.”

You can learn more about how dams and climate change affect the salmon population here <https://www.nrdc.org/onearth/whales-dam-problem> , but it’s the interplay of all these threats—not enough salmon, toxic water, and noise pollution—that provides a fascinating and troubling insight into the shortcomings of the country’s conservation efforts.

Poison in the water
The oldest members of the Southern Residents have been swimming in a toxic cocktail of industrial chemicals for decades. Born when automobiles were first becoming popular, J2, also known as Granny, is the world's oldest known orca, at more than 100 years old. Blubber biopsies and tests on the flesh of deceased orcas reveal significant levels of the pesticide DDT <https://www.epa.gov/ingredients-used-pesticide-products/ddt-brief-history-and-status> , which was banned in the United States 44 years ago <https://www.epa.gov/aboutepa/ddt-ban-takes-effect> . Southern Resident orca blubber also contains PCBs <http://www.atsdr.cdc.gov/toxfaqs/tf.asp?id=140&tid=26> , which the country banned in 1979 <http://www.deq.state.or.us/lq/cu/nwr/PortlandHarbor/docs/SourcePCBs.pdf> . Some of the pollutants found in the whales, though, are still being manufactured, such as a class of flame retardants known as PBDEs <https://en.wikipedia.org/wiki/Polybrominated_diphenyl_ethers> . The accumulation of these and newer chemicals should raise questions about our attention (or lack thereof) to marine mammals when developing chemical regulations.

Studies suggest that industrial chemicals have a direct role in the stalled recovery of Southern Resident orcas. Orca mothers unwittingly use their fetuses as toxin receptacles. We know this by comparing the contaminant load in male and female orcas throughout their lives. Levels of DDT, PBDEs, and PCBs increase in females until they begin to bear calves. When females become pregnant, their chemical levels drop, strongly suggesting that the contaminants tragically pass to the fetus. Male orcas, by contrast, accumulate contaminants steadily throughout their lives, because they don’t give birth.

The offspring continue to take toxins from their mothers even after birth. Most of these chemicals are lipophilic, meaning they concentrate in the animal’s fat. Since orca milk is approximately 70 percent fat, orca babies get sizable doses of PCBs and DDT with every meal.

Infant mortality is high among orcas in any environment. This is what makes pollution especially dangerous for the Southern Residents, who lose more than 50 percent of their calves within their first year. As the population clings to its very existence, healthy offspring are essential to the group’s survival.

Here’s where the salmon come in. Blubber serves as a sort of savings account for killer whales. They draw on these fat stores when food is scarce. If the Southern Resident orcas had enough salmon to eat, the toxins in their blubber wouldn’t be as damaging, because they wouldn’t need to metabolize as much blubber for energy. Mothers wouldn’t need to draw as heavily on their toxin-rich blubber when bearing and nursing their young. But because Chinook salmon have become scarcer and scarcer over the years, the orcas’ own hungry bodies unlock the industrial contamination’s most deleterious effects.

Feel the noise
Ships heading in and out of the ports of Seattle and Vancouver—two of the busiest on the planet—pass right through the Southern Residents’ habitat. Naval exercises involving sonar also take place near these congested waters. Much of the sound from these practices occupies the same frequencies orcas use to communicate. The noise pollution <https://www.nrdc.org/issues/ocean-noise>  blocks their signals about foraging and mating, and it can drown out communication between mother and calf.

When large ships pass through the Southern Residents’ area of the Pacific Northwest, researchers sometimes see the whales swimming with their heads high out of the water in an obvious attempt to get their jaws into the air. Whale jaws are filled with a fatty fluid that transmits sound waves from the water to the inner ear. Swimming in this manner is a whale’s way of covering its ears.
In other parts of the world, whales have been observed fleeing rapidly from military sonar. In the Caribbean, for example, animals that have beached themselves have exhibited punctured inner ears and symptoms of suffering from the bends, caused from too rapid an ascent.

Noise was a potential contributor to the tragic death of the Southern Resident orca known to researchers as L112, or, more affectionately, Victoria (she was also known as Sooke). In February 2012, Victoria was found dead on the Washington coastline, at the tender age of three. The cause of her death remains controversial. NOAA claims that an unidentified blunt force trauma <http://www.westcoast.fisheries.noaa.gov/protected_species/marine_mammals/killer_whale/l112_stranding_final_report.html>  was the primary factor, but some who study the orcas believe that the condition of her brain was consistent with a known impact of noise on whales.
“Neither the United States nor the Canadian navy will admit to the activity that led to her death, but she was killed by an underwater sound,” says Deborah Giles, research director at the Center for Whale Research. “Half of her brain was liquefied.”

As with toxins, lack of salmon intensifies the damage of ocean noise. In dark or murky waters, orcas locate food by using their own sonar to bounce sound waves off of their prey. Noise from shipping and military sonar in the whales’ hunting grounds interferes with those sound waves. The few Chinook salmon that now swim through the orcas’ habitat become increasingly difficult to detect. If Chinook were more plentiful, even orcas “blinded” by noise would have an easier time finding dinner.
The other blackfish

The Southern Resident orcas have been on the Endangered Species List for 11 years. During that time, the only significant protection measure the government has taken is to increase the distance whale-watching ships must keep from the animals. In light of the whales’ struggle against pollution and ocean noise and lack of food, that’s not protection—it’s abdication.