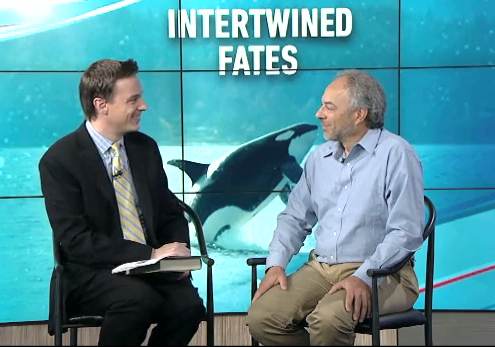 When Dr. Safina visited the Pacific Northwest in early October 2015 to discuss his book "Beyond Words" and present the keynote presentation at the Orca-Salmon Alliance's event at the the Seattle Aquarium - " Intertwined Fates: The Orca-Salmon Connection in the Northwest", he also visited a number of media outlets.

Here is a link to his interview with KOMO-TV on the morning of October 7.  Below is the partial transcript from the interview; Watch the entire interview here.

CAYLE THOMPSON: The orcas we often see in parts of the Puget Sound are very near and dear to us here in the Northwest, so are our salmon populations.

Tonight, for one night only, at the Seattle Aquarium you have a chance to hear from several leading experts in the conservation of the Southern Resident orcas and Chinook salmon. We are very pleased to be joined this morning by author Dr. Carl Safina – welcome.

You will be one of the lecturers this evening, and we should point out SOLD OUT – all the tickets have already for this event.

DR. CARL SAFINA: My mother will be very happy to hear that.

Cayle: (laughs) This is part of the Orca Salmon Alliance. First of all, what is that and what is the rationale behind it?

Carl: It’s a new coalition and a number of conservation groups are coming together, some from the region, some national groups, coming together because we’ve known for a long time that the resident orcas are the fish eating orcas and we’ve know that they mainly eat Chinook salmon but what we are now really realizing is that they are experiencing food shortages that are causing them to not reproduce very well in most years.

They have a baby boom right now but they had no babies for a whole bunch of years. So, when there is a big pulse of salmon they do very well but mostly they are nutritionally stressed and the best thing that we can do, the best single thing we can do is to take out the four earthen dams on the lower Snake River. That would give us about 70% of the recovery potential of the Chinook salmon that they are short of – by taking out those dams. And people have been asking for decades that those dams be removed because they really don’t do very much and they are not the big hydropower dams and they are just sort of a historical mistake I would say.

Cayle: We have followed so much of this in the news as well, including the baby boom that you mentioned which is always exciting to see.

From here the interview moved on to a discussion of his book: full interview here.