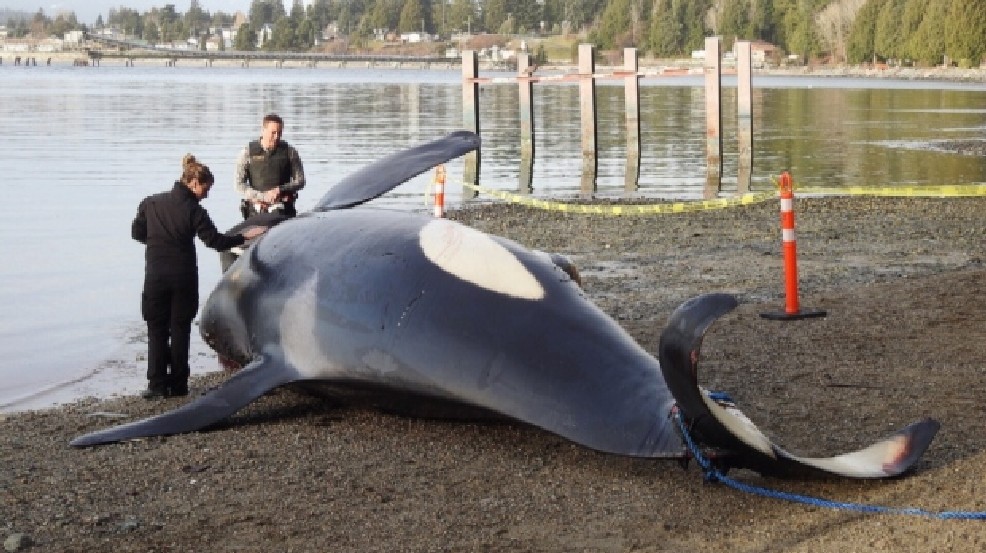 VANCOUVER, B.C. - One of the Puget Sound's endangered southern resident orcas was found dead in Canadian waters this week.

The Canadian Department of Fisheries and Oceans said the 18-year-old male orca, known as J34, was found on Monday floating in the water in the Sunshine Coast area, about 30 miles north of Vancouver.

"He had not yet grown to full size," said Howard Garrett from the Orca Network. "It's just very sad to see him go. He had not reached his full maturity."
The Center for Whale Research said J34 was spotted alive as recently as Dec. 7. Garrett said he was very recognizable member of the pod.

"[He was] the indicator of J-pod because he had a very distinct curve through his dorsal fin and a little notch that you could pick him out," said Garrett. "Once you saw him, you would know that the immediate family was nearby."

Scientists are performing a necropsy on the beach to try and figure out how J34 died. But, Garrett thinks it could have to do with the dwindling salmon population up and down the west coast.
"[The orcas] go through periodic bouts of nutritional deficiency," said Garrett. "There's just not enough of the chinook salmon and the coho chum salmon which are basically all they will eat."
"He was a part of a natural line that has suffered so many losses lately," said Garrett.

The J-pod already lost a mother and a calf back in October. Orca advocates said both showed signs of malnutrition. A member of the L-pod also in April.

"We need to get more fish for these whales, they're not getting enough salmon year round," said Garrett. "Especially in the Columbia watershed due to the dams, especially on the Snake River because that blocks the largest wilderness spawning area on the west coast, so those salmon are severely depleted. That's what these orcas depend on. "

Garrett said scientists have been studying the J,K and L-pods since the mid-70's. The southern resident orcas were listed as endangered in 2005, when there were just 88. Since then they've lost nine, including J34.

"That brings the population down to 79, which is a very low number," said Garrett.
J34's mother, J32 and his brother, J38 are still alive.