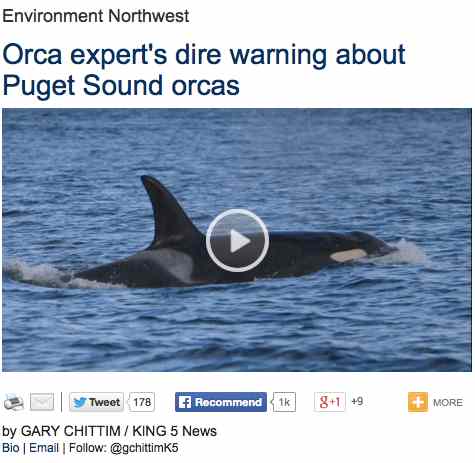 Here is a link to an excellent July 3 news story on KING5 TV - highlighting renowned killer whale expert Ken Balcomb and his most recent efforts to sound the alarm bells re: the critical situation facing the Northwest's endangered Southern Resident Killer Whales (SWKWs).

The orca population is in decline and while the federal agencies have identified a number causes, the severe and persistent lack of available prey - primarily chinook salmon - is, according the Mr. Balcomb, most pressing and important to address quickly.

The Columbia and Snake rivers have historically been an essential source of chinook for these orcas - especially in the lean winter months. NOAA-Fisheries, the federal agency charged with protecting both endangered orcas and endangered salmon has previously identified the historic predation by these orcas on Columbia Basin chinook salmon and have described the decline of salmon in the Columbia River basin as “[p]erhaps the single greatest change in food availability for resident killer whales since the late 1800s...”

Nevertheless, this same federal agency insisted in January on producing an inadequate status quo 2014 Columbia-Snake River Salmon Plan that once again is far more favorable to river industrialists than the endangered salmon populations, and the imperiled orca and struggling fishing businesses and communities that rely on healthy, abundant salmon populations.

Click here to see the story online (you can read the text below). Click here to learn more about the orca-salmon connection and the federal agencies' inadequate 2014 Columbia Basin Salmon Plan here.

SAN JUAN ISLAND, Wash. — One of the world’s most respected Orca researchers is warning we are at the survival crossroads for the Pacific Northwest pods.

The endangered Southern Resident Orcas that frequent Puget Sound are not rebuilding their numbers as hoped.

Ken Balcomb, founder of the Center for Whale Research, is doing what he’s done for 40 years. Photographing and recording the Southern Resident orcas.

“Fortunately every day I spend with whales doesn’t count in the life span,” said Balcomb.

But when the excitement of the chase is over, when he stands on the edge of his peaceful paradise, reality darkens the view of his subjects.

“The animals that are out there that are over 40 years old, there’s a bunch of them swimming around,” said Balcomb.

“It’s been two years since the J, K, and L pods have produced a baby that has survived more than a month.”

“We’ve got less than 20 reproductive age females at present and not many coming up through the ranks.

We can’t have a population without reproduction,” he added.   Balcomb knows these whales better than anyone. He has snapped tens of thousands of frames documenting their births, deaths and lives for 40 years.

Federal agencies have depended heavily on his work for their plan to help the orcas recover.  But when he reads the government’s latest report on that plan, he feels even worse about the orcas’ future.

“I’m disappointed,” he said. “It’s a very glossy summary for the public and Congress to look at how the money was spent.”

Balcomb feels the report wastes time on concepts like pressure from whale watching boats and pollution and misses the key factor in the decline of the killer whales.

“And it’s going to continue to decline until we do something about Chinook salmon stocks throughout their range,” he said.

Unlike other orcas whose numbers are increasing, the Southern Residents are almost exclusive eaters of Chinook salmon.    “We’ve just seeing the continuation of a downhill population trend in Chinook salmon.”

The federal report admits the lack of food is a problem, but concentrates more on controlling the whale watching fleet.

Balcomb would rather see federal agents be more aggressive with salmon restoration than pushing back the whale watching fleet.

He has watched the Southern Resident population drop from 87 to 79 during the time they have been under federal protection.

“When we get to 70, I’m going to stop counting because nobody’s paying attention.”  Until then, he’ll keep searching for what he wants to see most.

“A new baby.”  He keeps searching even during days when the whales are hard to find and harder to photograph.

“There is some good news, a group is heading this way, we’re going to get respectfully close and get a good look at them.

And that’s when something happened, something to give Balcomb and his crew a brief moment of hope.

An amorous young male nicknamed Nigel makes his move on a female.

“In about 17 months from now, we may have another little J baby with an L daddy.”  The orcas are still trying.

“We just have to give them a chance,” said Balcomb. “We’ve still got something here that’s worth saving.”

And Balcomb will keep trying too.