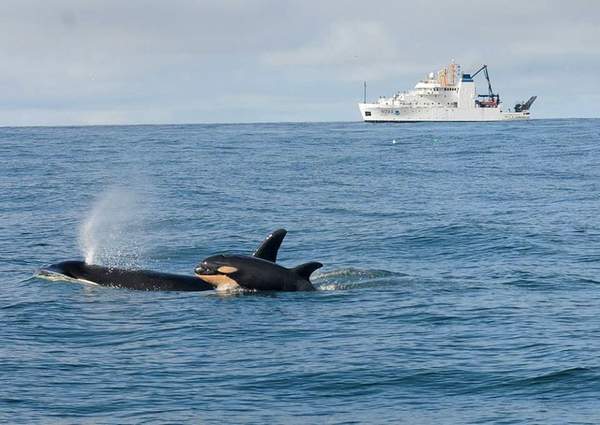 Salmon-loving orcas roamed the Oregon and Washington coasts — to the delight of NOAA researchers who say they have been having great success observing and tracking these relatives of dolphins on the outer coast for the past two weeks.

Most recently, the L pod, as this particular family of orcas is known, were spotted in waters directly off the Long Beach Peninsula Feb. 26, not long after being photographed at the mouth of Grays Harbor earlier that day.

“I keep thinking we have probably used all our luck up but things keep falling into place,” said Brad Hanson, lead researcher on the Southern Resident killer whale survey team. “By yesterday afternoon [Wednesday] we were down to one day’s fuel supply for the Zodiac. The whales have been all over the coasts of Washington and Oregon in the past two weeks but they managed to conveniently be in the vicinity of the entrance to Grays Harbor this morning [Thursday] allowing us to go in and quickly refuel.”

In photos the researchers took later, it is possible to see the calf’s fetal folds, indicating that it is likely only a few days old.

The orcas spent the afternoon foraging off the Long Beach Peninsula, and were observed by NOAA for weeks at various places between Neah Bay and Monterey. In addition to last Thursday, they were tracked in the immediate vicinity of the Long Beach Peninsula on Feb. 19, 20 and 25. They also spent several days off the North Coast of Oregon in the last week of February.

NOAA has been tracking the movements of Puget Sound-based orcas via satellite tags since 2009, finding they often spend extended amounts of time foraging up and down the outer coast in the winter, with the Columbia River’s biologically rich plume being a particular attraction.

But orcas weren’t the only things on the move.

On the horizon, gray whales are cruising by on their way to feeding grounds off the coast of Alaska. Puffs of water and air blown from their blowholes look like plumes of smoke over the water and mark their progress miles offshore.

Earlier in the month, on Feb, 19, there were reports of a possible 18-foot-long great white shark chowing down on harbor seals off the southwest Washington coast. This was determined after the Washington Department of Fish and Wildlife, in consultation with NOAA shark experts, performed a necropsy on a female seal, bitten in half, that had been found on a beach near Ocean Shores, about 20 miles north of the Long Beach Peninsula.

Surfers near Cannon Beach and Seaside in Oregon often encounter sharks of all shapes and sizes. They have reported various sightings and possible sightings in recent weeks.

Meanwhile, in the Columbia River, sea lions continued to take over Astoria’s East Mooring Basin, home to a number of commercial and pleasure boats. One day’s count records approximately 1,700 individual sea lions on the docks.
“Every bit of that amount and certainly more,” said Port of Astoria Executive Director Jim Knight.

Earlier in February, dozens of sea lions at a time could be seen bobbing in the river near the Washington side of the Astoria-Megler Bridge, feasting on runs of fish, possibly a healthy run of smelt. There are so many smelt that substantial number of dead ones are washing up on area shorelines. Like Pacific salmon species, smelt die after spawning. “This is a consequence of a healthy population, or a healthy return,” Jessica Sall, a spokeswoman for the Oregon Department of Fish and Wildlife, said.

At the Astoria marina, the port has had some success keeping docks where tenants are anchored free of the massive sea lions, taping off the docks with construction tape and bright pennant flags. Now Knight says they are thinking about how to slowly regain territory on the docks the sea lions have claimed, perhaps taping off all of those docks or portions.

But success could be complicated.

“If we are successful, they’re going to go somewhere else,” Knight said. He hopes they would go to the jetties, but they could also very well head to other mooring areas.

“That’s the part we just don’t know about,” Knight said.

Birds have also returned in great numbers: Caspian Terns and cormorants, many of them returning to colonies on East Sand Island near Chinook. Pelicans will likely make an appearance soon as well. Last year, they appeared on East Sand Island — a migration stopover for them — earlier than usual, due mostly, researchers reasoned, because of lack of food farther south. But the large birds have also been staying north longer than usual and have even been observed nesting on the island — an expansion of their breeding range that researchers on the island believe could be due to climate change.