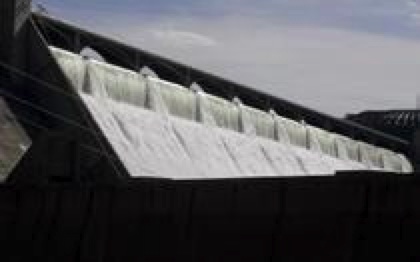 Salmon runs to the Upper Columbia River and its tributaries went extinct in the 1930s when Grand Coulee Dam was built without fish ladders. Now it’s time to investigate salmon passage over the 550-foot-high dam, including the possibility of restoring runs up the 1,200-mile river system and into British Columbia, according to a draft recommendation from federal agencies, Northwest states and 16 Indian tribes.

The draft recommendation is part of a regional review of the 1964 Columbia River Treaty, which is up for renegotiation beginning next year. Located 90 miles west of Spokane, Grand Coulee was built to provide cheap power and irrigation during the Great Depression. The reservoir behind the dam flooded Kettle Falls, eliminating what was once one of the nation’s most prolific salmon fisheries.

For decades, Northwest tribes, First Nations in Canada and even sport fishing groups have dreamed of restoring salmon runs above Grand Coulee. “That’s been a goal ever since the dam was built,” said Michael Finley, chairman of the Confederated Tribes of the Colville Reservation, whose ancestors fished at Kettle Falls. “My grandparents and my parents have talked about it as long as I can remember.”

During the 1930s, engineers considered building a flume and an elevator to collect salmon and transport them over the Grand Coulee, but they determined that the dam was too tall. Trapping adults below the dam and hauling them upstream was rejected as too costly. Hatcheries eventually were built to help compensate for the loss of the runs.

With the Columbia River Treaty up for review, the opportunity for a serious re-examination of fish passage over Grand Coulee emerged. Written before most federal environmental laws took effect, the U.S.-Canadian treaty is narrowly focused on hydropower and flood control. Federal agencies, the tribes and Northwest states favor amending the treaty to address ecosystem functions, such as salmon and climate change, in addition to electric generation, water storage, transportation and recreation.

The United States and Canada should share the cost of engineering studies to evaluate and possibly construct fish ladders over Grand Coulee and Chief Joseph Dam, a downstream dam that also blocks fish passage, according to the draft recommendation released last week.

If fish passage can be achieved, both nations should also share the cost of re-establishing salmon runs above the dams, the recommendation said. Public comment on the draft recommendation will be accepted through Oct. 25, said Mike Hansen, a spokesman for the Bonneville Power Administration. In mid-December, the treaty recommendation will be sent to the U.S. State Department, which will decide whether renegotiating the treaty is in the national interest.

She represents charter boats, fishing guides and others in the region’s $3 billion sport fishing industry.
The summer chinook runs that once migrated through Washington en route to British Columbia were the stuff of legend. Called “June hogs,” they weighed as much as 80 pounds, said Hamilton, who keeps a picture of a man standing next to a summer chinook in her office.

She said the Northwest can be proud of its hydropower system while acknowledging that mistakes made during its development need to be fixed. The destroyed salmon fishery at Kettle Falls was “like Wall Street” in terms of its economic importance to American Indians, said Hamilton.