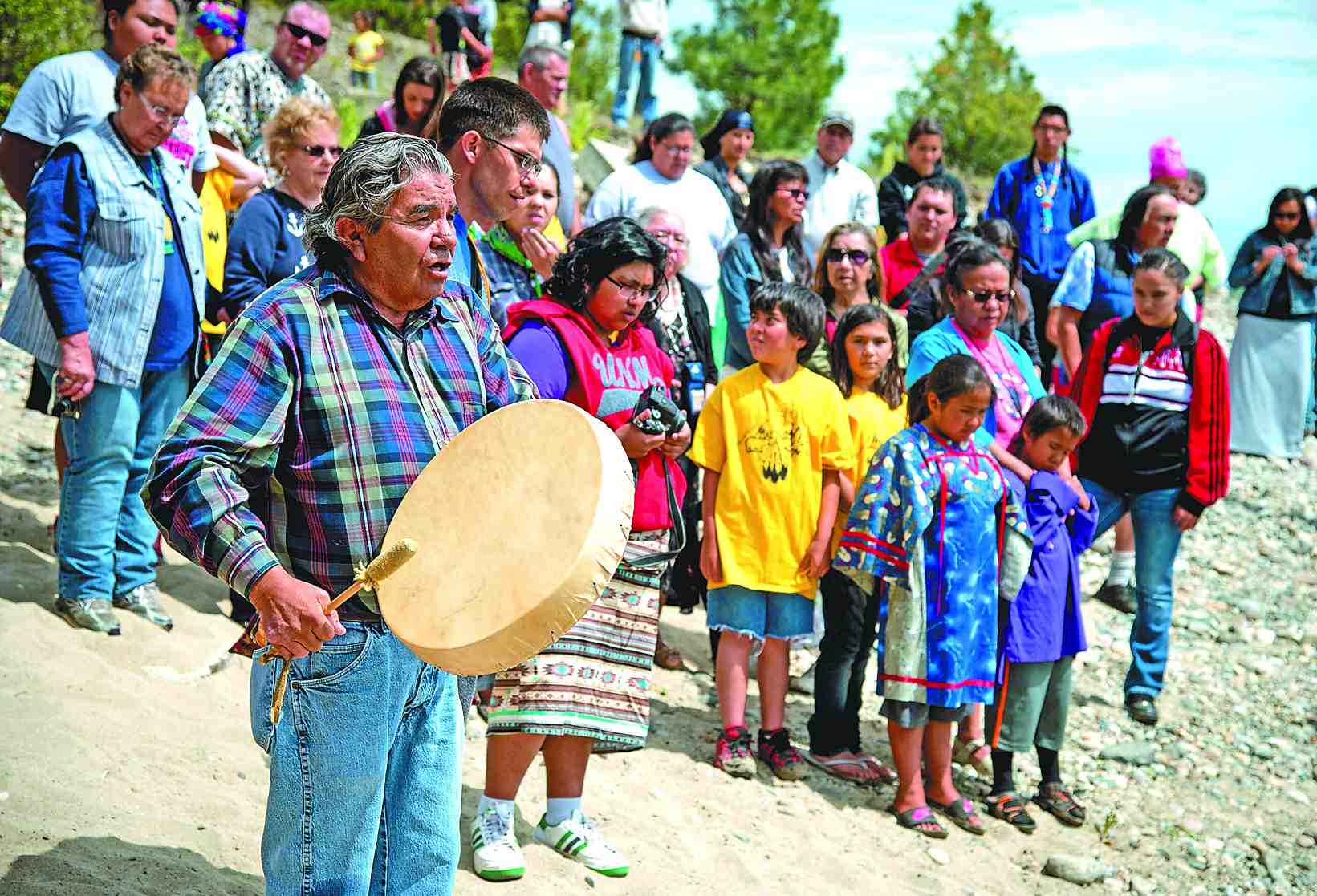 Becky Kramer, July 27, 2014 Tribal fishermen work along the Columbia River near Kettle Falls in this photo taken about 1900. Salmon have long been part of the culture, spirituality and diet for tribes along the river.

KETTLE FALLS, Washington – Richard Armstrong knelt on the Columbia River’s rocky shoreline, a feather in his hand, a prayer for salmon in his heart.

For thousands of years, his ancestors fished at this site. Perched on platforms above the thundering cascades at Kettle Falls, they took hundreds – sometimes thousands – of fish daily from the river: blueback sockeye salmon, silvery steelhead, 40- to 60-pound spring chinooks called “June hogs” and eel-like lampreys.

When Grand Coulee Dam was built in the 1930s without fish ladders, the last of the once-storied salmon runs that extended into Canada ceased. But U.S. tribes and Canada’s First Nations never gave up their dream of getting the salmon back to the Columbia River’s headwaters, a 1,200-mile journey from the ocean.

Now, those dreams are taking focus. With the 50-year-old Columbia River Treaty up for review, tribes and First Nations are pushing for salmon restoration above Grand Coulee. The 1964 treaty governs U.S.-Canadian operation of the river for flood control and power generation.

In a recommendation to the U.S. State Department last December, the Bonneville Power Administration and the U.S. Army Corps of Engineers suggested that the two countries share the cost of investigating what it would take to get salmon back to Canadian spawning grounds.

Tribes and First Nations hope to see the design work for pilot studies begin as early as next year.

“There really is no need to wait,” said Stephen Smith, an Oregon fisheries consultant for the Upper Columbia United Tribes, which represents the Colville, Spokane, Coeur d’Alene, Kalispel and Kootenai tribes. “The technology is there; the interest and demand is there; and the legal arguments are there.”

Two or three generations have passed since tribal members caught and speared salmon at Kettle Falls. “These are people who’ve been blocked from salmon all their lives,” Smith said. “Their culture is slipping away. There’s an urgency to get the salmon back.”

In addition to restoring the identity of the tribes and First Nations as “Salmon People,” getting fish to Canada would help preserve a Northwest icon.

Reconnecting salmon to cold-water habitat in the Columbia’s upper reaches will help the species’ survival as the climate warms, scientists say. Salmon evolved with spring snowmelt, and in the Northwest, only British Columbia’s mountains will reliably provide those snowpacks within 60 years, according to modeling by the University of Washington’s Climate Impacts Group.

Amid the policy and political discussions, Armstrong, a 68-year-old elder from Penticton, British Columbia, and others recently offered prayers for the salmon’s return.

About 90 people gathered on the riverbank at Kettle Falls on a June morning, where Armstrong led a “calling the salmon back” ceremony. Behind him, the river was a vast slack water, the falls – known as “noisy waters” to local tribes – submerged by Grand Coulee Dam’s reservoir.

As part of the ritual, Armstrong told people to pick up two polished river rocks, clacking them together to replicate the tumbling of rocks on the river’s bottom.

“That’s the sound the salmon hears,” said Armstrong, a member of Canada’s Okanagan Nation Alliance and a descendant of one of the last salmon chiefs at Kettle Falls. The chiefs oversaw the harvest, including the distribution of fish.

At the end of the ceremony, the rocks were flung into the river, carrying prayers for the salmon. Armstrong later repeated the ceremony at three former fishing spots in British Columbia.

“There’s hope all the time that the salmon will be back,” said Armstrong’s sister, Jeannette Armstrong. “That’s what we’re praying for.”

‘Our ancestors depended on salmon’
Grand Coulee Dam rises fortress-like from the Columbia River about 90 miles northwest of Spokane, an engineering marvel of the Great Depression.

Lake Roosevelt, the reservoir behind the 550-foot-tall dam, provides irrigation water for Eastern Washington farms and helps protect Portland from flooding. Grand Coulee Dam is also the largest hydroelectric power producer in the United States. It was finished just in time to support World War II efforts, supplying electricity for Northwest factories and plutonium production at the Hanford Nuclear Reservation.

But the story of how Grand Coulee was built without fish ladders remains a source of bitterness for tribes and First Nations. As the dam’s original design grew taller, engineers realized it would be difficult to incorporate the flume and elevator they had devised for fish passage. Plans for the structures were scrapped.

Tribes weren’t consulted about the loss of the 10,000-year-old fishery at Kettle Falls, said John Sirois, a council member for the Confederated Tribes of the Colville Reservation.

“Our ancestors depended on salmon for so long. That right was taken away from them because of a national security need without consultation and without their consent,” Sirois said.

In 1934, in response to a formal U.S. inquiry, Canada’s Department of Fisheries expressed a similar indifference to the effect of the salmon’s loss on First Nations.

“The assumption that there is no commercial salmon fishery on the Columbia River in Canada is correct, and hence Canadian interests in that respect will not be affected if the dam at Grand Coulee is not equipped with fishway facilities,” the department’s deputy minister wrote at that time.

“We simply didn’t have a voice when all the decision-making was occurring,” said Kathryn Teneese, chairwoman for the 2,000-member Ktunaxa Nation in British Columbia, whose ancestral fishing grounds extended to the river’s headwaters at Columbia Lake. “The position of the Canadian government was that nobody would be affected. That speaks volumes to us: Does it mean we are nobody?”

In stories from the tribes, the Creator asked the animals what they could do to help the people. The salmon stepped forward and said, “The people can eat my body.” Each spring, First Salmon ceremonies celebrated the return of the runs.

“We’re the caretakers of those songs that welcome the salmon back up the river,” Sirois said.

Journals of trappers, explorers and missionaries describe salmon returns of astounding abundance. On some days, the catch at Kettle Falls exceeded 1,000 fish, and on the lower Spokane River, thousands of salmon were laid out on drying racks, according to the accounts.

Artist Paul Kane visited Kettle Falls in 1847, sketching Indian fishermen at work. He wrote about the 2-month-long salmon migration: “… there is a continuous wave of them, more resembling a flock of birds than anything else in their extraordinary leap up the falls.”

Up to 50 percent of the calories in local tribes’ diets came from fresh, smoked and dried salmon, said Al Scholz, an Eastern Washington University professor who has researched historical accounts of the salmon fisheries.

By the time Grand Coulee Dam was built, salmon returns to the Upper Columbia were a fraction of their historic levels, diminished by over-harvest on the lower river and irrigation diversion dams. But salmon remained an important part of subsistence diets until 1938, when they no longer showed up at the face of Grand Coulee Dam, searching for upstream passage.

After Grand Coulee’s construction, hatcheries were built to stock nonmigratory kokanee and rainbow trout in the new reservoir and augment salmon runs on the remaining, unblocked tributaries. But those efforts never matched the wild runs for abundance.

In 1994, the Colvilles reached a settlement with the U.S. government over the dam’s use of submerged tribal land for power generation. However, the settlement didn’t address the loss of the salmon, said Chaitna Sinha, a staff attorney for the tribe.

The Spokane Tribe has yet to reach a settlement with the government, and Canada’s First Nations have not been able to sue for damages caused by Grand Coulee because they lack legal standing in the U.S. court system.

By restoring those runs, “future generations would be made whole again,” Teneese said.

‘Gulpers’ a breakthrough
What would it take to get salmon back above Grand Coulee? Scientists on both sides of the border have looked into that question.

Canada represents about 20 percent of the Columbia River watershed, with more than 1,100 miles of potential spawning habitat in the river’s main stem and its tributaries. But Grand Coulee is no longer the only dam blocking access to that habitat.

Advances in trapping and hauling, however, could get salmon around the dams without building costly fish passage structures.

“Gulpers,” also known as floating surface collectors, are one of the breakthroughs of the past decade, said Smith, the Oregon fisheries consultant. Powerful pumps in the collectors create a flow that attracts fish. They’ve been successful at gathering up young salmon in reservoirs so they can be trucked around the dams and released downriver.

Because they float on the surface, the collectors are compatible with changing river elevations, and they don’t interfere with power generation or flood control operations, Smith said.

The technology breakthroughs are driven by policy changes. As U.S. dams come up for relicensing, the Federal Energy Regulatory Commission has begun requiring fish passage where it was blocked in past decades. Canada is experiencing similar policy shifts. When new powerhouses were added to three Canadian dams, the dam operators agreed to provide future fish passage should the salmon ever be reintroduced above Grand Coulee.

With that work quietly happening in the background, U.S. tribes and First Nations have seized on renegotiation of the Columbia River Treaty to push for salmon restoration in the upper watershed.

Northwest tribes worked on a regional recommendation for modernizing the treaty with the BPA, the Army Corps of Engineers and state and federal agencies. The recommendation included investigating the return of salmon to Canada.

Now, the region is awaiting a response from the U.S. State Department, which will make the ultimate decision on whether to renegotiate the treaty and what issues to address.

In the Northwest, however, funding for studies already is starting to take shape. Pilot studies on the cost and feasibility of fish passage above Grand Coulee were included in the Northwest Power and Conservation Council’s draft 2015 fish and wildlife plan. The plan guides how the BPA spends mitigation money for rebuilding fish and wildlife populations affected by dams.

Sockeye run a model
This year’s record sockeye run on the Columbia River demonstrates what restored access to habitat above Grand Coulee could bring, supporters of the effort said.

More than 574,000 sockeye returned to the Columbia River this summer, the highest number since record-keeping began at Bonneville Dam in 1938.

Most of those sockeye spawned in southern British Columbia in the Okanagan River’s watershed, passing over nine dams to get to and from the ocean. Efforts to rebuild that run involved the Colville Tribes, Okanagan Nation Alliance and dam operators.

“It’s a model of what can be done,” said Randy Friedlander, the Colville Tribe’s fish and wildlife director.

By restoring salmon above Grand Coulee, “we think that we’ll be able to produce a lot of salmon to go up and down the Columbia for the benefit of all communities,” said Smith, the Oregon fisheries consultant.

In the decades to come, most of Oregon, Washington and Idaho’s Snake River Basin will lose snowpacks as a result of climate change, putting salmon at risk from warmer water and lower flows, Smith said. That increases the importance of getting the fish back to snowier British Columbia.

“We have to provide a future for salmon in the Columbia Basin. It may be that the upper reaches of the Columbia could provide that stronghold,” said Bill Green, director of the Canadian Columbia River Inter-Tribal Fisheries Commission.

At Kettle Falls, the “calling the salmon back” ceremony concluded with a community meal featuring barbecued salmon from a hatchery three hours away.

But someday, the salmon could be from Kettle Falls, revitalizing a fishery that now exists only in historic photographs.

“I can actually see it on the horizon,” said Allen Hammond, 57, who grew up listening to his grandparents tell stories about fishing at Kettle Falls. “The fish are coming. It may not be in my lifetime, but it’s coming.”