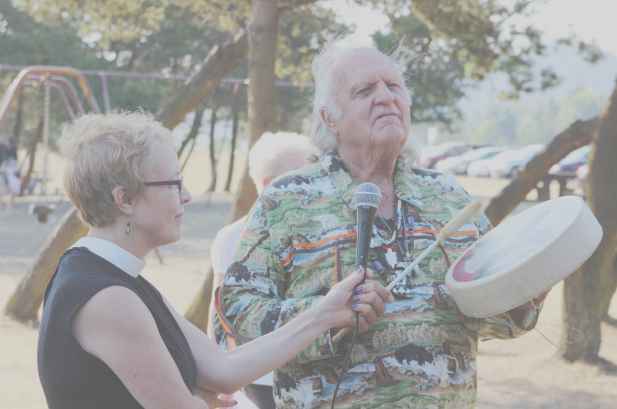 Rev. Kathleen Patton of St. Stephen’s Episcopal Church in Longview helps Roy Rochon Wilson, honorary chief and spiritual leader for the Cowlitz Tribe, as he sings and drums Sunday at a prayer vigil for the Columbia River.

YAKIMA, Wash. — A U.S.-Canada treaty that governs operations of the fourth-largest river in North America — affecting everything from power pr… Read more
The Columbia River is more than an economic engine — it’s a symbol of life.

More than 100 residents from across the county joined with members of the Cowlitz Tribe at Willow Grove Park on Sunday evening to share that message and pray for the health of the river.

The ceremony is part of a weeklong series of events throughout the region to spotlight the effort to bring salmon upstream of Grand Coulee Dam.

The Longview event opened with a traditional canoe ceremony, and the evening featured spiritual leader and Honorary Chief Roy Rochon Wilson, along with ministers and pastors from local churches and a potluck salmon dinner.

“The water flowing by is like the events of today. But there’s water up there that hasn’t gotten here yet. That’s tomorrow’s events.

What’s going to happen when it flows through my life,” Wilson said.

“It will make an impact on the generations to come,” Wilson said.
Woodland resident Tanna Engdahl, also one of the tribe’s spiritual leaders, said she and others came to the vigil because of her concerns about ongoing negotiations about the Columbia River between the United States and Canada.

“We came to pray to remind negotiators for the U.S. and Canada that it’s not all about profit and economic benefit,” Engdahl said.

When Grand Coulee was built in the 1930s without fish ladders, salmon runs extending into Canada ceased. Ever since, U.S. tribes and Canada’s First Nations have lobbied to get the salmon back.

Now may be their chance.

With the 50-year-old Columbia River Treaty up for review, native peoples from both sides of the border are pushing for salmon restoration above Grand Coulee. The 1964 treaty oversees U.S.-Canadian operation of the river for flood control and power generation.

In a recommendation to the U.S. State Department last December, the Bonneville Power Administration and the U.S. Army Corps of Engineers suggested that the two countries share the cost of investigating what it would take to get salmon back to Canadian spawning grounds.

Tribes and First Nations hope to see the design work for pilot studies begin as early as next year.

“The river provides so much: lifestyle, recreation, transportation ... but it also creates life,” Engdahl said.

Engdahl said returning salmon to Canadian spawning grounds means a bountiful flow for the river, which will in turn support marine life along the entire river system.

Wilson said the river is a symbol of life itself, and without a healthy river we can’t have a healthy life.

“I think we should pray and really think about the people above the Grand Coulee Dam, the Spokane tribe, the Colville tribe and all the other people living up there,” said Adam Wicks-Arschak, who works for Voyages of Rediscovery, an environmental education program on the Columbia.

Wicks-Arschak, who lives in New York, spent the last six years traveling the length of the river making his way from the ocean to the river’s source advocating to make it possible for spawning salmon to return to Canada.

The group has been holding prayer vigils this week along the path of the river. Earlier in the day, they held a vigil in Astoria. They will next work their way down to Portland and then Hood River.

“This is one river, and we’re all in it together,” Wicks-Arshck said.