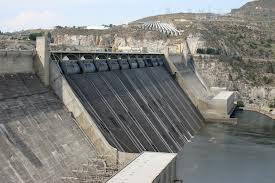 Note on historic runs: The Upper Columbia River was once home to prolific salmon and steelhead runs, with some fish traveling 1,300 miles to spawn in the river’s headwaters. The annual harvest from the Upper Columbia once numbered between 980,000 and 1.6 million fish. Northwest tribes and their Canadian counterparts are meeting in Spokane this week to discuss engineering solutions for getting salmon over Grand Coulee Dam.

Returning chinook, sockeye and steelhead to the upper Columbia River is a long-standing dream for indigenous people on both sides of the border. When the 550-foot-tall dam began operation in 1942 without fish ladders, it cut off access to hundreds of miles of upstream habitat, delivering the final blow to a fishery already weakened by overharvest on the lower river.

“We all know that our biggest challenge is Grand Coulee, because it’s such a big dam,” said Paul Lumley, executive director of the Columbia River Inter-Tribal Fish Commission in Portland.

But it’s a worthy challenge, Lumley told 120 people gathered for the three-day technical workshop at Northern Quest Casino in Airway Heights, which kicked off Tuesday.

“I certainly hope to see (the salmon return) in my lifetime,” he said. “It’s not just about tribal culture, it’s for all citizens of the Columbia Basin. We all care about the fish.”

Renegotiation of the 1964 Columbia River Treaty between the U.S. and Canada created the opening for discussing fish passage over Grand Coulee. Federal agencies, Northwest states and 16 Indian tribes favor amending the treaty to address ecosystem functions, such as salmon and climate change.

The treaty, which governs flood control and hydropower generation on the Columbia, is up for possible renegotiation beginning this fall.

The tribes and Canada’s First Nations are pushing for fish passage at Grand Coulee and Chief Joseph dams on the Columbia, and at three Canadian dams: Hugh Keenleyside, Brilliant and Waneta.

They favor pilot-scale reintroductions of fish and said identifying funding for the work should be discussed by the U.S. and Canada during treaty negotiations.

Innovative engineering for getting salmon over high dams is already occurring in smaller watersheds in the basin, said D.R. Michel, executive director for the Upper Columbia United Tribes. Tuesday’s session featured discussions of trapping and transporting fish around dams, as well as methods for getting them safely through dams. Speakers also discussed where good salmon habitat remains upstream of Grand Coulee. With the climate projected to warm, returning salmon to historical spawning grounds in British Columbia becomes critical, said Bill Green, director of the Canadian Columbia River Inter-Tribal Fisheries Commission.

Under climate change modeling, precipitation becomes more uncertain and stream temperatures are expected to warm, Green said. But British Columbia will continue to have glacier-fed streams that will provide cold water for spawning, he said.

The Upper Columbia River was once home to prolific salmon and steelhead runs, with some fish traveling 1,300 miles to spawn in the river’s headwaters. The annual harvest from the Upper Columbia once numbered between 980,000 and 1.6 million fish, said Sheri Sears, a policy analyst for the Confederated Tribes of the Colville Reservation. Salmon was a daily part of tribal members’ diets and integral to culture and religion.

“Without an opportunity to catch salmon, tradition skills and knowledge associated with the harvest, preparation, and use of the fish … is being lost,” the tribes and First Nations wrote in a recent policy paper. The potential for restoring salmon over Grand Coulee also raises the possibility of salmon returning to the Spokane River, said Matt Wynne, a Spokane tribal council member.

The Spokanes once trapped salmon at Little Falls by building rock barriers partway across the river and spearing fish caught in weirs. They also fished at the Spokane River’s confluence with the Little Spokane and Latah Creek. However, three dams owned by Avista Utilities blocked fish passage on the lower Spokane River even before Grand Coulee was built.

The tribe is starting to analyze what it would take to restore salmon to the Spokane River system, Wynne said. The Little Spokane River in particular still has good habitat, he said.