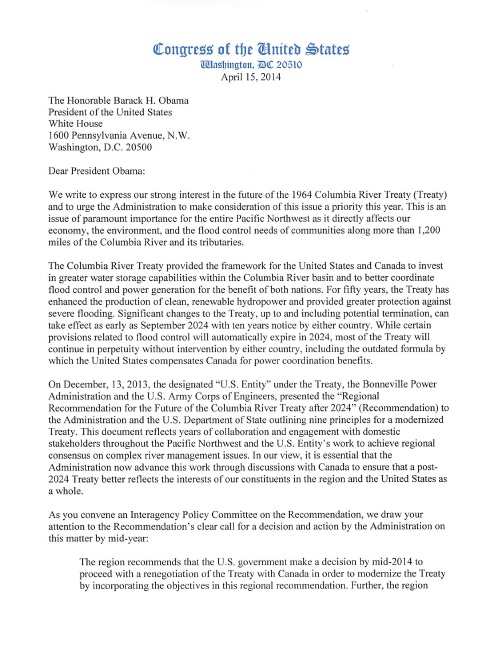 We’re not sure if this has ever happened before: all 26 members of the Northwest congressional delegation – from all four states, both chambers of Congress, and both sides of the aisle – signed a letter to President Obama last month, urging timely action on the United States’ efforts to renegotiate the Columbia River Treaty with Canada. The letter underscores the need for the State Department’s active engagement on Treaty negotiations within the next few months in order to ensure that the Northwest’s Regional Recommendation for Treaty modernization can move forward in 2015:

“In our view, it is essential that the Administration now advance this work through discussions with Canada to ensure that a post-2024 Treaty better reflects the interests of our constituents in the region and in the United States as a whole….We agree that it is critical that this process move forward in a timely fashion in order to best position the United States for a positive outcome in future discussions with Canada.”

While the delegation’s letter is silent on specific aspects of the Regional Recommendation – such as the need to consider ecosystem function as part of the Treaty’s purposes – its call for timely action on Treaty renegotiation is great news for the Northwest and all who care about modernizing this 50-year-old framework so that it provides the benefits and protections that the Columbia Basin needs in the 21st Century.

With the entire Northwest delegation on board, we sure hope the Obama Administration is listening.

You can read the full letter here.