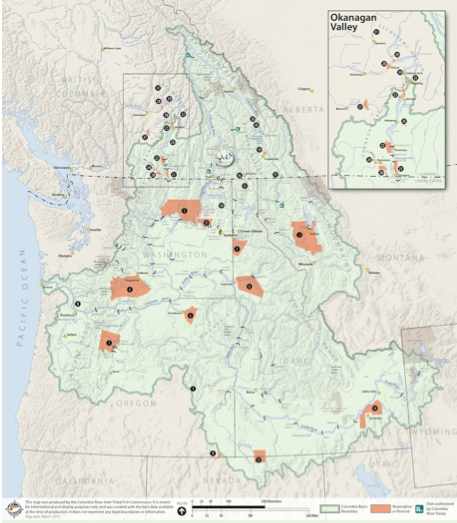 For 16 consecutive days in August, tribal members, environmental activists and others gathered along the banks of the Columbia River, each day a different group at a different location, working upstream from the river's mouth at the Oregon-Washington border to its headwaters in British Columbia, Canada. The progression followed the route of the 1,200-mile-long river’s once-prolific and now decimated salmon runs, on what has become one of the world’s most industrialized waterways.

The demonstrators aimed to draw attention to the river’s plight and to a seemingly minor but actually monumental legal fact: Sept. 16 marked the first time the U.S. or Canada could terminate, with a 10-year notice, the 1964 Columbia River Treaty — the bedrock law that coordinates operation of 14 dams on the river, plus many more on its tributaries. That possibility has triggered a flurry of action as both countries position to renegotiate the treaty, proposing changes that could dramatically re-shape the river's future.

Paul Lumley, a citizen of the Yakama Nation and director of the Columbia River Inter-Tribal Fish Commission, a tribal agency representing four tribes in river-management issues, is one of many who see a new treaty as a tool for reversing decades of environmental abuse. "It's probably the best opportunity in our lifetimes to affect how the Columbia River is managed," he says, especially when it comes to salmon.

The treaty originated in the aftermath of major flooding in 1948, when heavy rain on a thick winter snowpack churned the Columbia into a monster that wiped out Vanport, Oregon, leaving 18,000 homeless. In response, the U.S. and Canada stepped up efforts to tame the transboundary river. The treaty authorized construction of three major dams in British Columbia — which the U.S. helped pay for — as well as the Libby Dam in Montana on the Kootenai River, a major tributary. The agreement also established a framework for sharing the flood-control and hydropower benefits from those dams and others.

And by those measures, the treaty has succeeded: The Columbia Basin dams, operated in careful coordination by the two countries, have prevented flooding and given the region reliable and cheap electricity. But 15 Columbia Basin tribes have another view, stating with rare consensus in 2010 that the treaty has "degraded rivers … natural resources, and tribal customs and identities." Dozens of the Columbia's salmon and steelhead stocks have gone extinct, and 13 remain listed as threatened or endangered. Much of that collapse occurred before the treaty, the result of over-fishing and the construction of dams like Grand Coulee and Chief Joseph, which lack fish ladders and block salmon from reaching the Upper Columbia Basin. But the treaty added additional dams without fish passage, and the 1960s negotiations, adding insult to injury, completely excluded the tribes.

So in 2010, the tribes demanded to be included in any treaty talks brought on by the 2014 trigger. The Army Corps of Engineers and the region's federal electric distributor, the Bonneville Power Administration — which together represent the U.S. in the treaty — received input from the tribes, as well as from states and federal agencies, and crafted a proposal for treaty changes. Last year, they submitted the proposal to the U.S. State Department, which is responsible for advising the president on treaty matters.

The proposal’s most striking feature — largely bearing the fingerprint of the tribes — is "ecosystem function" as a third major treaty tenet alongside flood control and hydropower. That could provide legal justification for changing dam operations, including timing reservoir releases to enhance fish health and creating an adaptive plan to deal with climate change. "The leadership by the tribes has really been extraordinary," says Rachael Osborn, director of the Washington-based Center for Environmental Law and Policy, which helped to organize the August riverside gatherings. "They have put a vision out there."

The focus of that vision involves restoring salmon to their native Canadian spawning grounds. For decades, that has seemed a daunting, even insurmountable task. Now, a growing coalition of tribes, religious leaders and conservation groups see "ecosystem function" as the needed lever. In a declaration sent Sept. 23 to President Barack Obama and Canadian Prime Minister Stephen Harper, many religious leaders — including the Catholic archdioceses of Portland and Seattle — plus representatives of nearly all the Columbia Basin tribes and First Nations, called for modernizing the treaty to restore salmon and other fish "to all historical locations throughout the Columbia River basin."

The actual proposal, however, is more cautious. It would only direct the U.S. and Canada to "investigate" and possibly implement an incremental plan for restoring salmon to the upper basin. That's earned support from over 80 of the region's utilities, which chafe at the prospect of increasing the cost of hydropower. (The region's utility ratepayers, along with American taxpayers, already spend nearly $1 billion annually on fish recovery.) But that compromise hints at cracks between the stakeholders that could widen into bigger rifts. 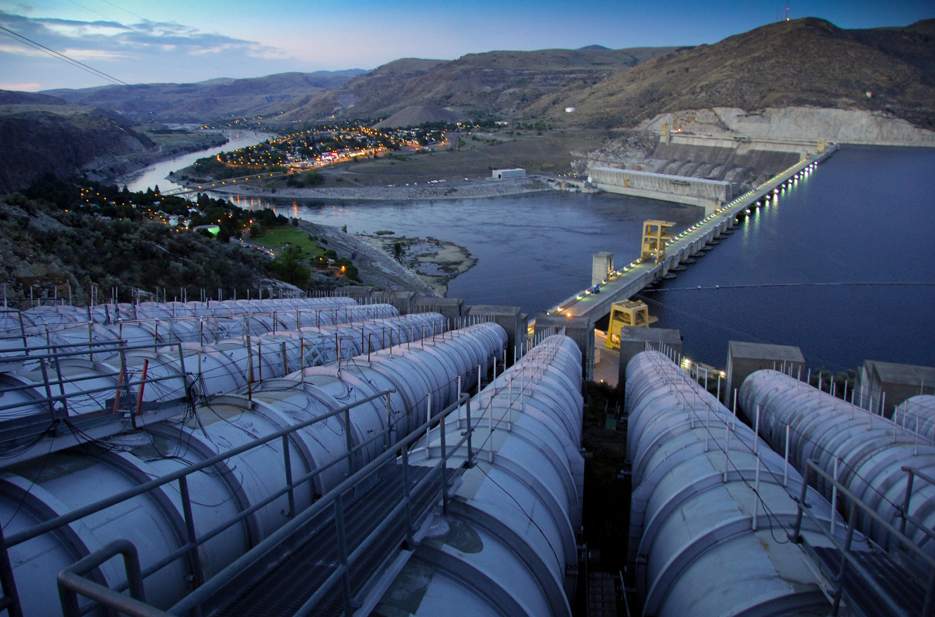 The utilities' money concerns could indeed prove a major sticking point, potentially overshadowing the enthusiasm for "ecosystem function." In addition to funding salmon recovery, U.S. utilities give British Columbia nearly $300 million in hydropower each year in return for reliable flows from the Canadian dams. The U.S. utilities think this so-called "Canadian Entitlement" is worth significantly less, while British Columbia, which holds treaty authority on the Canadian side, wants to preserve or increase the amount.

And British Columbia has considerable weight behind it: Under the existing treaty, the province's obligation to provide guaranteed flood control to the U.S. expires in 2024. If that were to happen, the U.S. would have to steeply draw down its reservoirs ahead of spring runoff, further stressing salmon as well as hydropower, irrigation and other river uses. Climate change would increase stress with earlier runoff and drier summers, potentially throwing river management into disarray.

British Columbia has indicated its willingness to extend the flood control agreement. But despite First Nations and other Canadian locals’ demand for something like "ecosystem function," the province opposes sweeping changes, such as leveraging the treaty for upper-basin fish passage. That's led to a general sense among stakeholders that the U.S. — which is calling for sweeping changes — will be the one to open talks.

Hence the fragile consensus in the U.S. among the tribes, utilities, federal agencies, state governments and others who support the 2013 proposal — a display of broad support intended to prod the Obama administration into action. All 26 congressional delegates from the Northwest states have urged the State Department to act on the proposal no later than 2015, calling the treaty "an issue of paramount importance for the entire Pacific Northwest." The State Department, considering its options behind closed doors, has given no indication of when it might open treaty talks.

If, and almost certainly, when, those talks occur, it will become apparent how durable the U.S. consensus is — and whether a new Columbia River Treaty can truly reshape the mighty river's future. Until then, "we have to support each other," says Lumley, referring to the diverse set of stakeholders behind the proposal. "If we don't, then the whole thing could unravel."

Marshall Swearingen is a contributor to High Country News. He writes from Bozeman, Montana.