For Immediate Release: Conservation, fishing and faith communities call for U.S and Canadian government collaboration as essential to modernize the Columbia River Treaty 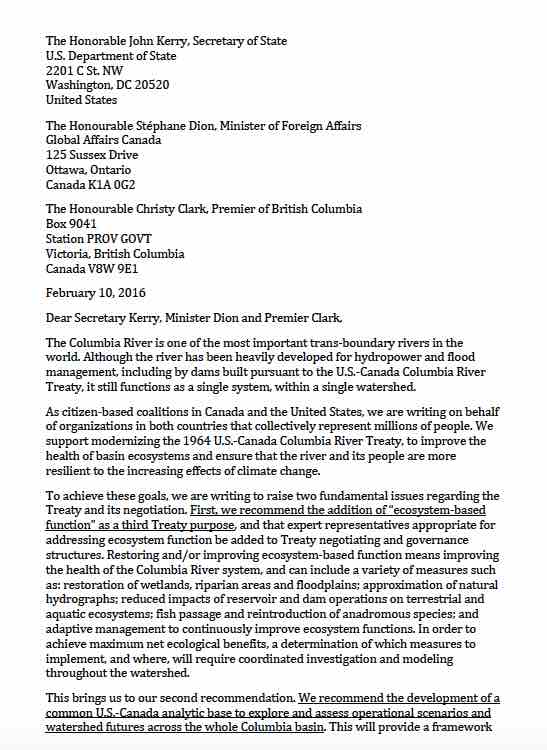 Conservation, fishing and faith communities call for U.S and Canadian government collaboration as an essential step towards modernizing the Columbia River Treaty to protect the environmental values of this important trans-boundary river.

Fifty-one organizations and associations from the Northwest region of the United States and Canadian province of British Columbia sent a letter today to top policymakers on both sides of the border urging them to jointly develop and share critical information as an essential step to protecting and restoring the Columbia River and its watershed in advance of negotiations to modernize the 52-year old U.S.-Canada Columbia River Treaty.

Signers of this letter include leaders from conservation, commercial and recreational fishing, and faith communities. They represent millions of people in both countries. The letter is addressed to Canada’s Minister of Foreign Affairs Stephane Dion; United States Secretary of State John Kerry; and British Columbia’s Premier Christy Clark.

A copy of the letter can be downloaded here.

“Modernizing the Columbia River Treaty to meet the challenges of the 21st Century must focus on protecting and restoring the health of this important river and its watershed,” said Martin Carver of Nelson, British Columbia. Mr. Carver is among the non-governmental leaders in Canada working with those in the United States to broaden the Treaty’s current scope to include a new purpose that prioritizes the protection and restoration of the Columbia River.

The scope of the original Treaty of 1964 was limited to just two purposes: coordinated power production and flood management.. The impending negotiations provide an opportunity to elevate the ecological needs of the river and address the mounting impacts of climate change.

“The organizations signing this letter represent millions of people who understand that the health of the Columbia River and the interests of communities in both nations will be best served by Treaty negotiations based on collaboration rather than competition,” stated Joseph Bogaard, executive director of the Save Our wild Salmon Coalition. “Though the Columbia River might span two countries, it is one river within its own watershed. Our two nations need to work together to manage and protect it as a single system.”

The letter states that the greatest ecological benefit will be achieved “if all stakeholders can access and use a common analytic base. The modeling process should be transparent and informed by our combined best available science.”

The coordinated development and sharing of information between the two countries has occurred before. The U.S. and Canada created an international board prior to the original Treaty negotiations to produce common technical analyses and evaluations for both nations. The letter urges policymakers in both countries to “examine this precedent for a common analytic base, and [to] update and expand it with modern tools, collaboration, and transparency.”

“The health of the Columbia River’s ecosystem was compromised from over-development in the last century and now climate change in this one,” said Greg Haller, conservation director for Pacific Rivers. “A modernized Treaty must protect and restore the health of the river, its fish and wildlife and help ensure that its communities are more resilient to the intensifying effects of climate change,”

The letter cites the restoration of wetlands and floodplains, minimizing the impact of dam operations on terrestrial and aquatic ecosystems, and the reintroduction of salmon into Canada as examples of what’s needed to improve the ecology of the river. “The Canadian portion of the river was heavily impacted by the construction of dams pursuant to the 1964 Treaty” said Bob Peart, executive director of the Sierra Club of BC.  “Treaty modernization offers the best chance for restoring some of the ecological values and environmental services that were lost when the dams were built and that continue to be impacted on a daily basis. The health of the river will benefit if both nations work together towards mutual environmental goals.”

The 2,000 km long Columbia River originates in the Canadian province of British Columbia before flowing south into Washington State. It has been heavily dammed primarily for power, water storage and flood management. The Treaty was first established by the United States and Canada in 1964 to coordinate power production and flood management on the Columbia River. Important provisions of the Treaty are set to expire in 2024 and a window to update or modernize the Treaty opened in September 2014. Over the past 5 years in anticipation of 2024, both nations have begun preparing for negotiations.