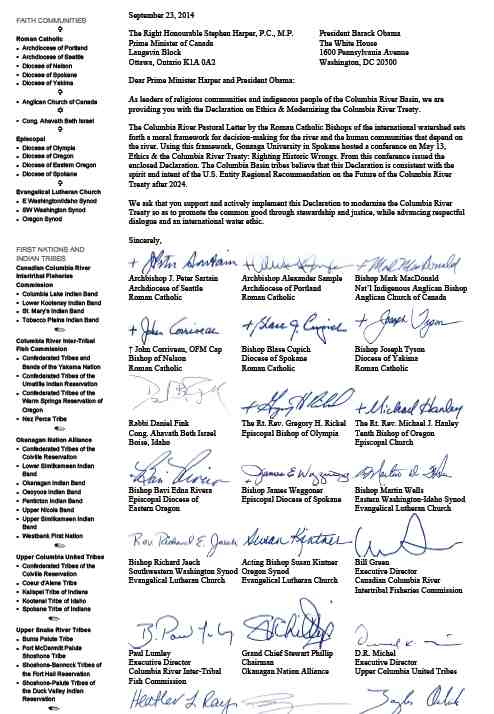 Religious and indigenous leaders this week transmitted to U.S. President Barack Obama and Canadian Prime Minister Stephen Harper a “Declaration of Ethics and Modernizing the Columbia River Treaty,” which they say should serve as the foundation for international negotiations regarding renewal of the Columbia River Treaty. “Both nations need to work together to right historic wrongs and promote water stewardship in the face of climate change,” according to the letter from the religious and tribal leaders. The letter is signed by 14 religious leaders and seven indigenous leaders representing nearly all tribes and First Nations in the Columbia River basin. "The declaration speaks very clearly of how important and critical it is for there to be justice to correct the many years of injustice to the native people of the Columbia basin, including the First Nations of Canada,” said Matt Wynne, chairman of the Upper Columbia United Tribes. UCUT is an organization involving five major interior Columbia basin tribes, the Coeur d'Alene Tribe, the Kalispel Tribe of Indians, the Kootenai Tribe of Idaho, the Spokane Tribe of Indians and the Confederated Tribes of the Colville Reservation. UCUT is focused on ensuring a healthy future for the traditional territorial lands and taking a proactive and collaborative approach to promoting Indian culture, fish, water, wildlife and habitat.