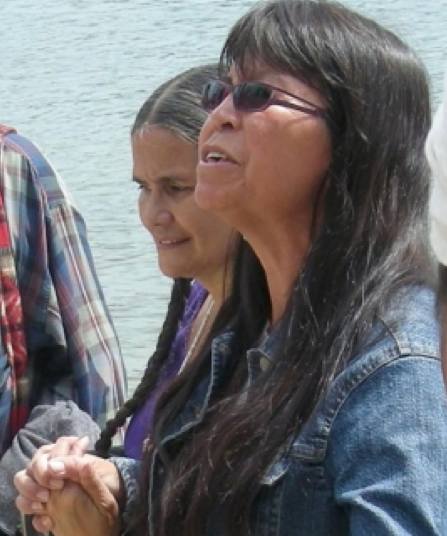 KETTLE FALLS, Wash. — Along a rocky shore where his ancestors gathered for millennia at once thundering but now flooded rapids, Richard Armstrong stepped into the Columbia River to pray.

With eyes closed, Armstrong, a member of the Okanagan Nation Alliance, pounded a rhythm on a small hide drum and prayed and sang in a Salish dialect. His prayers urged the U.S. and Canada to renegotiate the Columbia River Treaty, which has cut salmon off from this stretch of water.

For thousands of years, Native people had gathered at these falls to spear and net the leaping fish. Armstrong is a descendant of the last salmon chief who regulated the bustling fishery.

But since 1942, adult chinook and sockeye salmon returning from the ocean have been blockaded more than 100 miles downstream by the Grand Coulee Dam, a high-head hydropower dam with a massive concrete face 551 feet high. It was built with no provision for fish passage.

The Columbia River Treaty, which was negotiated in the 1950s and signed in 1964, aimed to generate hydropower and protect cities like Portland, Oregon, from flooding by building five high-head hydropower dams. But they didn’t provide for fish passage, and small bands of Native people in the U.S. and Canada weren’t consulted, though they stood to lose a fishery central to their nutrition, economy, religion and culture. Some 2,300 settlers as well as Indians were flooded out of fertile valleys in Canada that now fill and empty like bathtubs by dams built to regulate downstream river flow and light distant cities.

The salmon have been absent here for 72 years — for roughly three human and 15 salmon generations. Is that long enough to seem unchangeable?

“While we’ve protected Portland from flooding, people forget we’ve permanently flooded upriver,” said D.R. Michel, executive director of the Upper Columbia United Tribes (UCUT), a coalition of Northwest tribes. Michel said the reservoirs, which can fluctuate up to 40 feet, have permanently displaced thousands of people,
“We’ve swung so far to the other side, where everything is about bottom lines and profit. It’s just a short-sighted way of looking at things,” he added.

“As a society, we really need to talk about the cost of things,” said John Sirois, a former chairman of the Colville Confederated Tribes who now works for UCUT. “Who’s really being hurt so I can have cheap power and be protected from floods?”

One might think salmon don’t have a prayer to hurdle Grand Coulee or the additional high-head dams (with no fish ladders) that were built after it.

And yet it’s been a summer of prayer up and down the river. In August alone, there were 17 interfaith vigils conducted between Astoria, Oregon, where the Columbia is nine miles wide at its mouth, to Canal Flats, British Columbia, some 1,243 river miles away in the Canadian Rockies, where it bubbles out of the ground.

A common hope expressed at the vigils was that the U.S. and Canada will modify the Columbia River Treaty by adding ecosystem-based function. This is a fancy way to say that dams should be re-engineered for salmon to pass and that water levels be managed to help with migration and to preserve the nests, known as redds, that salmon build in gravelly shallows.

The first chance either party could terminate or change the treaty is in 2024, with 10 years’ notice. That 10 years began this month, and since December, both the Bonneville Power Administration and Corps of Engineers and the British Columbia provincial government — the U.S. and Canadian entities involved — have endorsed adding ecosystem-based function. The endorsements came with a variety of caveats — mainly getting salmon past Grand Coulee Dam, which is often thought to be impossible or prohibitively expensive.

“I was a bit surprised,” said Matt Wynne, vice chairman of the Spokane Tribe and current chair of UCUT. But, he said, tribes had begun talking to the Corps of Engineers and BPA about returning salmon stocks as early as 2008.

Wynne, Michel and others say tribes are not relying solely on an opaque, decade-long process through the treaty, but also seek leverage via the federal Power Act and provisions of individual dam relicensing agreements.

When it came to the treaty, Wynne said the corps and BPA suggested the 15 river tribes in the far-flung Columbia River Basin, which reaches from the Canadian Rockies to Nevada via the tributary Snake River, first make a unified statement. It may have seemed reasonable enough, but Wynne and others knew how often the disparate tribes disagreed. To him, it seemed a cynical ploy to pin failure on the tribes.

Into these undercurrents of politics and history is where Armstrong waded out to pray in what has, since 1942, become known as the Ceremony of Tears. But the mood was different this summer. Rows of people lining the shore behind Armstrong were invited to pick up river rocks off the beach and knock them together, making their own private prayer.

The steady clacking of rocks in dozens of hands, brown and white, beat time along with small drums. When Armstrong ended his prayer, people were invited to throw the rocks into the water so that their prayers might be heard too.

The clacking, it was said, is the sound salmon hear when a free-running river is sluicing at high flood, knocking rocks along the river bottom.

Despite their blocked passage, the salmon still come — or at least they try to. About 150 miles downriver from the ceremony, at the Chief Joseph Dam, constructed below Grand Coulee in 1961, native chinook salmon this summer bumped nose-first into its concrete face.

Randy Friedlander, a tribal member and fisheries biologist for the Colville Confederated Tribes, said it’s almost tragic to watch successive generations of wild chinook batter themselves against this unjumpable obstacle.

“There are still native salmon hitting the face of Chief Joe every year. They’re saying, ‘When are we going to get by this thing?’” he said.

The venerable practice of trap and haul is already an option. For decades, salmon have been netted and transferred into trucks or barges to get around dams. It’s low-tech but cheap.

More complicated systems known as floating surface collectors, or gulpers, have been constructed to get downstream-migrating juvenile salmon past the dams. The tiny smolts are guided through a complicated network of raceways and tanks with the aid of cranes and cable-guided barges.

While gulpers have dramatically reduced smolt mortality, they can cost tens of millions of dollars.

Late this summer, fish cannons have made bemused headlines from Gizmodo to NPR. But Vince Bryan III, CEO at Whooshh, said his company’s innovative solution to fish passage is gentle. The “cannons” are flexible tubes originally designed to move freshly picked fruit without bruising. The tubes work almost like pneumatic tubes in old office buildings, with a slight lowering of pressure in front of an object to create steady movement.

“Clearly the fish needed help, and we had this technology we thought was pretty good at moving stuff very gently,” Bryan said. As Whooshh has gotten more involved with testing and redesigning its tubes to handle live fish, salmon appreciation has deepened as well.

“The Native nations and the First Nations of Canada, certainly what you hear from them is that salmon is a spiritual thing. It’s fundamental to their culture. I think we as humankind have to be looking at it the same way,” he said.

Right now, a projected record return of 1.6 million fall chinook salmon are swimming up the Columbia and Snake rivers. Despite billions of dollars spent on fish passage and endangered species protection, Bryan said that’s only 10 percent of the historical population.

Friedlander said he is confident that salmon, which turn red when about to spawn, will spread like scarlet fire into the thousands of miles of tributary habitat and reclaim their place. They will overcome slackwater reservoirs, silt at gravel nesting sites and toxic heavy metals from smelters. “Salmon seem to be very determined,” he said.

Still, he conducts a private ritual for this outcome.

When he catches some of the first chinook to bump against Chief Joseph Dam each summer, he drives the 40-odd miles to the upriver side of Grand Coulee, where he cleans the fish and returns their remains to the stretch of river that was once their home.

“An elder explained to me one time we have to respect the salmon and take care of it, return it back to the river where it came from rather than throwing it away,” Friedlander said.

“Salmon really is one of our sacraments,” said Sirois. “It goes far deeper than just property or a resource.”