For immediate release: Five myths about freight transportation on the Lower Snake River

Five Myths about Freight Transportation on the Lower Snake River 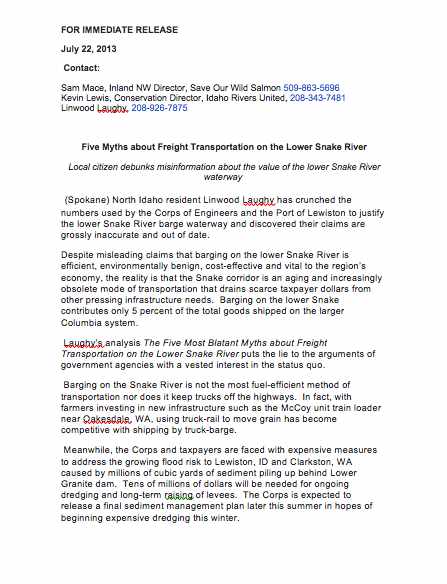 Five Myths about Freight Transportation on the Lower Snake River

(Spokane) North Idaho resident Linwood Laughy has crunched the numbers used by the Corps of Engineers and the Port of Lewiston to justify the lower Snake River barge waterway and discovered their claims are grossly inaccurate and out of date.

Despite misleading claims that barging on the lower Snake River is efficient, environmentally benign, cost-effective and vital to the region’s economy, the reality is that the Snake corridor is an aging and increasingly obsolete mode of transportation that drains scarce taxpayer dollars from other pressing infrastructure needs. Barging on the lower Snake contributes only 5 percent of the total goods shipped on the larger Columbia system.

Laughy’s analysis, The Five Most Blatant Myths about Freight Transportation on the Lower Snake River, puts the lie to the arguments of government agencies with a vested interest in the status quo. Barging on the Snake River is not the most fuel-efficient method of transportation nor does it keep trucks off the highways. In fact, with farmers investing in new infrastructure such as the McCoy unit train loader near Oakesdale, WA, using truck-rail to move grain has become competitive with shipping by truck-barge.

Meanwhile, the Corps and taxpayers are faced with expensive measures to address the growing flood risk to Lewiston, ID and Clarkston, WA caused by millions of cubic yards of sediment piling up behind Lower Granite dam. Tens of millions of dollars will be needed for ongoing dredging and long-term raising of levees. The Corps is expected to release a final sediment management plan later this summer in hopes of beginning expensive dredging this winter.

“My analysis is based on publicly available data and basic arithmetic,” said Clearwater Valley resident Laughy. “The Port of Lewiston is shipping a fraction of what is once did while the costs of maintaining the waterway are skyrocketing. Costs that will be shouldered by taxpayers, not waterway users,” the former educator and outfitter continued.

“This discussion is long overdue. We need a transparent assessment of what these four aging dams will cost both taxpayers and salmon, and how our infrastructure can better serve both fishermen and farmers,” said SOS Inland NW Director Sam Mace. “When bridges are deteriorating and the high-value dams on the Columbia are in need of repairs, are the four lower Snake dams worth their rising costs?”

“The path toward restored salmon runs and an efficient modern transportation system for farmers and shippers may be dam removal. That option is on the table for salmon. Mr. Laughy’s report proves it should also be on the table for taxpayers,” said IRU Conservation Director Kevin Lewis.