TDN: Columbia Riverkeeper: Stronger than ever? 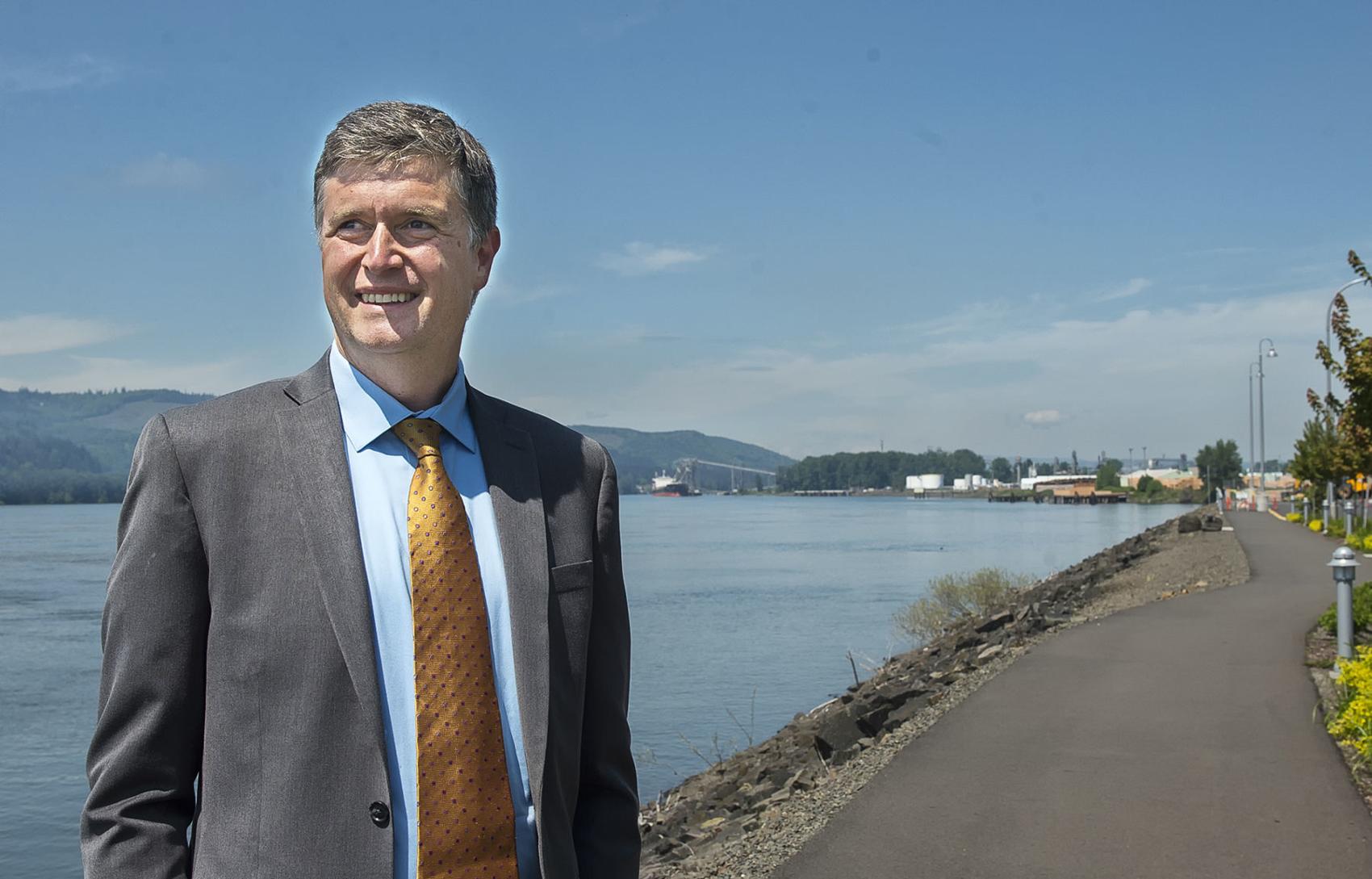 On an overcast afternoon in early May, more than 100 people gathered at the Cowlitz County Expo Center to hear a member of one of the region’s most powerful players over the last decade: Columbia Riverkeeper.

“If you’ve picked up a copy of The Daily News at any time in the past 10 years, you’ve probably read something about Columbia Riverkeeper,” Jasmine Zimmer-Stucky, a senior organizer with the group, joked during a lunchtime talk before the Cowlitz County Rotary Club. The crowd laughed.

But when Zimmer-Stucky finished speaking, an audience member posed a question many members of the of the local business community have wondered for years.

“Is there any development that you do support on the river?” he asked.
Riverkeeper has built a lengthy track record of using state and federal environmental protection laws to thwart big industrial projects along the lower Columbia River, including the proposed Longivew coal export terminal and the Kalama methanol refinery.

Environmental advocates and industrial interests alike agree: Riverkeeper is very good at what it does — even though its critics argue the group’s zeal is undercutting efforts to create family-wage jobs here.

“From my perspective, they’re easily one of the most effective groups in the country,” said Eric de Place, a program director at the Seattle-based Sightline Institute who has worked with Riverkeeper for years. “It’s hard to overstate their importance.”

The Hood River, Ore.-based group has doubled its revenues since 2010, from $382,000 in 2010 to just over $1 million in 2016, according its declarations to the Internal Revenue Service. And it has become a formidable organization with enough clout to make companies think twice before attempting to site major projects in Cowlitz County, according to members of the local business community.

“When it comes to blue-collar communities, you have to give people an alternative,” he said in a recent interview.

Nevertheless, Reuter said he’s grateful for Riverkeeper’s presence.
“You need groups like this to serve as a counterweight to industry,” he said.
Longview resident Sandra Davis, who founded the Lower Columbia Stewardship Community in 2006, said Riverkeeper should get more credit for protecting jobs that depend on a clean Columbia.

“They’ve introduced people to each other who have similar interests and goals,” she said. “That, I think, has been an important role of theirs in the community.”

In recent years Riverkeeper has also stymied plans to develop greenfield sites for industrial use at the Port of Woodland and the Port of St. Helens.

Ted Sprague, president of the Cowlitz Economic Development Council, believes the group is unwilling to accept any new development along the Columbia.
“Even if it’s solar-related, cross-laminated timber, hemp-related, I’ll bet you that when it comes down it, when the pavement has to be poured and electricity has to be used, they’re going to oppose it,” Sprague said in a recent interview.

Sprague said that sentiment is shared throughout the Southwest Washington business community.

“I don’t think you could find one honest business person here who would say Riverkeeper would support industry,” he said. “You couldn’t do it with a straight face.”

Bob Gregory, the former city of manager of Longview, said multiple companies have balked at the opportunity to pursue projects at the 260-acre Kelso Anchor Point property at the mouth of the Cowlitz River — citing potential opposition from Riverkeeper in addition to the Cowlitz Tribe and the state Department of Ecology.

“They’ve taken a step back and said they’re going to cool their jets,” he said.

In late 2017, Kelso obtained a 30 million-gallon water right from the state Department of Ecology for processed water at Anchor Point. Riverkeeper challenged the permit in comments to Ecology, arguing the development would extract massive quantities of publicly owned groundwater to facilitate the construction of chemical manufacturing facilities near important wetlands.

(The water right was ultimately granted over Riverkeeper’s objections.)
Gregory said he’s still very optimistic about the site, which is zoned for industrial development, but he understands why companies would prefer to stay on the sidelines for now.

Port of Longview CEO Norm Krehbiel said he fully expects Riverkeeper to comment during the environmental review of a potential $125 million soda ash export facility. The terminal could eventually be served by up to three unit trains and one cargo vessel per day.

“In the past they’ve come out against vessel traffic and rail traffic,” he said. “It’s a little hard to know what their agenda is.”

‘The most bang for your buck’

Zimmer-Stucky said the group has not taken a stance on most development along the Columbia.

Riverkeeper’s stated mission is protect the Columbia “from the headwaters to the Pacific Ocean,” Zimmer-Stucky noted, but she said the group focuses on “getting the most bang for its buck” by focusing on the lower river.

The group owes its origins to Hudson Riverkeeper,the first Riverkeeper group established in 1966 by fishermen seeking to reclaim the Hudson River from industrial pollution.

Founded in 2001 by former Oregon Congresswoman Elizabeth Furse, Columbia Riverkeeper is now part of a broader global water alliance comprised of more than 300 grassroots organizations. It also sits on panels aimed at shaping government policy and its volunteers monitor water quality and habitat.
Riverkeeper Executive Director Brett VandenHeuvel said in a recent interview that the group has a number of reasons for focusing on Cowlitz County.
The stretch of Columbia that runs through Cowlitz marks the start of the river’s estuary, which holds incredibly sensitive salmon habitat, he said.
Cowlitz’s ecological importance — combined with a spate of proposed fossil fuel projects here over the last decade — have made it a natural battleground for environmental groups and industrial interests, he said.
“If the coal industry and the fracked natural gas industry continue to target the Columbia River, we’re going to continue to stand up for the people of the Columbia,” he said.

VandenHeuvel said the group’s ultimate vision is “a clean and safe Columbia where millions of salmon return every year.”

VandenHeuvel said Riverkeeper has become increasingly focused on projects such as the proposed methanol plant at the Port of Kalama due to the threat climate change poses to salmon.

“Salmon need cool, clean water to thrive,” he noted. “As our climate has warmed up, the river has gotten warmer and it’s getting to the point where it’s too hot for the salmon to survive.”

Wild salmon runs in the Columbia Basin have declined to less than 5 percent of historic levels, which used to reach 10 to 16 million fish annually, according to the Washington Department of Fish and Wildlife.

Riverkeeper successfully challenged an environmental impact statement for the methanol plant before the state Shoreline Hearings Board last fall, arguing the review failed to account for all greenhouse gas emissions related to the project.

“I will give them credit, and I think a lot of credit is due, for how consistent they’ve been,” said Kent Caputo, Northwest Innovation’s chief commercial officer and general counsel. “Their focus has always been on what’s going on along this river.”

The two parties have held meetings several times, and Caputo said every interaction has been cordial and respectful.

But Caputo said Northwest Innovation has been frustrated because the company and Riverkeeper share similar goals.

“We just come at it from such different angles that it’s been very hard to have a meaningful conversation,” Caputo said.

“It’s about understanding the aspects of the project and differences between projects,” he said. “That’s the part we’re striving to find common ground on.”