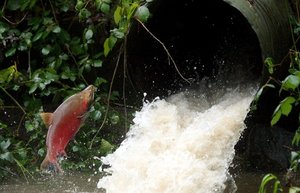 State Attorney General Bob Ferguson goes up against the tribes in the Supreme Court Wednesday, seeking to overturn multiple court rulings calling on the state to fix culverts that block salmon habitat.

A 20-year battle over salmon-blocking road culverts lands in the U.S. Supreme Court Wednesday, in a historic showdown pitting the Washington state attorney general against the U.S. government and Washington tribes defending their treaty right to fish.

Washington Attorney General Bob Ferguson — widely regarded as a liberal champion for his crusading lawsuits for immigration rights and other causes — will oppose the tribes in oral argument before the court.

At issue is whether the state must replace road culverts that block salmon passage. Tribes insist, and courts have affirmed, that the tribes’ treaty right to fish also means the state must not destroy the habitat that healthy fish runs need.

More than 20 tribes in Western Washington have a treaty right to fish in their traditional places, including off reservation, secured in treaties signed beginning in 1854 with territorial Gov. Isaac Stevens. The right was reserved in those treaties in return for the tribes turning over their property right to nearly all of Western Washington.

Washington state and local officials, court scholars and treaty-rights defenders said in briefs filed with the court and in interviews that Ferguson should have let stand nearly 20 years of decisions on the culvert case, first filed by tribes in January 2001.

But Ferguson in a written statement said he disagrees with findings by the lower court, which he says will compel the state to make expensive repairs — up to $1.9 billion by one disputed estimate — that don’t help fish.

“This is a step backward,” said Bob Anderson, director of the Native American Law Center at the University of Washington. “I thought that Bob Ferguson, our liberal darling attorney general, would tell those career people in his office, ‘Look, we are going to live with this. Let’s make it work, take it as an opportunity to do some really good things for the environment’ … Instead, he goes for the nuclear option.”

Gov. Jay Inslee does not support the appeal to the U.S. Supreme Court, his spokeswoman, Tara Lee, wrote in an email to The Seattle Times. “Gov. Inslee and Attorney General Ferguson discussed this case and they don’t agree … the governor supports discussions to settle.”

Hilary Franz, commissioner of public lands at the Department of Natural Resources, filed an amicus brief with the court calling for respect for the tribes’ treaty rights and stepping forward with habitat repairs to sustain salmon runs not only for tribal fisheries, but for all Washingtonians.

Dan Evans, a former Washington governor and U.S. senator, and former Secretary of State Ralph Munro — both Republican luminaries — also filed briefs in support of the tribes and habitat protection. So did local elected officials who contend the state’s appeal undercuts their own efforts to do the right thing.

Tribes are defending a federal court ruling, affirmed by the U.S. Court of Appeals for the Ninth Circuit, that the state can’t block fish passage. That decision and others build on a ruling by U.S. District Court Judge George Boldt in 1974 — upheld by the U.S. Supreme Court in 1979 — affirming tribes’ reserved treaty right to fish in all of their traditional places.

The fight over fishing rights has been one of the ugliest in the state’s history, resulting in violence and reluctance by the state to enforce court rulings affirming the tribes’ treaty right, recalled Tom Keefe, of Spokane, an aide to former U.S. Sen. Warren Magnuson and longtime supporter of Indian treaty fishing rights.
Sign up for Evening Brief

In their 1979 opinion, the Supreme Court justices underscored how intransigent the state had been in upholding Boldt’s decision.

“Except for some desegregation cases … the district court has faced the most concerted official and private efforts to frustrate a decree of a federal court witnessed in this century,” the opinion states. The argument before the Supreme Court Wednesday continues proceedings now underway for nearly 50 years, first brought by the United States in 1970 against Washington to enforce the treaties.

And while the tear gas and billy clubs used to beat tribal members back from their fishing grounds during the fish wars are gone, the state is still fighting its treaty obligations, Keefe and others said.

Ferguson said he agrees the state must do more to repair habitat. But he disagrees with the findings by the lower court.

“Salmon are vital to our way of life here in Washington,” Ferguson said. “Regardless of the outcome of this case, the state must do more to restore salmon habitat. The Legislature should not need a court order to fix culverts that are blocking salmon runs.

“However, important issues are at stake in this appeal, as explained by the many dissenting Ninth Circuit judges,” he said, referring to nine judges of 29 on the Ninth Circuit who wanted to take the appeals-court ruling under review. In their dissent in the May 2017 ruling, the judges said the lower-court mandate to protect habitat for fish is overly broad and could be extended to block all kinds of other development, including dams.

Ferguson also said the Ninth Circuit’s decision forces the state to expend significant resources on fixing culverts that will not benefit salmon, because of other habitat problems.

“That makes no sense,” Ferguson said. “The decision also requires Washington taxpayers to shoulder the entire financial burden for problems largely created by the federal government when it specified the design for the state’s old highway culverts. That’s not fair.”

The cost of the culvert work is disputed.

The Department of Transportation had estimated the cost of repairing more than 800 culverts within the case area at $1.9 billion over the course of the 17-year schedule.

However, the court of appeals affirmed the district court’s finding that the department greatly overestimated both the cost and the number of culverts that need to be corrected within that time frame. The state also can expect funding from the federal government for culvert repairs it must make anyway, regardless of the court case, the appeals court found.

Ferguson’s argument that the lower-court rulings force repairs that will do no good has not been reflected in work underway.

The Washington Department of Transportation, with the most culverts along the 7,056 miles of Washington highways, is working on repairs and replacements, its 2017 report on the problem shows. A two-prong approach has been underway in which the department makes culvert repairs whenever it is already at work on a road. It also repairs culverts on a prioritized list, as required by the lower-court ruling, collaborating with tribes and other agencies to target repairs on streams where they will do the most good.

Since the culvert case was filed in 2001, the agency has completed 319 fish-passage barrier corrections, allowing access to approximately 1,032 miles of potential upstream habitat.

That is the work that must continue, critics of the appeal said, instead of fighting the tribes in court.

“This is disappointing at so many levels. It is a slap in the face to tribes, and it is not good for salmon,” said Mark Trahant, editor of Indian Country Today, and a member of the Shoshone-Bannock Tribes. Win or lose, the state is going to have to make the repairs anyway, because people want salmon to survive, Trahant said.

“The people want fish. Of all the metaphors of the Northwest, the mountains, the fish and the waters are just linked to our souls.”

Jay Julius, chairman of the Lummi Nation, said he will be in the audience as the U.S. Supreme Court hears arguments Wednesday and that he hopes he carries the prayers of his people and citizens all over Washington with him.

“The tribes being in the forefront, having the fortitude to take this on, be bold, be strong, and demand accountability and change, it is good for everybody,” Julius said. “Therefore, send some prayers. If we lose, the salmon lose. The rivers lose. The streams lose. If the tribes lose, we all lose.”